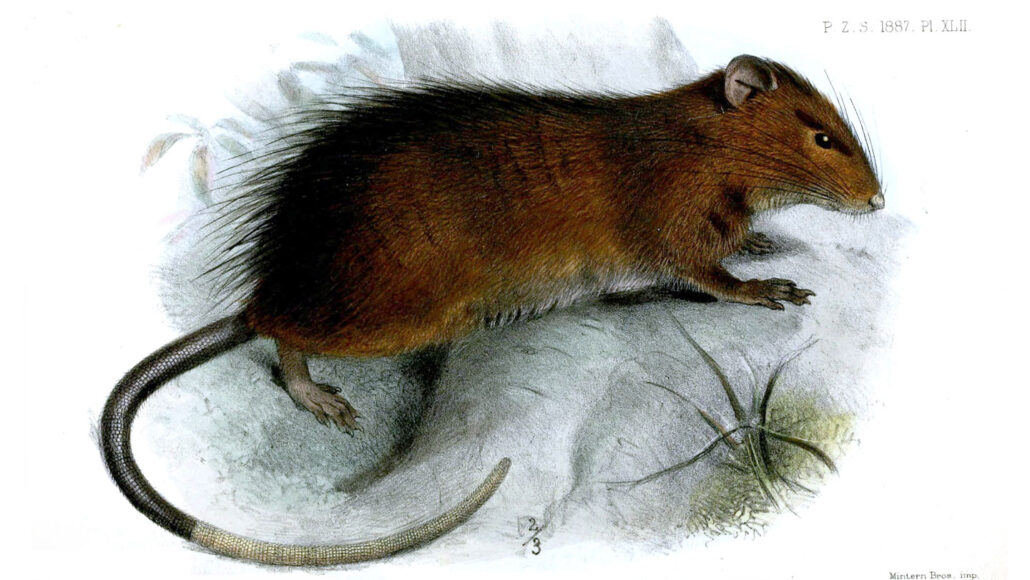 Before the early 1900s, if it walked like a Christmas Island rat and talked like a Christmas Island rat, it probably was a Christmas Island rat. But if one of these now-extinct rats ever walks the Earth again, it will most likely be a genetically modified Norway brown rat. And the rodent won’t be as similar to the Christmas Island rat as some would hope, a new study finds.
With the advent of gene-editing technology such as CRISPR, scientists have shifted from cloning to genetic engineering as the most promising method for “de-extinction,” or the resurrection of species that have died out (SN: 10/7/20). But unlike cloning, genetic engineering wouldn’t create an exact replica of an extinct species. Instead, the technique would edit an existing animal’s genome so that it resembles that of the desired extinct animal. The challenge is making that proxy as similar to the extinct species as possible.
To explore the limits of this method, researchers attempted to recover the genome of the Christmas Island rat. By comparing fragments of the extinct rat’s genetic instruction book with the genome of a living relative, the Norway brown rat, the team was able to recover about 95 percent of the extinct genome. That sounds like a lot, but it means that 5 percent of the genome was still missing, including some regions that were important to smell and the immune system, scientists report in the April 11 Current Biology.
“You can only bring back what you can find. And our point is we can’t find everything,” says Tom Gilbert, an evolutionary biologist at the University of Copenhagen.
To get the extinct rat’s genome, Gilbert and his colleagues took ancient DNA from two preserved skin samples of the Christmas Island rat. Ancient DNA, extracted from specimens that died anywhere from a few decades to thousands of years ago, is far from perfect (SN: 5/19/08). Gilbert describes an extinct species’ genome as a book that has been shredded. One way to reconstruct this shredded book is to scan the fragments and compare them with a reference.
With an intact copy of the original book, someone could theoretically reconstruct the book perfectly. When identifying a reference genome, researchers look for a species that diverged evolutionarily from the extinct species fairly recently — in other words, a very similar book. The genomes will match closely, but not perfectly.
For that reason, the Christmas Island rat (Rattus macleari) was an obvious choice for analysis for the scientists. It diverged from a close relative, the Norway brown rat (Rattus norvegicus), only around 2.6 million years ago.
The team found that the Christmas Island rat genome mapped to about 95 percent of the Norway brown rat genome. Further analyses showed that the roughly 5 percent that was missing could not be explained solely by a flaw in the technique or an inadequate reference genome. Rather, because of evolutionary divergence between the two species, most of that genetic information was simply lost.
What’s more, that missing information wasn’t random. Genes that were partially or completely missing tended to fall within two main regions that controlled the rat’s immune responses and sense of smell. So, if a Norway brown rat’s genome was edited to resemble the Christmas Island rat, the new critter would smell in a different way than its prototype did. This could hinder a proxy Christmas Island rat’s chance at survival if it were released into its former habitat.

Norway brown rats (shown) and extinct Christmas Island rats are close relatives. But the rodents have still diverged enough evolutionarily to make using genetic engineering to de-extinct the Christmas Island rat difficult.
Gilbert doesn’t think it’s likely that anyone will try to de-extinct a rat. But he says that what the team has demonstrated could prove useful for people working on even more ambitious projects, like bringing back the woolly mammoth. The divergence between the Norway brown rat and the extinct Christmas Island rat, for example, is similar to that between the Asian elephant and woolly mammoth.
"By doing these kinds of analyses, which is not hard to do, you can at least come up with the what will you get, what will you not get, and you can use that to decide is it worth doing,” Gilbert says.
Despite the hurdles, using the technology to bring back species is still worth doing, says Ben Novak, lead scientist at Revive & Restore, a nonprofit that uses genetic engineering for conservation projects. He plans to apply Gilbert and colleagues’ analysis to his own work on the passenger pigeon, which went extinct in 1914. There are possible solutions for how to capture some of the missing data, he says, but the fact that some data will always be missing is a limitation that de-extinction scientists have already come to terms with.
“The reference assembly problem will always be a barrier to de-extinction,” Novak says. “Anyone pursuing de-extinction has to settle on the fact that we want to get as close as we can to something that fools the environment.”
In other words, a de-extinct mammoth created using gene editing, if such a thing ever comes to be, won’t exactly be a mammoth; it will be closer to a hairy Asian elephant adapted to live in the cold. And the new analysis suggests that the proxy animal version will probably have enough differences that would make it difficult for the creature to refill its previous ecological niche. For some, that might be enough to defeat the purpose of the exercise.

Read the article from here- https://www.sciencenews.org/article/crispr-de-extinct-christmas-rat-species-gene-editing