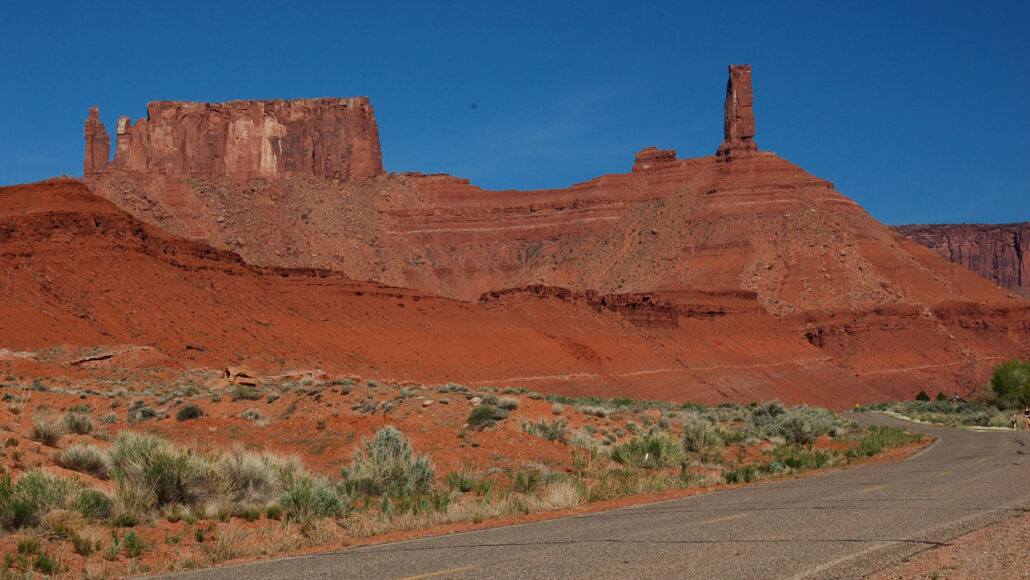 As Kathryn Vollinger prepared to climb Castleton Tower, a 120-meter-tall sandstone formation in the desert near Moab, Utah, the outdoor guide assessed her gear. Ropes? Check. Helmet and harnesses? Check. Climbing rack? Check. That day in March 2018, Vollinger’s checklist also included an unusual piece of equipment: a seismometer. The excursion wasn’t solely for pleasure; it was also for science.
Castleton Tower and its peers may appear still. But these soaring geologic structures are in constant motion, vibrating in response to earthquakes, human activity and even distant ocean waves. The same goes for fins, rock formations that are irregularly shaped instead of cylindrical or rectangular like towers, says geophysicist Riley Finnegan of the University of Utah in Salt Lake City.
The seismometers measure how much the towers and fins naturally vibrate. Those data are key to assessing the formations’ stability and could even help researchers search the rocks for possible signs of seismic activity in the distant past (SN: 3/15/06).
Such insights are important not just to scientists, but also to Native Americans, including the Eastern Shoshone, Hopi, Navajo, Southern Paiute, Ute and Zuni peoples. Many of the landforms, which are located on the traditional lands of these groups, hold cultural and religious significance, Finnegan says.
Finnegan’s team has been working with Vollinger for nearly five years to assemble the first dataset on the dynamic physical properties of 14 towers and fins, which the researchers published February 16 in Seismological Research Letters. Without experienced climbers like Vollinger on board, the project wouldn’t have been possible, Finnegan says.
Collecting the data was a tremendous challenge. Safely scaling the trickiest formations requires climbing chops, strength, endurance and a sizeable dose of planning. “There’s only so much risk I’m willing to take for getting those seismometers up,” Vollinger says. “When you’re hauling extra gear, that adds another element to it.”
Vollinger and her climbing partner, husband Nathan Richman, had to ensure that the rock faces were vertical enough to avoid dragging the equipment. Dragging would “likely knock loose rock off,” she says. Once Vollinger reached the top of a formation — after anywhere from one to six hours of climbing — she read books or chatted with her husband while a seismometer collected data. They then hauled the instrument and their other gear back down.
Back at the University of Utah, Finnegan and colleagues analyzed the data, finding that the structures’ lowest natural frequencies — called fundamental frequencies — range from 0.8 to 15 hertz. In other words, the towers sway roughly one to 15 times per second.
The team also used computer models to study the ways in which the formations bend and twist at a given frequency. Those simulations helped provide a more complete picture of how physics influences the behavior of towers and fins, Finnegan says.

Outdoor guide Kathryn Vollinger carries equipment through rough terrain on the way to climb one of Utah’s many red rock tower formations. Vollinger has been helping geophysicists study the geologic structures for nearly five years.
What’s more, inputting the height, density, cross-sectional area and other material properties of the formations into the model predicted the formations’ fundamental frequencies.
The findings “strengthen our understanding of the dependence on height and width for the [fundamental frequencies] of these features,” says Ramon Arrowsmith, a geologist at Arizona State University in Tempe who wasn’t involved with the work. Finnegan and her colleagues have proven that “the geometry is sufficient to really talk about the dominant frequencies for the behavior of the pillars.”

Read the article from here- https://www.sciencenews.org/article/red-rock-formations-utah-seismic-stability-climbers-geology