US traders can now buy/sell EOS on BlockTrades 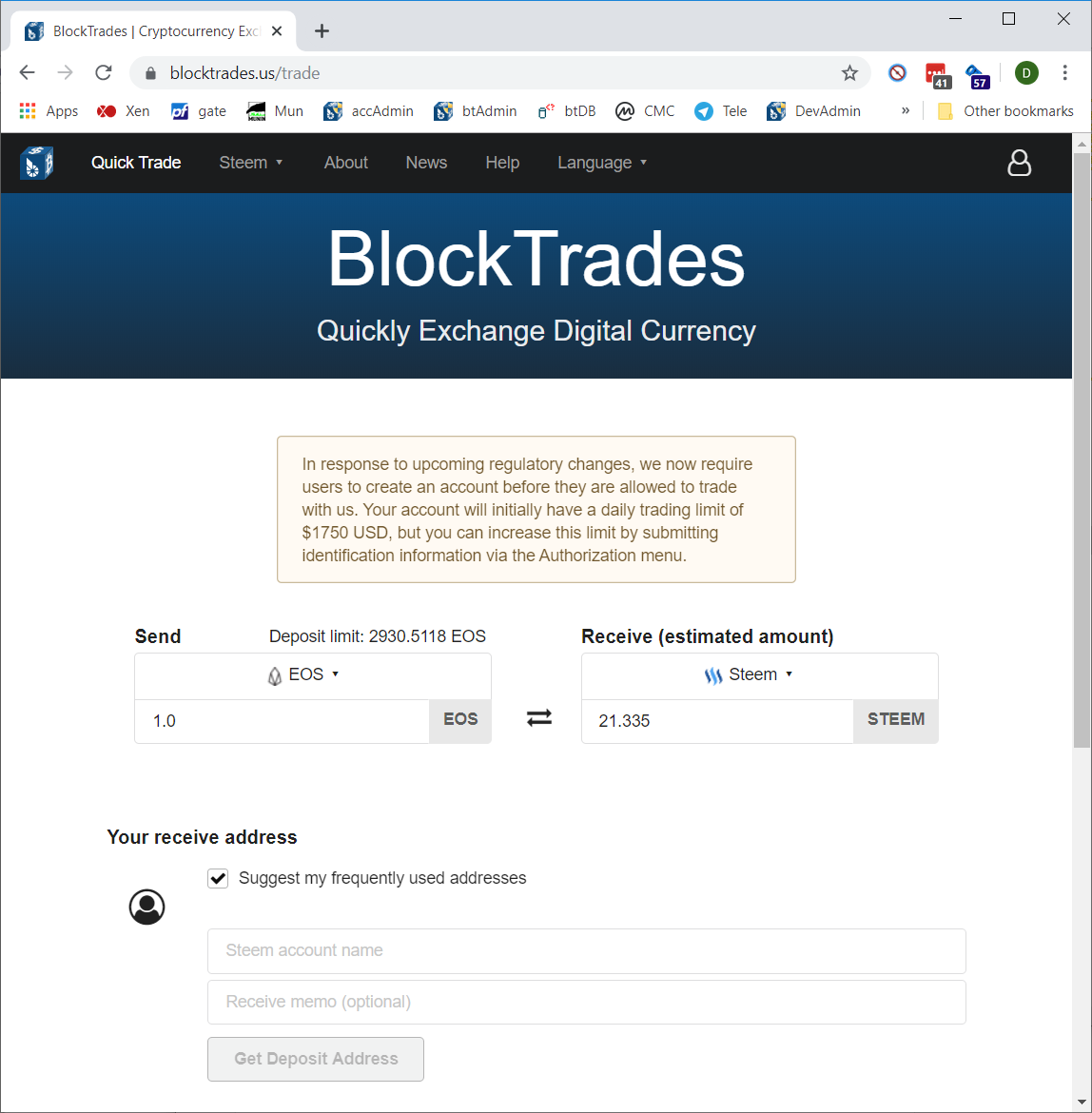 Previously, we required users to prove they weren’t US citizens or residents before we allowed them to buy EOS on our site, because we were concerned that the ICO that was done for EOS made it an unregistered security.

The lawsuit that was recently settled between the SEC (US securities regulator) and BlockOne (the creator of EOS) indicates that our concern was somewhat warranted, but it seems that the SEC decided that while the initial ERC-20 token that was distributed as part of the EOS ICO was a security, they apparently don’t consider the mainnet EOS token a security. Our best guess is that they are classifying the “real” EOS token as a utility token, similar to the way they decided that Ethereum is no longer a security.

This decision means that we can now allow US citizens and residents to buy EOS on our site. And this is good news for our non-US customers as well, because they won’t need to provide KYC info to prove they aren’t US citizens.

On a related note, our EOS wallet was under maintenance following the EOS hardfork for quite a while. This was due to challenges associated with replaying the blockchain from scratch to adjust for the new hardfork rules. We've finally got our EOS node operational again, and we've also built new infrastructure to take snapshots of the node's database to reduce the chance that we'll experience downtimes of this extended duration in the future.

What a breakthrough. Good news it is. Well done. The efforts behind the scene is paying off hugely. Thank you for your tireless efforts.

I am wishing all the best for your business and congrats to US customers, they will be happy to learn this @blocktrades : D

Good to know. 😘 thanks for the update.

Kindly confirm whether non-us customers can use @blocktrades without signing in to convert crypto or not? Do we still need to provide kyc information?

You don't need to provide KYC info to trade with us, unless you want to trade greater than $1750 USD worth of crypto in a day. You still need to create an account with an email address, however, so that we have a point of contact if there's any problem with a trade.

Okay thanks for the clarification!

this is big for US people

Good! I was trying yesterday and it was

Thank you very much, now I can trade EOS/STEEM

Good jhob @blocktrader i like it. Thanks you verry much

very cool. always good to have additional ways to get steem in and out! :)

nice - do you think about add BAT?

It's possible I guess, I'll ask our legal team to research it.

It looks like the next token we will probably add will be XRP (i.e. ripple).

Thx for the quick response.

1 USD has been spent to promote this content using Steemium thanks to @zer0hedge.
Learn more here!

Great news for the crypto world. EOS is one of the few crypto assets that functions for products and services.
These value adding platforms are what I think will be the winner in the future.

Now That Reggie Middleton has settled with the SEC, Do You think you will have VERI Tokens trading on Blocktrades in the future too ??

Is block trades down again now?

Dear sir please tell me the secret about your balance like this. I can't even imagine after seen your unbelievable status. To be honest I'm little bit greedy now. Please guide me which type of post you upvote? Sorry to ask silly question but I don't have any option except directly ask.

I have Upvoted and following you.
Please do the same, if possible.
Thank you so much for your love!

Hi @blocktrades! What a wonderful surprise. Thank you so much for you support. It is greatly appreciated!

@blocktrades thanks guys for doing so much for this blockchain. I really appriciate everything and still voting on you as a witness after updating all my votes today. Please check that here : Updating my witness votes once in a few months !

It all sounds very complicated to me. The more time passes by the more registration is needed. The once promoted benefits of cryptocurrencies are gone by long. I try to understand who or what exactly caused it. EOS or Givernments? And what will you do with all the ID's (proof) you collected? Thank you for answering. 💕

It's not that complicated: 1) if you don't plan to trade more than $1750 USD worth of crypto per day, you can register with just an email address. For larger amounts, you need to provide identity details. And in that case, we only use the ID's to verify the identity data we're given.

@blocktrades only ID means the same in the Netherlands as passport.

I tried many times and at first it was just e-mail but after some weeks I suddenly had to give all info, ID, drivers license, bank account, photo, etc etc Nearly each wallet did it. So I gave up on them. I never traded such high amounts. ❤️Posted with ![](https://cdn.steemitimages.com/DQmbroYujK9LNd2s8zDKPUCADmseyJDuNbhwBPrrF7xM8FL/logo-comment.png)

If you're trading small amounts with us, you only need to give email. I'm quite sure about this.

@blocktrades I am sure I did and after some weeks they asked for everything and more and I gave up on it. Posted with ![](https://cdn.steemitimages.com/DQmbroYujK9LNd2s8zDKPUCADmseyJDuNbhwBPrrF7xM8FL/logo-comment.png)

I guess you were talking to some different exchange, not BlockTrades. I've reviewed all our communications with you, and I don't see any request for identification documents from us.

@blocktrades very strange than I wonder where it came from. 🤔 Posted with ![](https://cdn.steemitimages.com/DQmbroYujK9LNd2s8zDKPUCADmseyJDuNbhwBPrrF7xM8FL/logo-comment.png)

Not sure, but if you want to send me a copy of the request (I assume it's an email?), I'll take a look at it. You can send it to our support email address...

A little while ago I had an issue with a transaction I made to withdraw my Bitshares from steemit's market steem-engine, I got mixed up thinking I could send it to blocktrades so this is what I did, I sent just over 50 Bitshares to your steem engine account memo and all! I was intending for blocktrades to send my Bitshares to my openledger account, although this of course did not compute and so the transaction has not happened in the way I had expected. If you go to steem-engine.com you will find I have sent you Bitshares Pegged. I m hoping we can arrange a refund back to my steemit account, as this would be fair for any amount that was accidentally mistaken the same way.

Here is a link to the post I created at the time when I was not sure what had happened.

Thanks for your help.

@blocktrades I threw all info away.
The messages popped up too as I tried to use it. I checked all info and noticed there was no reason to give all info because I never change high amounts. Everything was fine and it was still asked.
I even tried but my connection was too slow to send it all and I do not know if this was with you only but also other wallets. They said it as ahead of a change coming up... I gave up on all of them already longer ago and only use one now.Posted with ![](https://cdn.steemitimages.com/DQmbroYujK9LNd2s8zDKPUCADmseyJDuNbhwBPrrF7xM8FL/logo-comment.png)

Ok, it must have been some other place. We only ask via email, and only if someone makes a transaction that is greater than $1750 USD.

A little while ago I had an issue with a transaction I made to withdraw my Bitshares from steemit's market steem-engine, I got mixed up thinking I could send it to blocktrades so this is what I did, I sent just over 50 Bitshares to your steem engine account memo and all! I was intending for blocktrades to send my Bitshares to my openledger account, although this of course did not compute and so the transaction has not happened in the way I had expected. If you go to steem-engine.com you will find I have sent you Bitshares Pegged. I m hoping we can arrange a refund back to my steemit account, as this would be fair for any amount that was accidentally mistaken the same way.

Here is a link to the post I created at the time when I was not sure what had happened.

Thanks for your help.

is there an issue with support ? i never had to wait this long for an answer ... when i try to send EOS from poloniex i get "invalid memo" on the memo you provide ...

i put in two tickets, im sure something just went wrong along the way from here to america .... that's a long cable :)

A lot of my voting power is indirectly delegated out to curation groups like cervantes and ocd via wise. Personally, I tend to vote most on steem-related projects and a few contests.

I sold 2759 Steem in exchange for .05 BTC. The website where my wallet is located sent me an email stating that they had migrated to a new Bitcoin node and the old transfer addresses would not work.

Is there anyway the BTC can be transferred to a different wallet address?