Twist on Traditional Latkes (Gluten Free and Vegan Too) 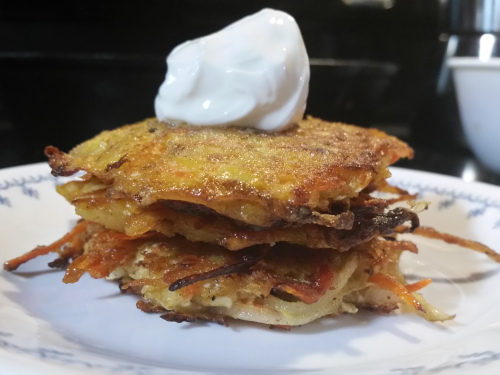 Latkes are an important food often served during Hanukkah.Traditionally, only potatoes and onions are used, and eggs and a gluten binder are included. When I saw the beautiful pictures of this yummy dish on my social media feeds, I was inspired to create a gluten free (and a vegan) option for my family.

We minimize food waste by putting scraps of leftover herbs and parts of veggies into the freezer to save for bone or veggie broth. Even garlic and onion skins go in our pot. This recipe is another great way to use up bits and pieces.

Latkes are also a crunchy, satisfying way to sneak some nutrient dense food into my food-hesitant seedling’s belly - he eats them right up! A basic recipe follows, but feel free to experiment.

•Mix with two free-range eggs, or for a vegan version, use a flax egg replacement. Mix 1 tbsp of ground flax seed with 3 tbsps water and let sit for 5 minutes. One flax egg equals one traditional egg. The flax brings a toasty, nutty flavor to the latkes - very yummy.

•Add ¼ c. arrowroot flour to start and have more on hand if the batter gets too watery. As the veggies sit, they may release water.

•Add salt, pepper and a little smoked paprika to taste. You can use any other spices you like.

•Scoop a handful and flatten out on a preheated cast iron skillet with lots of good oil for frying. We use saved pastured bacon grease and grass-fed butter with the egg version, and avocado oil for the vegan flax seed version. Both are very tasty.

•Fry for about 4 minutes on medium low heat or until golden brown and crispy on both sides.

Serve with the traditional sour cream or applesauce, and a homemade pickled pepper on top.

I am grateful to find a place with rich soil to grow a community. May we take root, and flourish together.

All artwork, photographs, and content are original and created by @bia.birch unless otherwise credited

There can NEVER be enough versions of latkes!!! YUMMO!!! I am INSPIRED to get in the kitchen the moment we get back into Thailand on Wednesday.

That looks interesting, thanks for the recipe!