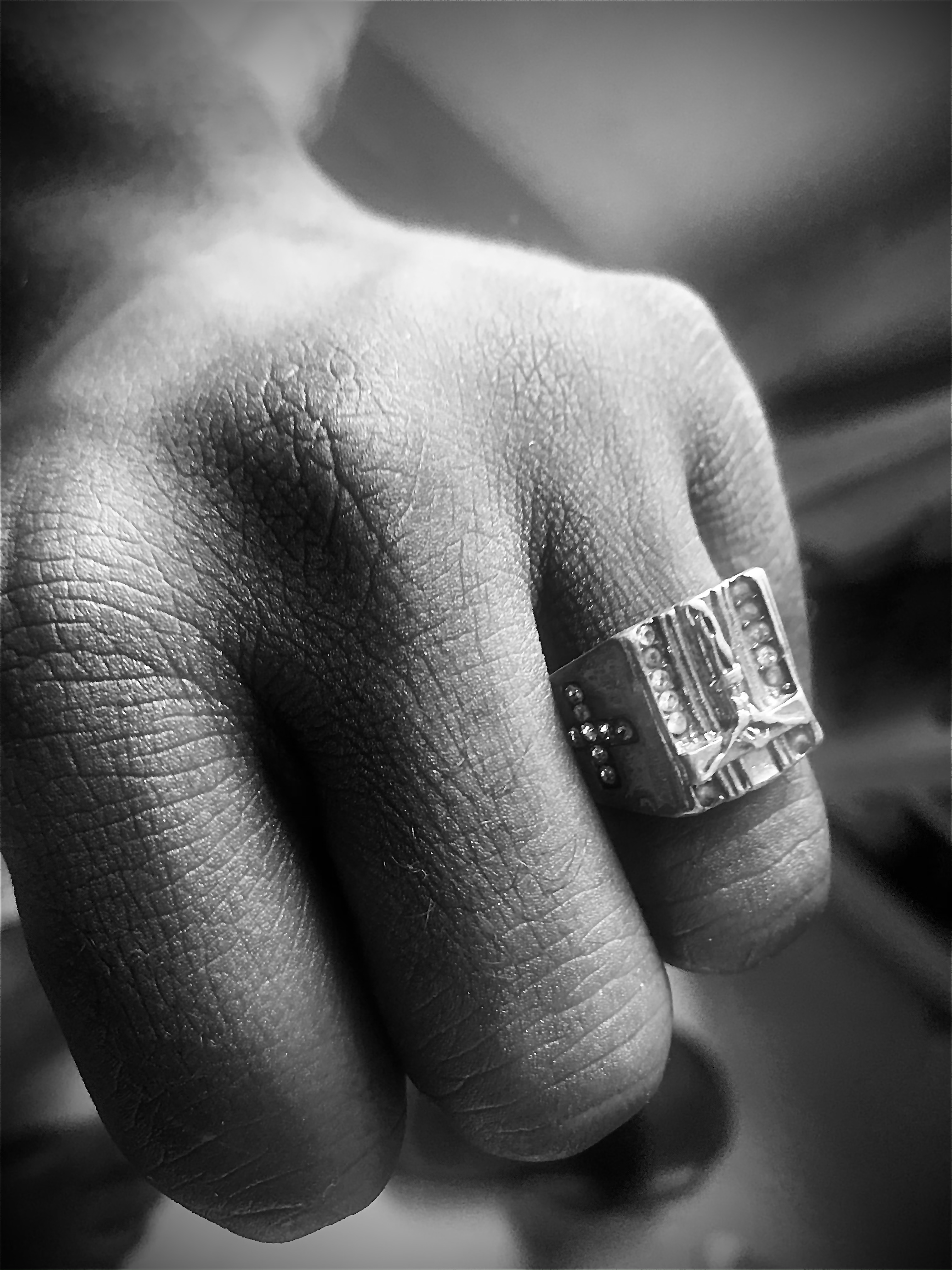 I was travelling in a commercial bus once and I sat next to this young man who was in his mid-20s. He was following his aunty to stay with her family in the town (she actually sat in front with the both of us sitting behind, amongst other passengers). It was actually a rough and long journey because the vehicle kept breaking down and our driver doubled as a mechanic all through.

After some time, I and this fellow got talking. He asked a couple of questions and while I responded and asked in return, I noticed his openness and vastness in experience. He started sounding quite metaphysical but nothing had really unravelled this clearly, until we came across an accident scene then he made a statement, “guy; don’t be surprised if nothing happens to the driver of that vehicle. Many of these drivers wear charms and escape unharmed even after ghastly motor-accidents”. Then he displayed a complicated smile and shook his head seeming lost in thought.

I suspected he had more to say if I was ready to patiently listen, so I grabbing the opportunity and questioned further, “why are you sounding like you have seen drivers with these charms before? If it is to hear, we all have been hearing but have not seen”. He laughed at me and said:

“See this guy oh, e dey show for face? They simply receive it na! For many, the powers are inside the rings they wear. Have you not seen such magical rings before?”

“I have heard such before, but I haven’t seen any myself”, I replied.
“I know where they do such rings sef”, he said.
“Really?! But what work does it do?” I asked further.

“It depends on the function you receive it for, but I know most of them are for protection: protection from enemies and from accidents. If you wear it, bullets cannot penetrate you. Sometimes if you have it on, if danger is ahead, it alerts you automatically, and if you are travelling, if accidents happen you will disappear from the car immediately”. He replied. “Some do it for money too, but that requires greater sacrifices”.

Then I burst into laughter.
“You do not believe me?” He said desperately.
“Guy, Guy, Guy, those are usual talks now”. Then he tapped me and said, “Listen, I have received this charm before. So I know what I am talking about! In fact, see my ring here!” (He reached out to his shuttle bag and brought out a silver-coated ring). I courageously adjusted my sitting position stylishly.

I had to play mature so I let him continue with his narration. He continued:

“Two years back, many young boys in my area still in Secondary school joined cult groups and started terrorizing the whole neighbourhood. They could just enter our homes and beat up our parents or the boys in the house and ask for anything or any amount or intimidate us in the house and they were fearless in school. Even Teachers feared them. After much endurance, one day, a friend of ours who was also a very good church boy ran to us and told us he had found a solution. He told us he found a man who cooks protection-charm for people, even young boys. The charm does three things; firstly, if you slap anyone in anger, that person will immediately begin to feed on grasses. Secondly, if you are travelling and any accident happens, you will disappear before the havoc occurs and thirdly, nothing metal, be it bullet or knife can penetrate your skin for as long as you wear the ring after he ‘cooks’ you”.

Interesting! So how did you validate all the claims to know if all these assurances are not fake? I asked. He responded,

“Ah, I was made to stand and was shot severally and all I heard were just gunshots. You needed to see how I stood gallantly!”

How about the enemy-eating-grasses-charm how did you test if it works?

“Very simple na!” He replied, “The baba asked me to bring a dog which I did and chained: after wearing the ring, I slapped the dog and watched this dog eat grass non-stop. I had to speak to the ring before the Dog stopped and later died. I have used it on some persons who tried me before and it was not funny. So with it, I might zoom off from this vehicle if anything happens now; but God forbid (he said sarcastically)”.

I was dumbfounded. I asked if any of his friends who received the charms with him had died and he said “yes”. He told me after a while, the charms needed to be renewed but that they could not afford what was demanded by the native doctor and so their rival (cult) group went and fortified themselves the more and started killing them one by one. He told me he also noticed his charm had faded and that his ring (that scared me earlier) was now just a powerless piece of metal. So considering his vulnerability, his aunty from the town was called by his parents (who never knew what he was into initially) to come and take him away from home to the town before it gets out of hand.

But bros, are you a Christian? I inquired; “Sure man! I am. A strong one at that!” He said with impeccable conviction. So how did you cope with the lifestyle this long? “I pull off the ring whenever I am in church and pray to God too like every other Christian, but my conscience kept troubling me. But my consolation is that I do not belong to any cult group, I just chose to defend myself and my family from bad boys. At least, compared to those cultists, mine is a lesser evil”.

So what do you intend to do now that you are changing environment?
“Honestly bro, I hope not to return home anytime soon. Then, if I settle down, I will meet the priest in the new parish and share with him as I have done with you and ask for deliverance and dispose the ring afterwards. I believe it is just God who has kept my life until now else…I will also watch the kind of friends I keep subsequently”.

Beautiful! I guess you have said it all. Your openness shows to a large extent that you willing, able and ready to make amends. I encouraged him to build a personal relationship with God. Then I prayed with him and we all took our different paths to our destinations from the park. I hope and strongly believe that by God’s grace, that brother is somewhere serving God in spirit and in truth now.

I would have loved to stop there but let me add something small. Listen, different difficult circumstances has pushed many people into unbelievable and unimaginable reckless and terrible decisions. Some have committed abortions, some have killed, some have used others for rituals, some have joined cults, some are keeping all sorts of immoral relationships, some are into examination malpractices, some are missing from their homes, some are corrupt to their bone marrows, some are abusing children and stealing and some are into drugs and are scamming people. Many of these people are still bearing the identity as Christians but have lost connection with Christ.

In the eyes of Jesus they are not ‘dead’ but ‘sick’. You remember what God said to Adam and Eve? If you eat of the fruit you shall surely die! Spiritual death! That disconnection from their truest source of life and happiness. You may be deep into sin; sins of any kind and the devil may be assuring you of your ticket to hell and so he has talked you into enjoying the fact that you have sold your soul to him, so you should enjoy earth to the fullest, but that is a fat lie!

Stop justifying the fact that you are comfortable in sin and that you are better compared to others. Stop gambling with your soul and with the little time you have to make amends with God. Wake up and run to God without looking back. If he could receive the prodigal son, he would receive you back. Stop abusing God’s mercy and stop misunderstanding grace. I read somewhere recently that the difference between grace and mercy is that mercy won the Prodigal son a second chance while grace won him a feast.

May God grant you the boldness to stand alone but by Him today in this difficult times, so as not to stand alone in shame on the last day. Dear friends, lets us drop our rings of sin. They will someday expire or deny us our deepest longing –God. post link

Thank you so much am grateful

If you have not already done so, you should head to the newcomers community. Not only will you earn money through upvotes, you will learn about content etiquette;

You are currently in Stage 1 of our 4 Stage Process:

👉 Stage 1 - 1st Warning - Pointing offenders towards Achievement 3 and highlighting this process. All plagiarised posts currently pending rewards will be flagged and downvoted to $0 rewards.

Stage 2 - A Final Warning - Another request to stop and that plagiarism will not be tolerated. Downvotes amounting to 20% of total pending rewards according to steemworld.

Stage 3 - A stronger message - Downvotes amounting to 50% of pending rewards.

Notification to community administrators and moderators:

Thank you, for bringing this issue to us, we really appreciate your work, thank you very much.

I have the right to share this article and because of your comment I have placed a link thank you!

This is the last warning, don't post plagiarism on Steemit!

It is a mistake, I have added a link to all the posts. thank you

Plagiarism is when you take information that does not belong to you and present it to others as your own. It is also plagiarism to cite the whole text exactly, even if you add a source.