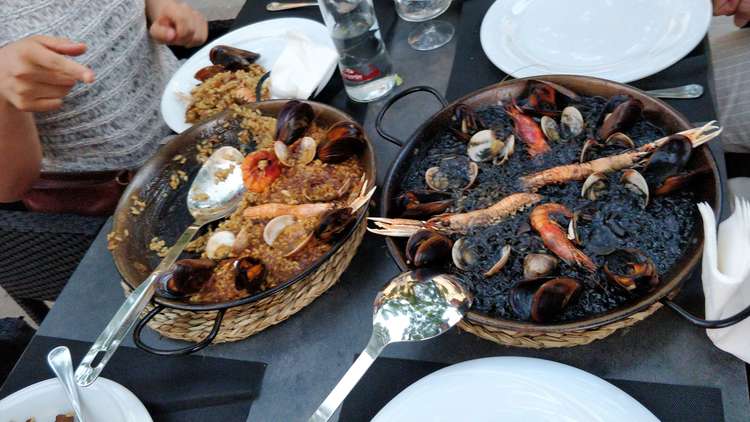 Summer is a great time to be travelling around in Spain... the mixture of warm weather, outdoor eating and stupendously good food at prices that just are not possible in more nothern parts of Europe make it the perfect destination for anyone who enjoys eating! Even if you don't enjoy eating... you will after a few days down here!

My concert tours do take me quite regularly to Spain, and I'm always crazily happy about that... it means for a few days, I'll have access to great food! (Not that we don't cook decent food at home... but I have a great excuse to go out and eat at restaurants!).

This tour over summer did drop us in some smaller towns of Spain... which meant that we were doing some frantic Googling to see where would be a nice place to eat. One double edged bonus about doing concerts in Spain is that concerts start really late... which means that you aren't rushed for the dinner after the pre concert rehearsal!

To be honest, we never actually entered the restaurant! All the seating outside was just too good to pass by, so we just plonked ourselves down without even bothering to have a look!

It was pretty hot, so a touch of exhaustion played a bit of a part in that choice as well... the indoors was air-conditioned... but there was no one in there except for the staff.

Outdoors, you have a bit of strange seating in the wide median strip between two small lanes... it's not ideal to be between the cars... but thankfully, it isn't busy... and you get the benefits of the tree shade!

The classic Spanish rice dish (Paella) is the specialty for this restaurant... so a good portion of the menu is devoted to various variants of the dish. You can get black squid ink, with meat... without meat... all tastes are catered for!

There is also a list of small nibbles (tapas) available for before the main event... all of which looked really quite tasty... but I just don't have the stomach size to order one of everything!

Usually, in a situation like this... the set menu is one of the best choices... unless you have something specific in mind that you want to order, it is the perfect beldn of choice, price and the restaurant specialty.

Leading the evening of eating is the calamari.... brumbed and deep fried, it was perfectly cooked... not overcooked, which can often be a problem, which leads to chewy squid... This was nicely tender and the crumbing lent a really nice texture to the outside, nice and crisp!

This was followed by a mixed salad... with tuna. I'm never really sure why people add tuna to salad? For me it is a strange addition... it's not like fish are often seen in the environment of tomatos and lettuce...

Anyway, that said... it was a nice palette cleanser... something clean to prepare us for the main event (also, something healthy...). It is nice to have a proper side of greens with meals... some countries miss this part... which will start to disagree with you after a few days of eating out.

The main event... On the left is the mixed Paella, with seafood and chicken. Some nice cooked shellfish and some tricky to eat little "lobsters" (I can't remember the proper name for the little guys)... the meat was nice and jusicy, but it was encased in some serious armour!

... and on the right, the dish that we all wanted to try out. The Squid Ink paella.... essentially a very similar dish, but with the Squid Ink cooked into it... it lent the dish a very different and hard to describe taste. It's quite nice... but in the end I preferred the regular Paella dish.

Both dishes were a touch on the salty side for me... and although I did enjoy the Squid Ink variant... it was a touch too strange for a whole meal for me.. so I stayed a little bit more to the regular one!

Now, to round out the meal (and to get in the right mind for the upcoming concert...) a coffee was in order. One of my colleagues suggested that we try this unusual variation on coffee...

Essentially, it is a regular espresso shot to be mixed with sugar and poured into a glass with an ice cube! So, a sweet and cold coffee shot for the hot weather!

I had never tried it before... but wow, in the hot weather... it is PERFECT!

It is something that I will have to try to introduce to my wife.. but I already know that she isn't fond of sweet or cold coffees... so it might be a tough sell, but in the hot weather, it might just work!

The staff were quick and friendly... the English was a little lacking... but we are in a small town in Spain, so that was to be expected. However, we managed to communicate using out mix of terrible Spanish and English... and lots of gesturing and pointing.

The food was really very good... and the price was decent. The paella was a touch on the salty side of things for me... but that said, it was delicious. So, no complaints on that front... but I'm not sure that I would eat it night after night!

The single tapas dish that we got was really very good... I could really imagine that this would be a great place to just sit and drink and eat the afternoon away on a lazy summer day!

... and lastly the coffee... WOW! I'm gonig to be back here if I ever find myself in the area!

Hey @bengy, here is a bit BEER for you. Enjoy it!

Thank you for entering our <Your weekly choice > Contest . Thanks to @bengy, Tasteem has become a more attractive guide. We upvote your post, wish you the best of luck in winning our Contest!

Thanks, glad you liked it!

All the food looks amazing - so much to see in Spain - my late step mom lived there and her letters to me were so entertaining - full of life and colour.

Yes, these countries are full of a vibrant colour that is quite unique... the food is a real highlight... you can get really great food quite cheaply in Spain!

I would love to visit one day

At first looking at the food I was like "well, it looks pretty okay", and when the main dish comes up I only know how to scream "wow" in my brain...really that looks really good. Must have tasted equally well!

And the coffee...yes, that indeed sounds like the best way to enjoy it in such heat...although it does sound weird even to me...

The coffee... is pretty amazing, you have to give it a go on a hot day!

Our country is heavily influenced by Spain due to the 300 years of colonization. I loved the review and hope one day I could visit Spain too. Food looks amazing!

Ah... you must have some nice fusion of cooking styles!

as usual love the detailed post. Love to try the squid ink paella cos we have had normal ones before but squid ink will be an interesting one to have.

Big thanks for the support and curation (a little less thanks for stomping me in steem-monsters!). Squid in is really unusual... I found it a bit too rich for me, a few mouthfuls was nice, but more... Too much!

Haha it was funny not long after I put in the curation I saw you in game ....

It's nice to eat out occasionally... although, I do get sick of it after a while... the food is always a little richer, saltier and oilier that I would ordinarily cook... and my stomach starts to rebel!

Your post was upvoted by @steem-ua, new Steem dApp, using UserAuthority for algorithmic post curation!
Your UA account score is currently 4.680 which ranks you at #1696 across all Steem accounts.
Your rank has not changed in the last three days.

In our last Algorithmic Curation Round, consisting of 103 contributions, your post is ranked at #13.

I love paella, it's one of my favorite dishes, I've never tasted it with squid ink, I really don't like the color very much what we say!! that salad looked great!

The colour is pretty weird... but it does lend a pretty unique taste to the dish... however, a touch rich for me!

All dishes are very appetizing.
Thanks for sharing

Thanks... glad they looked enticing!