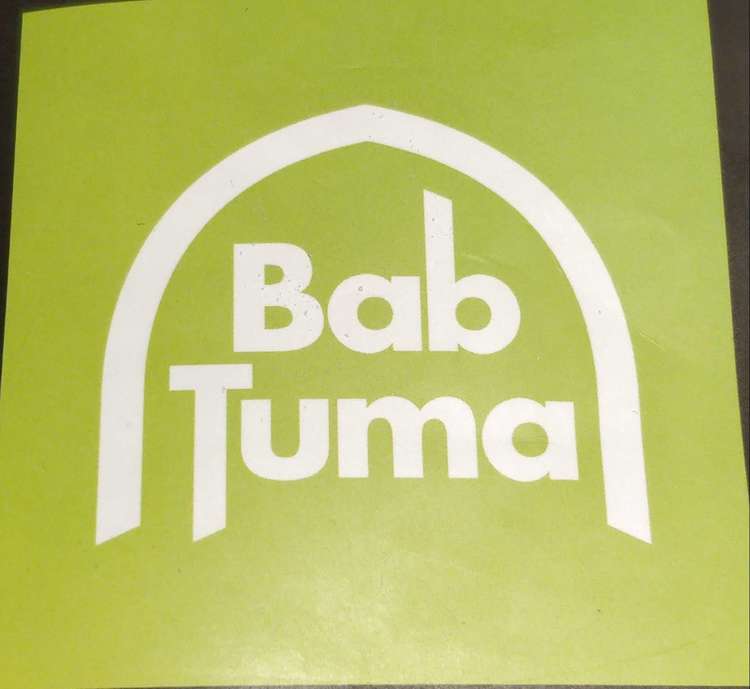 In Rotterdam, there was a newish (well, quite a few years ago now...) Market Hall opened up with a huge selection of places to eat at and also various food shops and delis. It is actually quite a nice place to visit as it isn't too far by train from where we live.... and there is always something nice to try out!

However, it often means that we end up here for lunch... and so we've been going around trying out the various different places that are in this Hall! Some expensive, some not so much... Bab Tuma is one of the latter!

From the front side, it is a bit more akin to a fast food sort of stall of the American variety. Bab Tuma serves up mostly Middle Eastern fare of the quicker variety... so wraps and that sort of thing, thus the easy to read displays and wide service area.

However, for those who just need a bit of a break... or are travelling around with kids... there is a very limited space of tables and chairs at the back side of the stall. Keep in mind that there are bar stool places on the side of the stall... which might be more useful if you are just with adults. With little kids, those are more of a falling trap!

From the back side of the stall, you are seated pretty much next to the kitchen area. From here, you can also order and pick up your food... so no need to keep running around to the front!

It was strange that for some of the dishes (Felafel was the one that I saw).. they were just using packets of prepared food that you can easily buy from the supermarket. Probably this is a common occurence for some food places... but when you have an open to the public restauarant, it is probably better to do that package opening somewhere out of sight and at least pretend to be not using off the shelf supermarket goods...

Like I had mentioned before, most of the food on offer is of the faster Middle Eastern variety... however, you can also get some rice dishes and meat dishes if you so desire. Not the sort of eating whilst you are walking type of food... but I really love the Middle Eastern rice dishes... I'm not sure what they do to flavour the rice, but I LOVE IT!

There are also some of the less commonly seen dishes like soups and that sort of thing... I wasn't too keen to try them out on this particular day. We did have the kids with us, so we had to stick to things that we would think that they would eat... and the parents would be the vacuum cleaners afterwards.

Haha... so when I said that we would have to order for the kids... I lied a little bit, I still always like to order something that I think I would prefer to eat! So, spiced meatballs and rice for me!. The meatballs were pretty decent, juicy and tasty... not the best that I've had of this variety, but adequate. Same for the rice... The chips were so so... not really crunchy enough for my taste.. and the salad was woeful.

This pizza-like dish with a sort of meat based paste was a great hit with the girls... they loved it, it was a touch greasy for me... I did like it, but I knew that if I ate too much of it, I would start to feel a little queasy. However, if your stomach can handle that sort of thing.. this is a great choice! Just skip the salad...

... and finally, a grilled wrap with chicken inside. This is the sort of doner chicken that you get at all the fast food takeaways, you know... the one on the stick that is rotating? I love this stuff.. but I always skip the sauces... the garlic sauce that they have here in The Netherlands is just horrifically bad!

Compared to the other places to eat at this Market Hall, this is one of the quicker and cheaper options. Unfortunately, the quality of food isn't that great either... In the past few years, I've made a couple of trips to Turkey and we have some pretty great Middle Eastern restaurants near us in Den Haag... this just doesn't stack up. Perhaps if I never had had those other experiences, then I wouldn't have known any better...

However, after seeing them use supermarket pre-made felefals.... well, that was a huge turn off. Is this place worth it? Nope, I would try something else next time.

alliedforces
You got some love from a member of @thealliance family!
Keep up the great work!
The #spreadlovenotwar curation campaign is under the guidance of witnesses @enginewitty and @untersatz.
07.11.2019 10:26
0
#

Thank you for entering our <Cheap and Fabulous? Totally possible!> Contest . Thanks to @bengy, Tasteem has become a more attractive guide. We upvote your post, wish you the best of luck in winning our Contest!

Yes I have been there with Soyrosa was so lekker. I need to go and do some tasteem reviews

There are lots of nice places to eat in that Market Hall... this wasn't my favourite though...

I think their opening packets of grocery store items as the things they are "cooking" for people shows they must not even value their own business very much. Ordinarily an owner would think, "If some customers see this they won't ever come back!" These guys are saying, "Ah, so what - we don't care one way or the other."

Yeah... it was pretty ordinary behavior... maybe there was an explanation... but I've been to places where they make the Felafal mix... and it is so much better!

Thanks for the support and curation!