Muziekgebouw (Amsterdam, NETHERLANDS): Behind the Scenes 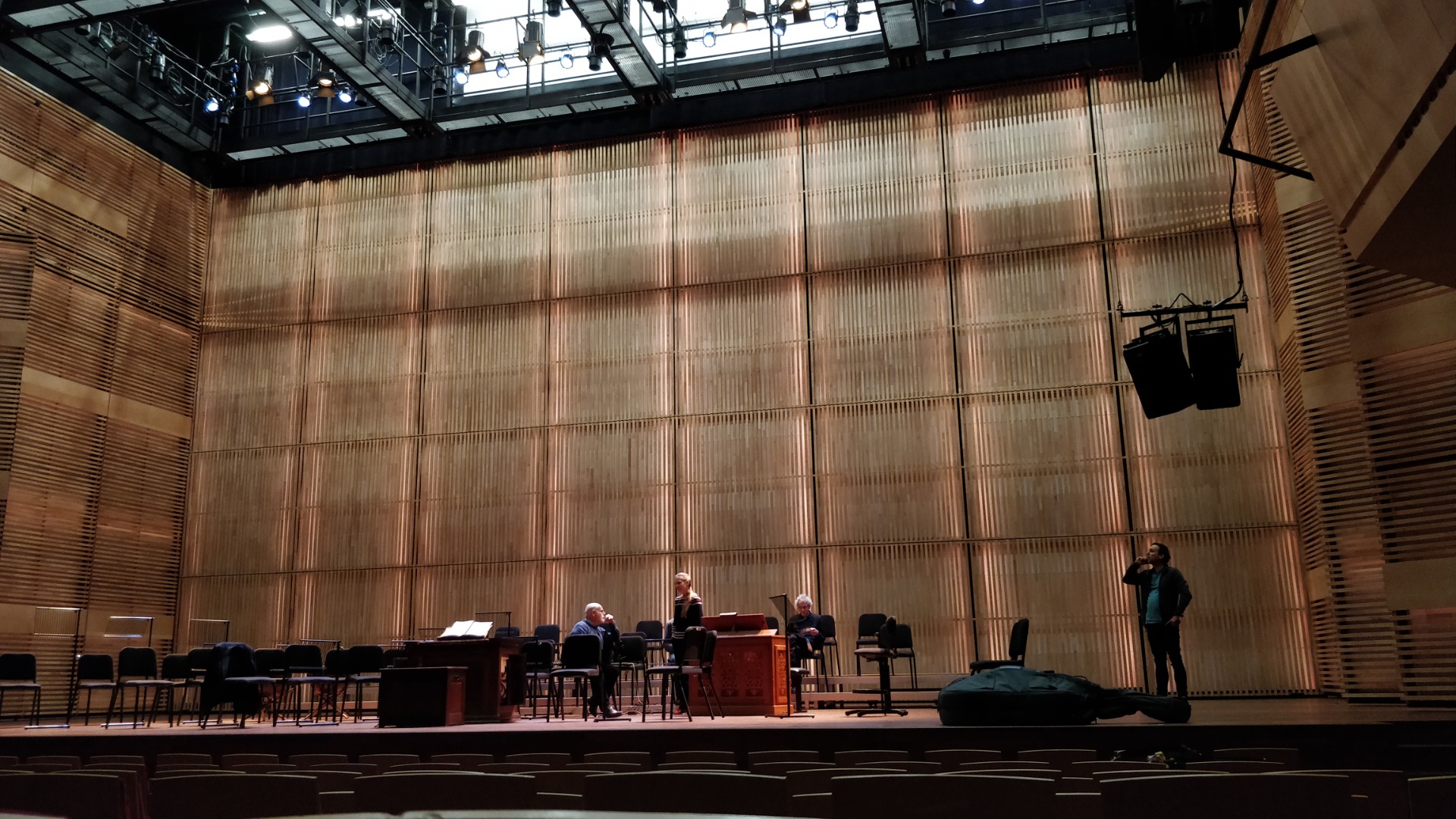 The Muziekgebouw is one of the two big venues for Classical Music in Amsterdam. Unlike it's more famed cousin (The Concertgebouw), the Muziekgebouw has a smaller concert hall with a less iconic stage setting... and is much newer with a less fabled history. However, it is a perfect size for a Baroque orchestra or other chamber sized ensembles which makes it a great experience for musicians to play in.

As you can see, the stage is the only part of the Muziekgebouw that the audience experiences aside from the refreshment and ticketing areas in the lobby of the concert hall. However, as a musician, you have a different entrance and completely different experience of the building behind the stage and the public facade. 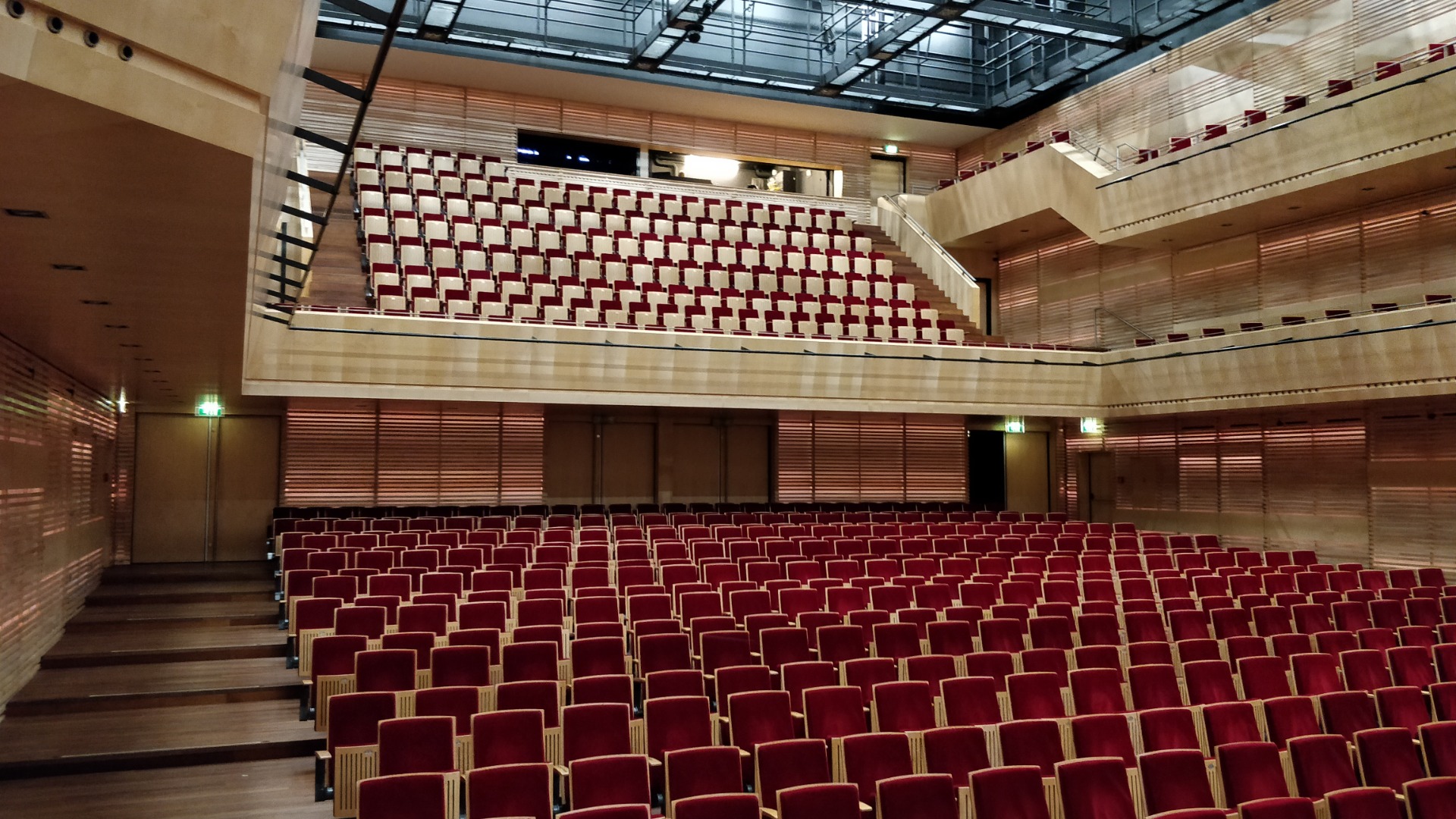 In the case of the Muziekgebouw, it is all constructed of a lovely wooden shell, which helps with the acoustic vibrancy of the concert hall. The red colours of the seating contrast nicely with the light wood lacquer. You will also notice that some thought has gone in the wing seating, in that they are all facing the stage (meaning that there are also fewer seats...)... this is quite important, as other concert halls have these wing seats facing inwards, which means that the audience have to turn their heads to face the stage... which gets quite painful after an hour or so! 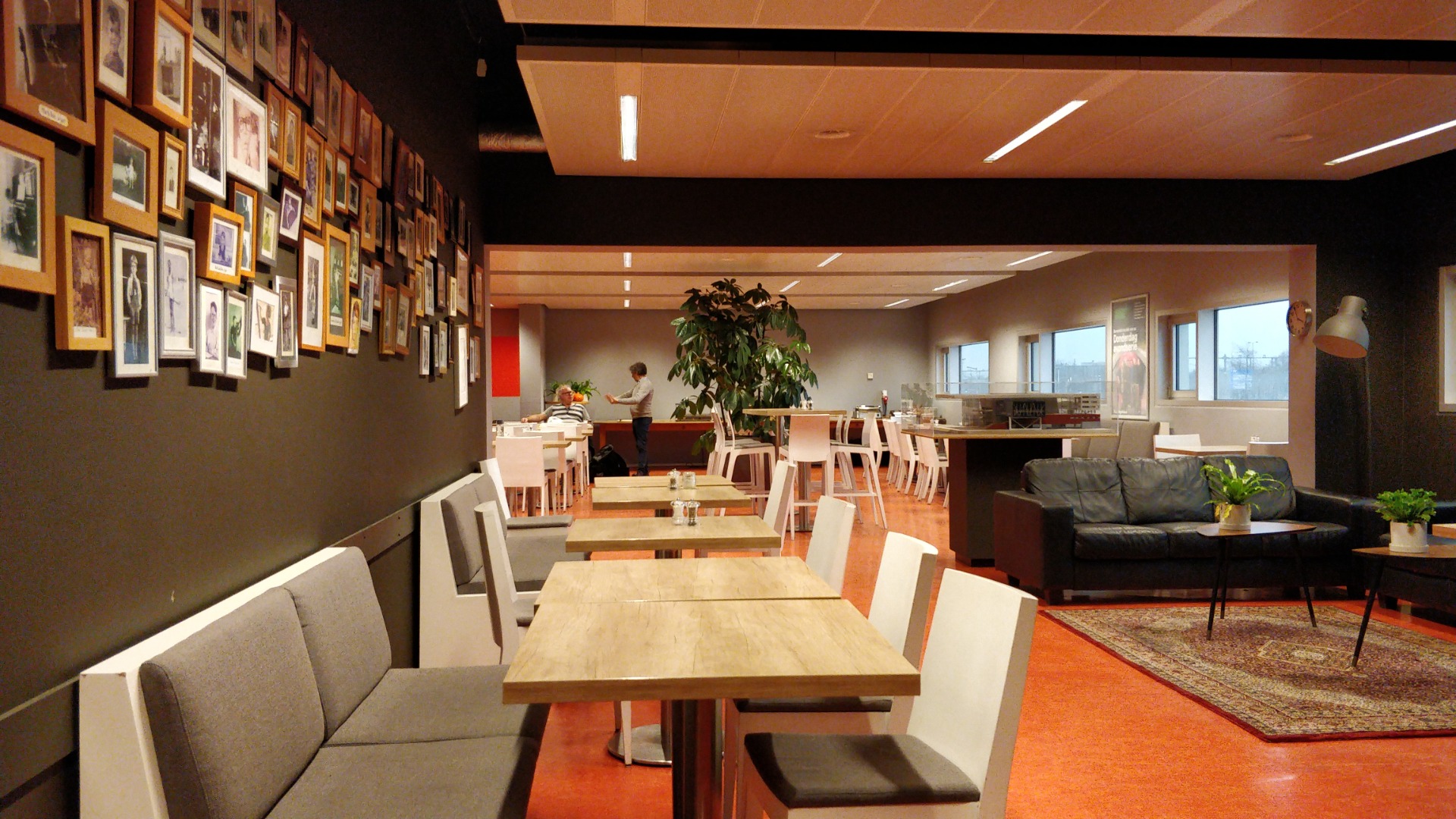 This is the Green Room, where the musicians can relax in relative comfort before the concert. Generally, you will find musicians eating, socialising, sleeping or in my case... gaming! This is the place to kill time, between the seating calls of the late afternoon, and the actual going upon stage. Sometimes, that time can be an hour.. or up to three or so hours! 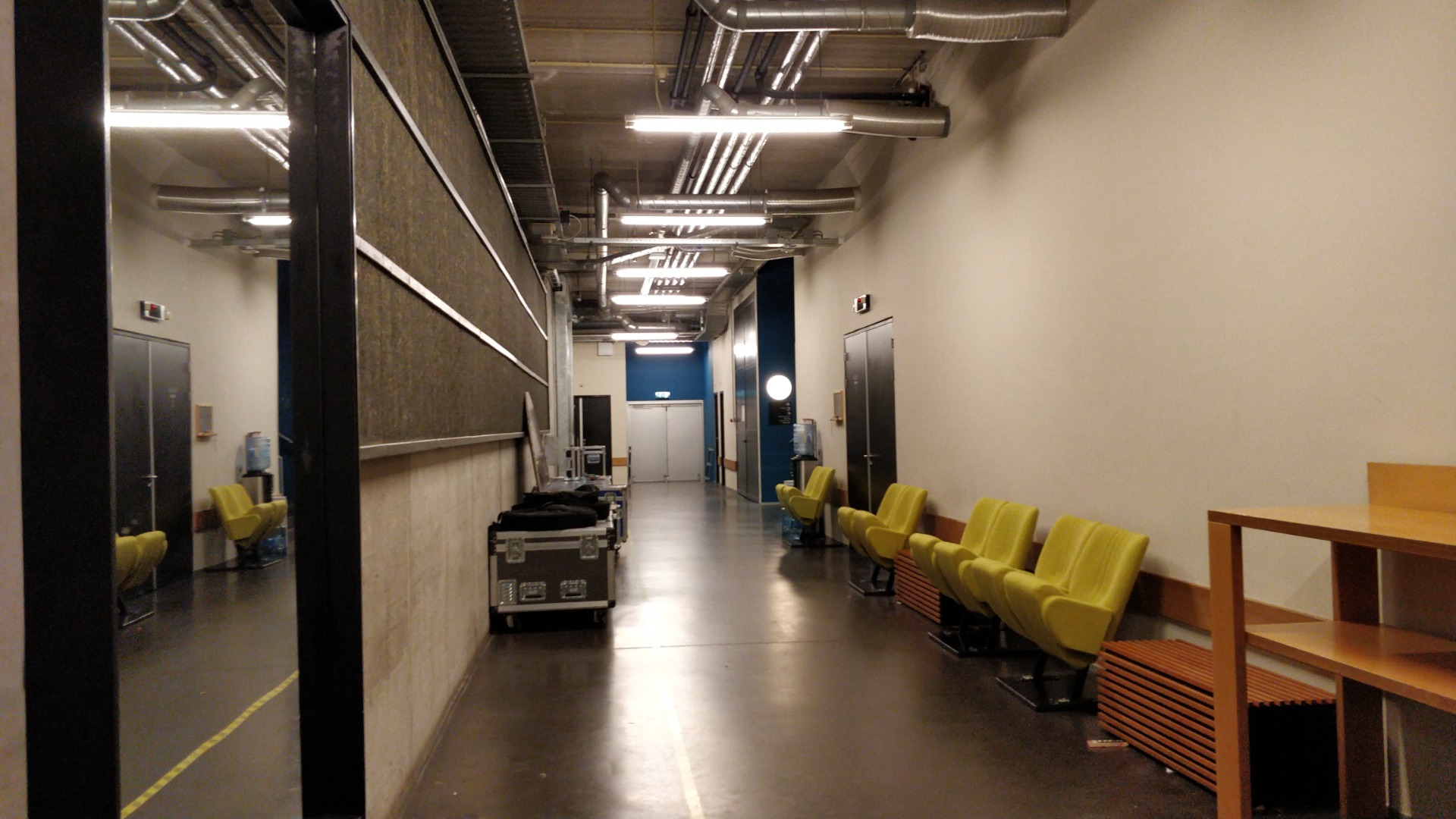 Coming down into the area behind the concert hall walls, you have an access area with some rudimentary furniture. This is the area directly behind the concert hall, and often plays host to various on stage props and large instruments (contrabasses and stuff like that). It is also the area that has direct access to the loading docks for trucks and that sort of thing.

Before a concert, you will find musicians milling around here... unpacking their instruments from cases, and leaving the cases scattered along the walls here! 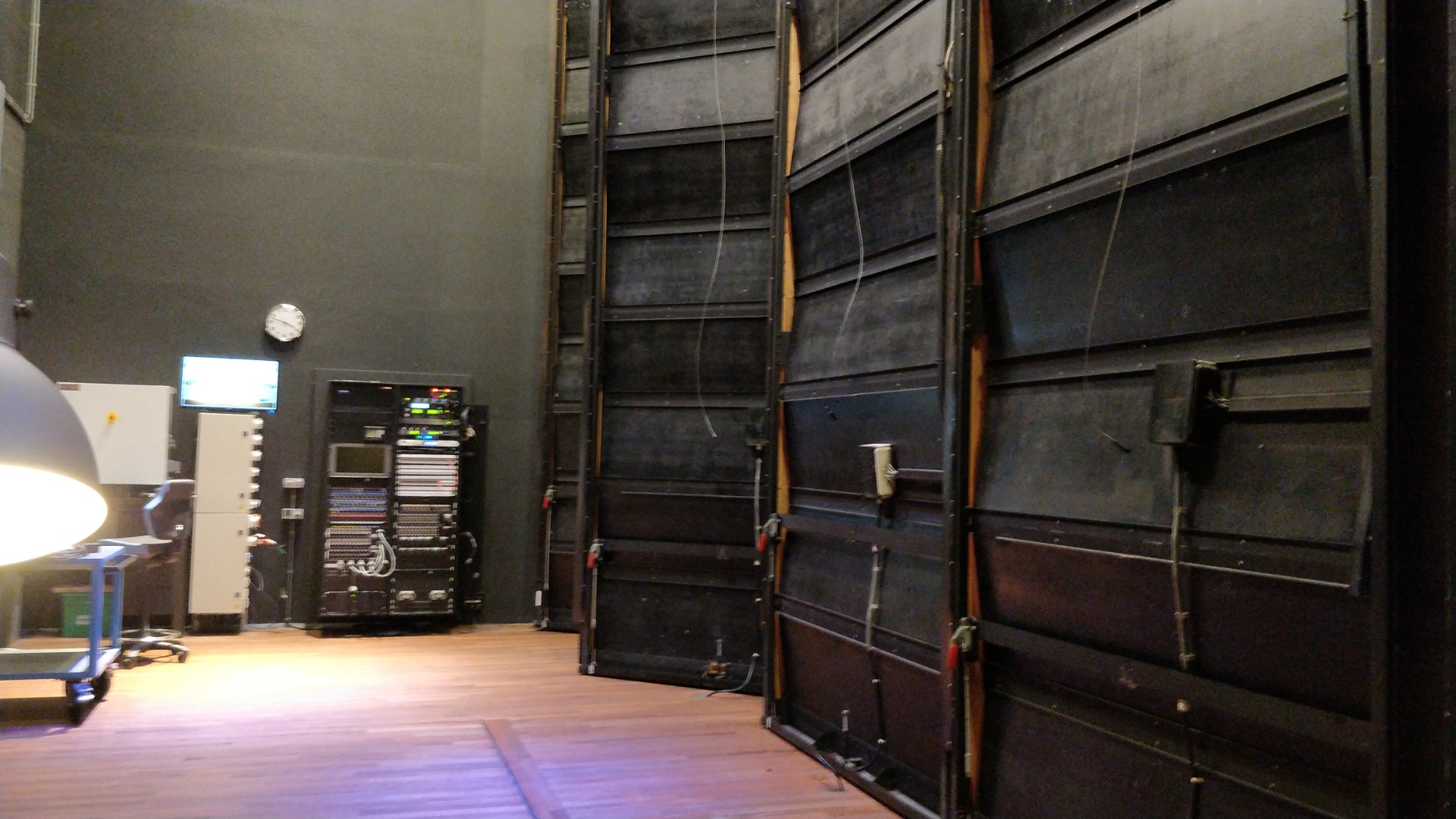 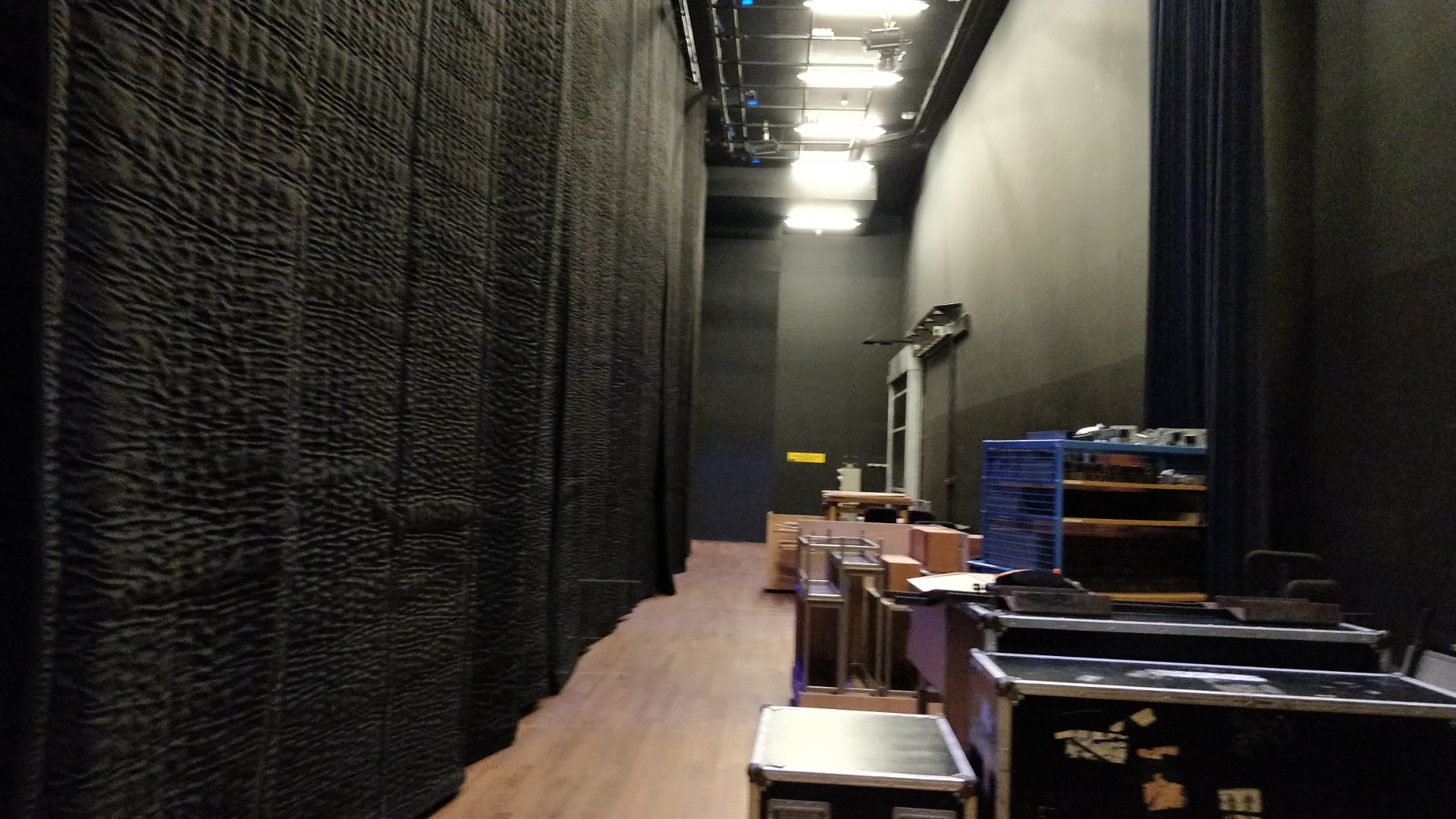 Going directly through the sound-proof doors of the concert hall wall leads us to the area behind the acoustic shell of the stage. This area is now live to the audience, meaning that any sounds here will be heard on stage and by the audience. So, in this area, it is mostly forbidden to start practicing or talking loudly.

It is also the final gathering point for musicians who are about to go upon stage. Normally, during the concert, the area is very dimly lit in reddish light to prevent any extra light leaking onto stage. However, when I took these photos, it was in the break time just after a rehearsal, and so there was no need to prevent light leakage!

You will notice that this is also the area where all the electronic controls for the stage manager and crew is housed. They have CCTV through to the concert hall and the front of house, timers, light controls and stage controls. It also serves as the point of co-ordination between the front of house and the back-stage crew.... who rely the "go" orders to the musicians who are gathered waiting for the word!

So, there you go... the view that the audience has of a concert hall is quite different (and slightly more glamourous) than the "work" environment backstage... however, I wouldn't change places for anything! I love hiding in the dim red light... waiting for that moment step out into the bright light!

View this post on TravelFeed for the best experience.
concerttravelmusicclassical-musicamsterdamtheallianceteamaustraliaalldutchenglishpalnetneoxianmarliansbloglifestyle

Congratulations @bengy! You received the biggest smile and some love from TravelFeed! Keep up the amazing blog. 😍 Your post was also chosen as top pick of the day and is now featured on the TravelFeed.io front page.

It has been a beautiful blog post.Thank you so much for sharing your experience.

My pleasure, glad you enjoyed it!

Even behind the scenes its beautiful, i tagged you this morning in an introduction hope you dont mind

No problem! It is always nice to see new string players!