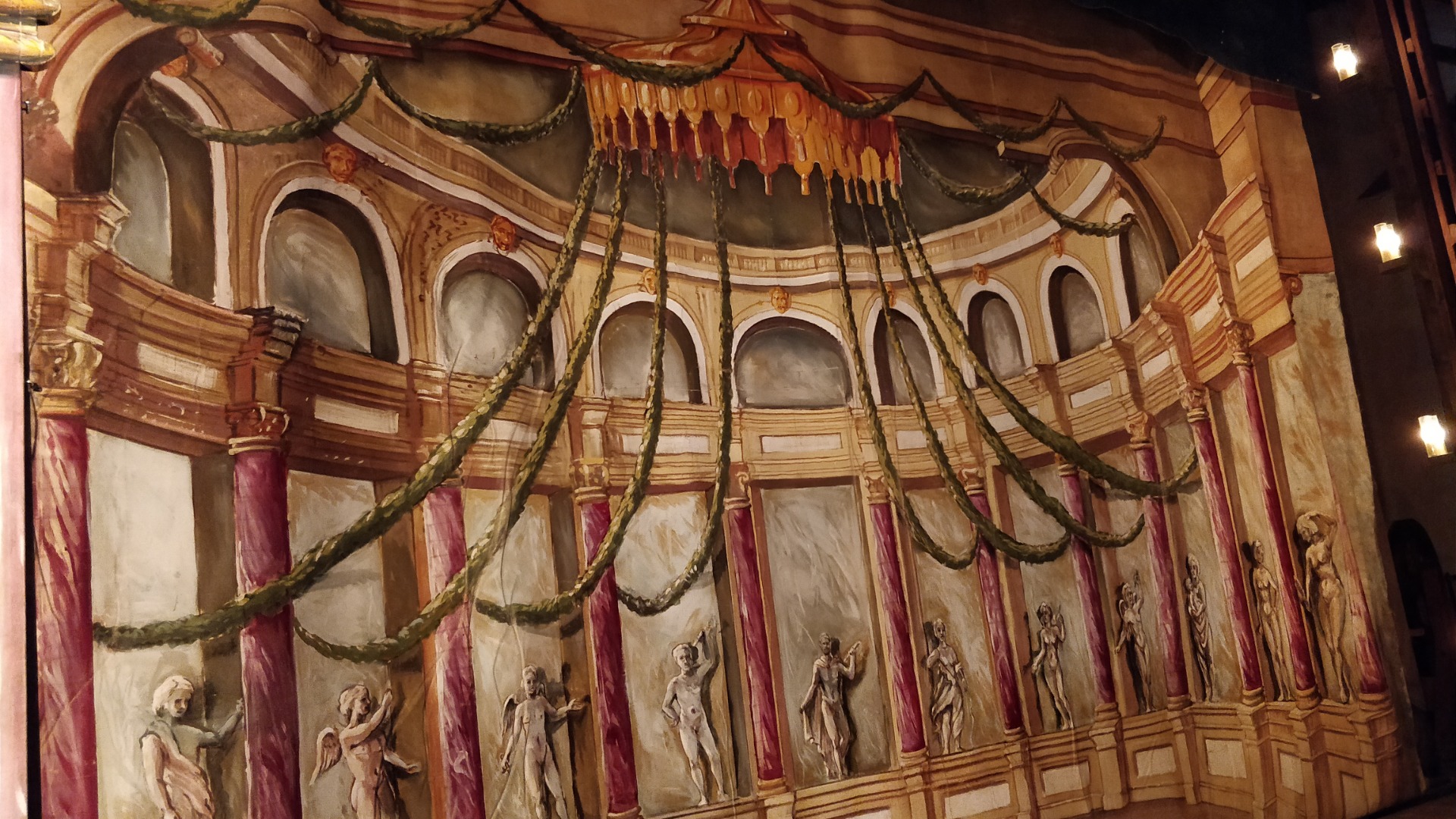 The Ekhof-Theater is a Baroque style theatre which is housed in a wing of the Schloss Friedenstein in Gotha (GERMANY). The Schloss (castle) itself is particular interesting building which houses many interesting museum artifacts from the local area, however, for musicians, the Theatre is the crown jewel of the building... which is why I've broken this particular part of the Schloss Friedenstein experience out from the rest of the collection and building (I will post more about the rest of the collection in a later post).

The theatre was first opened and revealed to the public in the late 17th century (1683) and it has the oldest surviving (and working) examples of original wooden stage machinery from the Baroque era! The equipment is now meticulously maintained and lovely cared for... but it is still in use, despite the impressive age of the apparatus. The photo above shows a hand-painted backdrop for a recent opera performance.

Part of the reason that there are such few examples of original Baroque theatres is the fact that the theatres tend to be a deadly combination of wood and paper/textile backdrops... which in the past, combined very badly with candlelit performances and rehearsals! (Wars also didn't help....).

You can see the bottom seating area being for the regular "people", whilst there is a VIP box upstairs for the more important (more equal?) members of society. Very little has changed in the intervening centuries... there are still some people who just more important than others and will need to exhibit that fact to the lower classes! 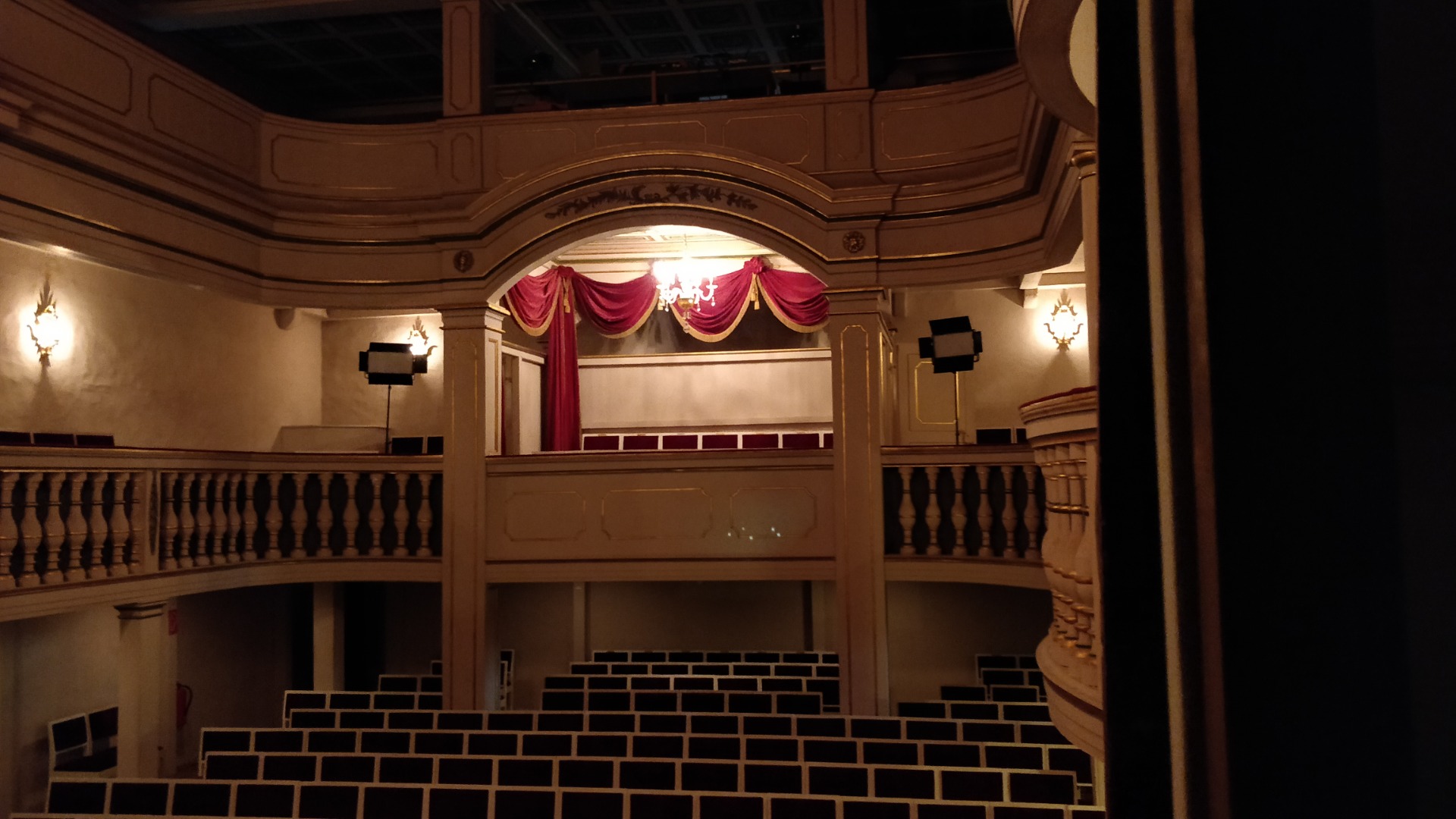 This is the view of the audience from the stage.... it is a very small theatre, which I would argue is better suited acoustically for speech rather than music. However, there are examples and historical records of compositions by Benda being performed in this little theatre, however, it appears that those were more speech declamation (not singing) which was accompanied with music (think a bit like the silent films that had a piano backing... sort of... but with speaking!). 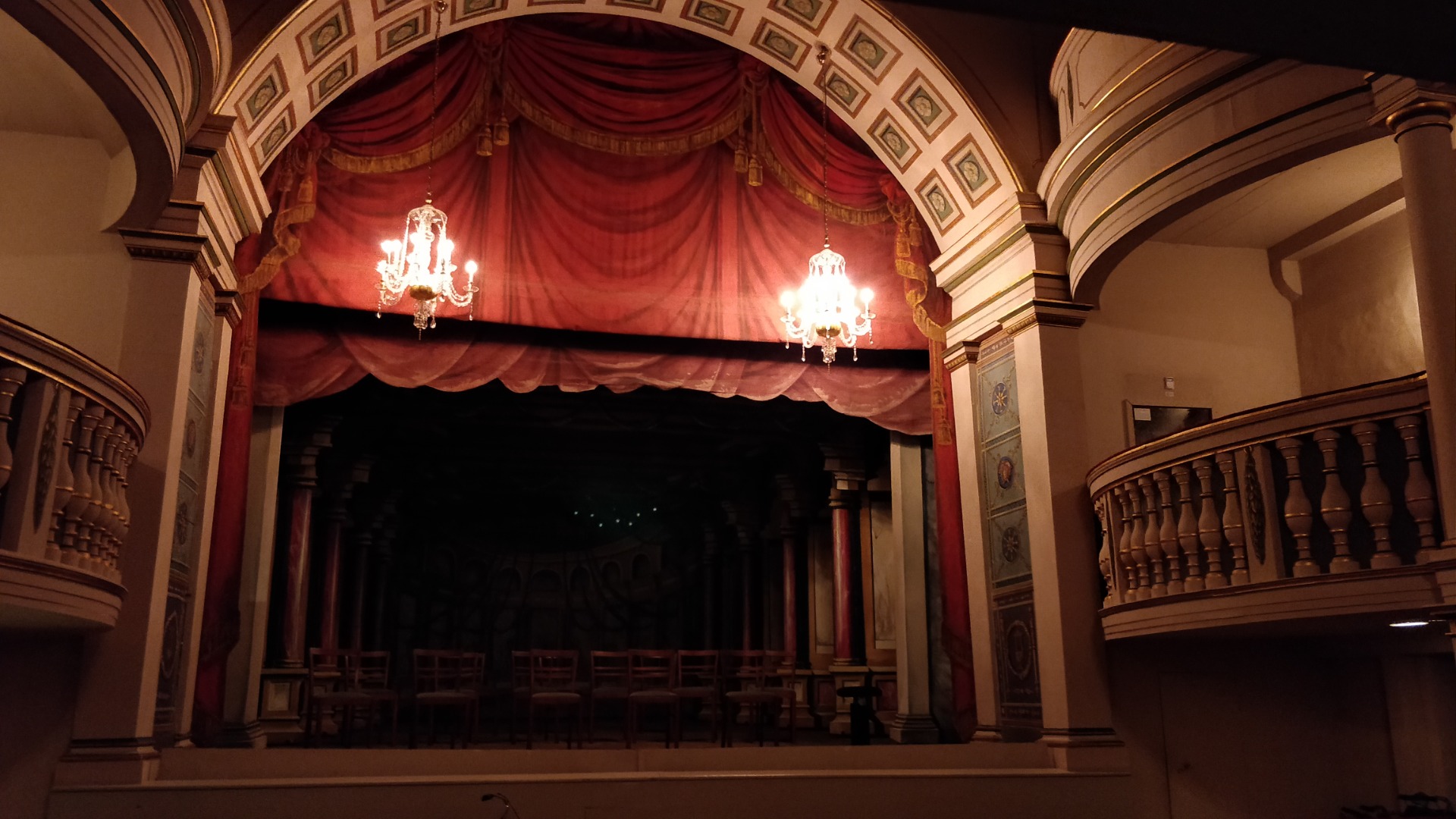 This is the view of the stage from the audience side... what you can't quite see here is the small orchestral pit in front of the stage (very small... making for very cramped playing conditions... but that was the way that things used to be!). Also, the stage is raked... meaning that it slopes downwards quite heavily... to be able to give a better perspective of the onstage action to the audience, and possibly giving a sense of increased depth to the stage (the stage is really quite small from a modern perspective!). 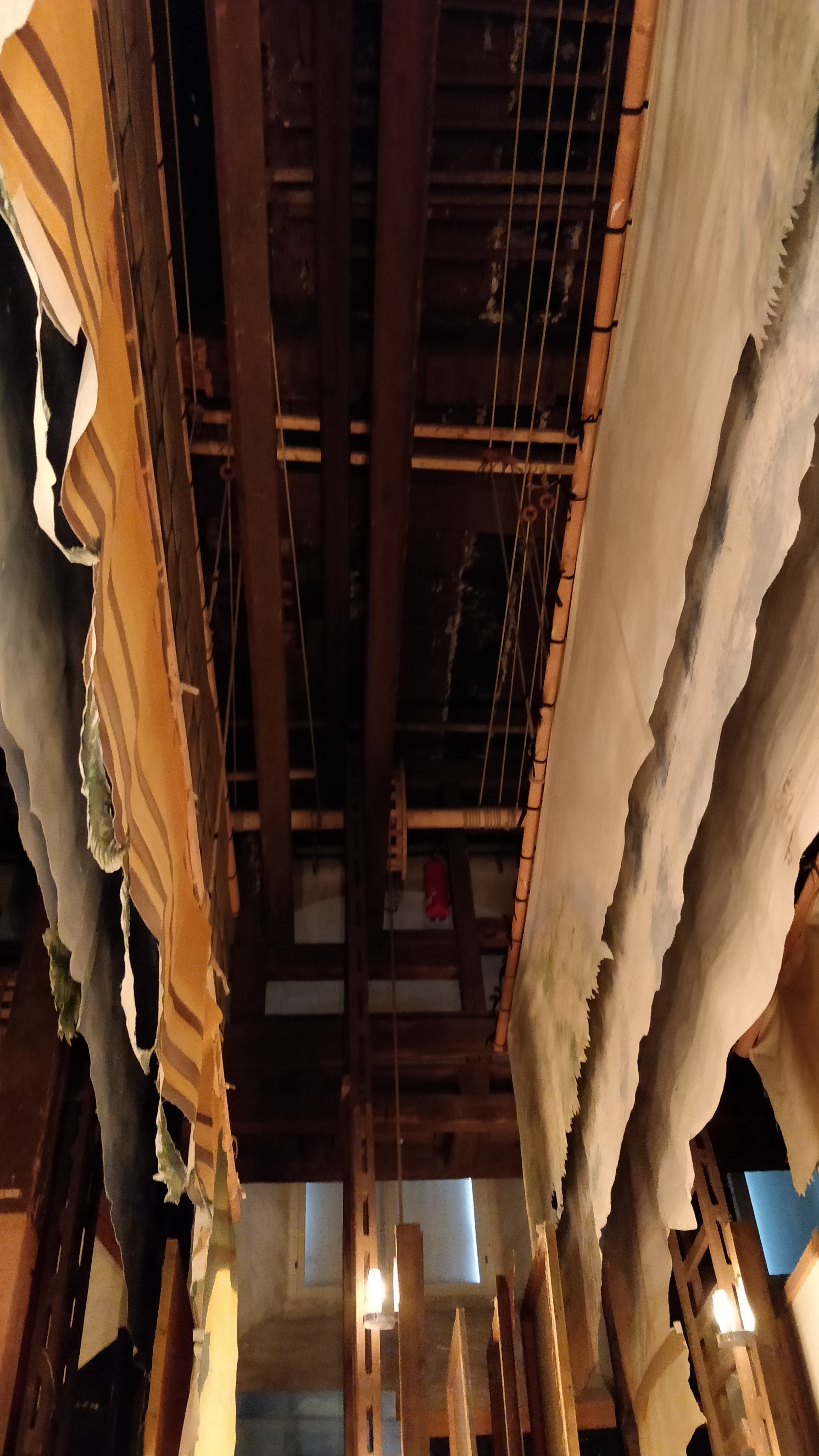 Here you can see the various pieces of backdrop machinery that still uses the old rope and pulley systems to pull the various parts into place. You can see that the oiled canvas or paper backdrops are really quite an enormous fire hazard, but thankfully, in the modern age we don't have to also juggle handling open and naked flames in the form of candles for lighting!

There were quite severe limitations on the number of different scenes that could be rolled out, I think that the maximum was three. There were several eaves which from the audience perspective would look like a seamless scene, but it would allow performers to come into and out of the scene from between the backdrop panes. These different panes at varying distances to the audience would also create the illusion of depth and distance for the audience. 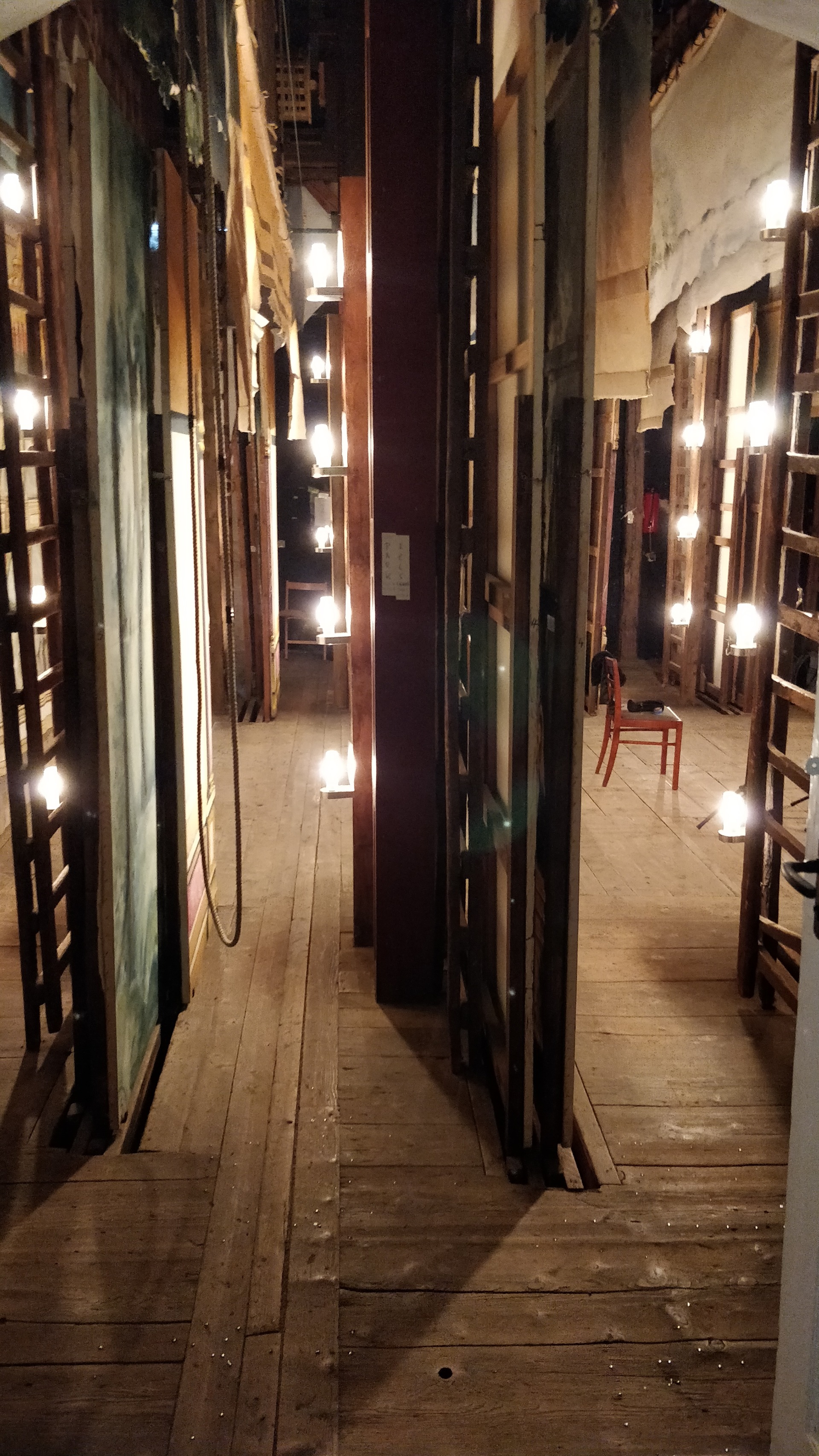 The last shot is of the stage itself... it isn't something that is readily obvious from this photo, but the severe raking (slope) of the stage combined with the uneven nature of the wooden floor made for quite a treacherous stage to play upon... thankfully, as a musician, I don't need to walk around the stage very much... but I could see that for spoken word actors, a little bit of extra concentration would be required to navigate the stage whilst avoiding a very public splat on the ground!

View this post on TravelFeed for the best experience.
germanymusictravelclassical-musicgothateamaustraliathealliancelifestyletraveladviceculturetheaterblogmarlianspalnetneoxian

Congratulations @bengy! You received the biggest smile and some love from TravelFeed! Keep up the amazing blog. 😍 Your post was also chosen as top pick of the day and is now featured on the TravelFeed.io front page.