Building a bed for the little (with the older one!) Wow, I'm just going through my archive of photos that I had put aside for future posts... and I came across this series of photos from about a year ago when my older daughter and I put together the rest of the bunk bed for her little sister.

Before this build, the little one slept in the bottom area of the "hoogslaper" in a little cot that she had when she since she was a baby. This is the area that kids can have a desk or resting area whilst the bed is on stilts up above. 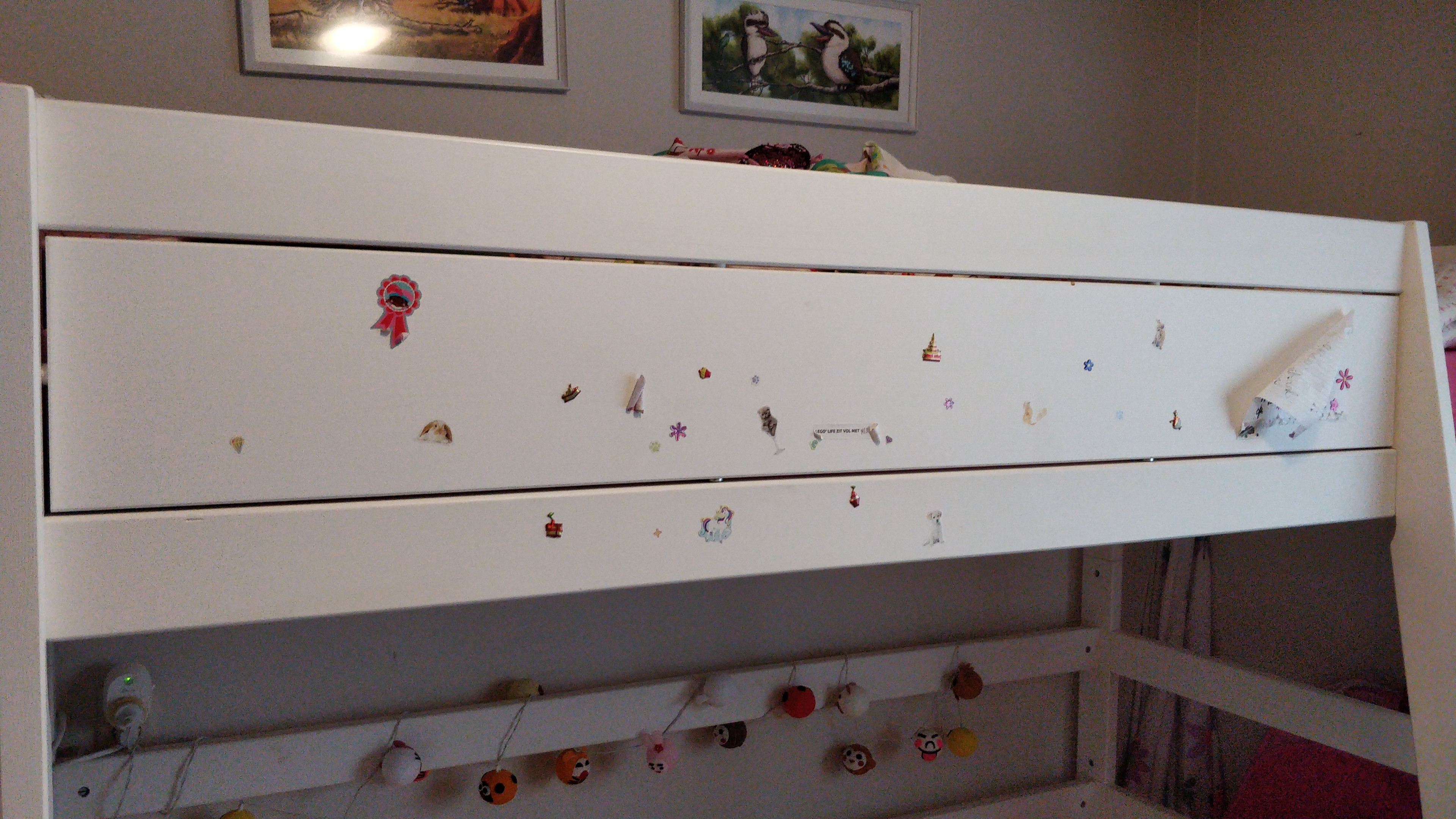 The bed make is pretty good quality (Lifetime brand) and I've seen many kids have this style of bed well until their late teens! Actually, I even seen adults have this sort of bed when they live in an apartment with limited space as well. As we already had a good chunk of the required frame from when the bed was at a ground height... there were only a handful of little bits and pieces that we needed to order. Of course, the bed store doesn't stock them on hand... so they had to order it, which did take a number of weeks... during which time the little one was asking when her bed would arrive. First things first... the matress would have to come off the hoge-slaper section. Just in case we needed to move the frame around whilst building the bottom section. It is quite surprising how hard it is to get a mattress off a high perch! These things are pretty damn heavy! Thankfully, we weren't too careful and just lifted it over the safety bar and let it slide and drop the almost two metres down to the floor. I'm not strong enough to stand on the ladder and hold it properly at a distance away from my body! 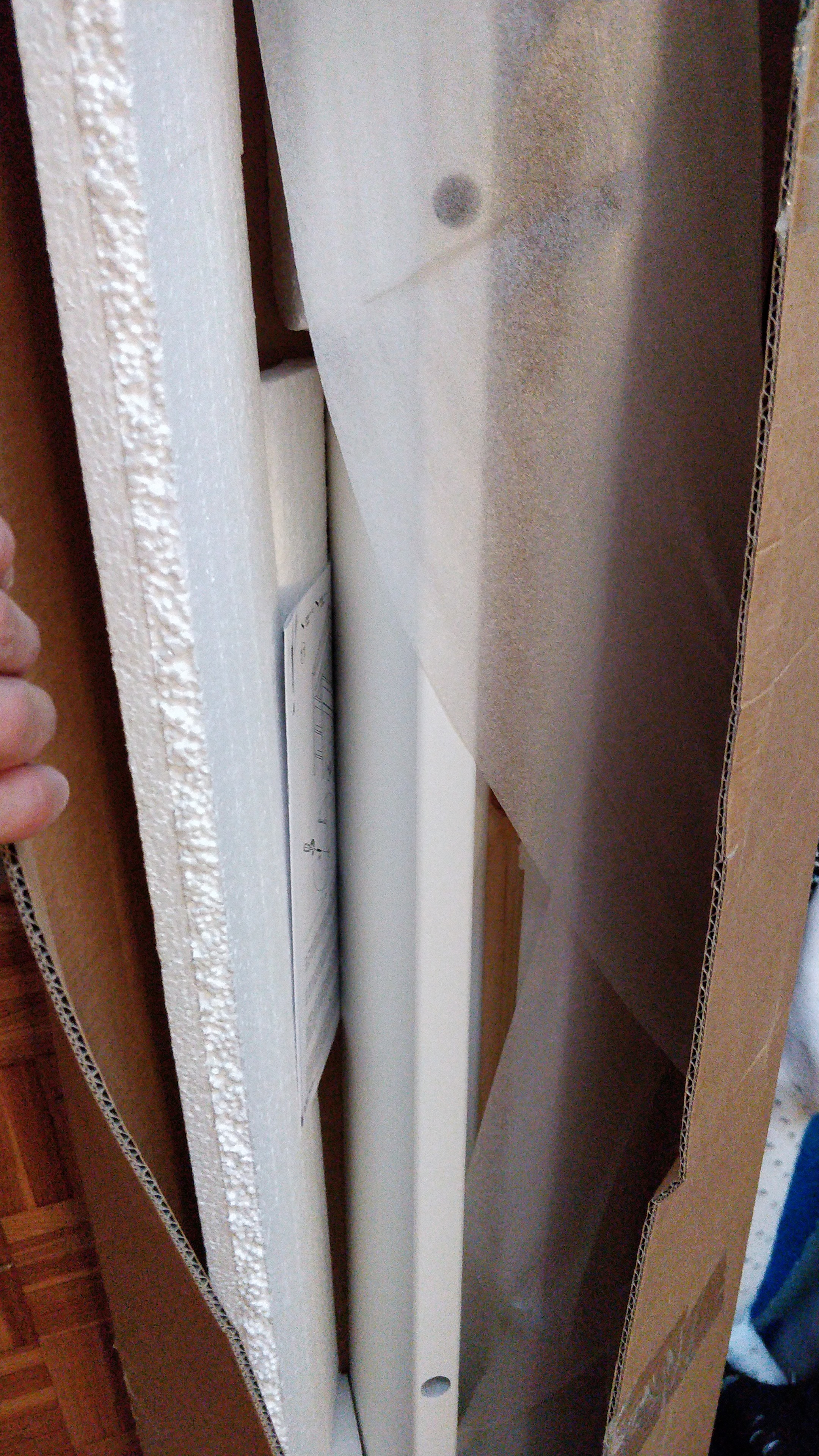 ... the elusive manual! It's always a bit of a guess where this is going to be found in all the flat packed boxes. I would personally put it with the tools and screws... but apparently, it is better to stock it elsewhere! Ah yes... the famous flat-pack, assemble it yourself manuals that were made famous by the IKEA interpretative drawings. Thankfully, these ones are much more detailed and easy to follow. With clear distinctions between otherwise similar looking objects! I always like to take out and have a look at all the bits and bobs that come in the tools part of the flat-pack. Lots of screws and various bits that look superficially similar... but when you are nearly finished, you discover that some of them are slightly longer or thinner! I always like to put them in a location that is clear from the rest of the stuff so that we don't end up chasing things across the floor... and then when I need stuff, I take only what I need and put them in my pocket. So, nothing is ever as easy as snapping in one section and snapping out another. Part of the legs from the hoge-slaper section would need to be replaced with another section that connected the side bars of the lower section. Sigh... that would also mean removing the safety side of the top section as it was all screwed in together! Plus, it would also mean lifting up the top section, removing the old bottom parts and dropping in the new top section. In my mind, I knew how it SHOULD work... ... but first things first, we would need to clear out the space so that we only had the bits that we needed in the room. So, all the boxes and extra sections would go into the toy room until we needed them. YOSHI!!!!!! Sigh... this was the moment my wife suggested that we should vacuum the floor while we had a chance! 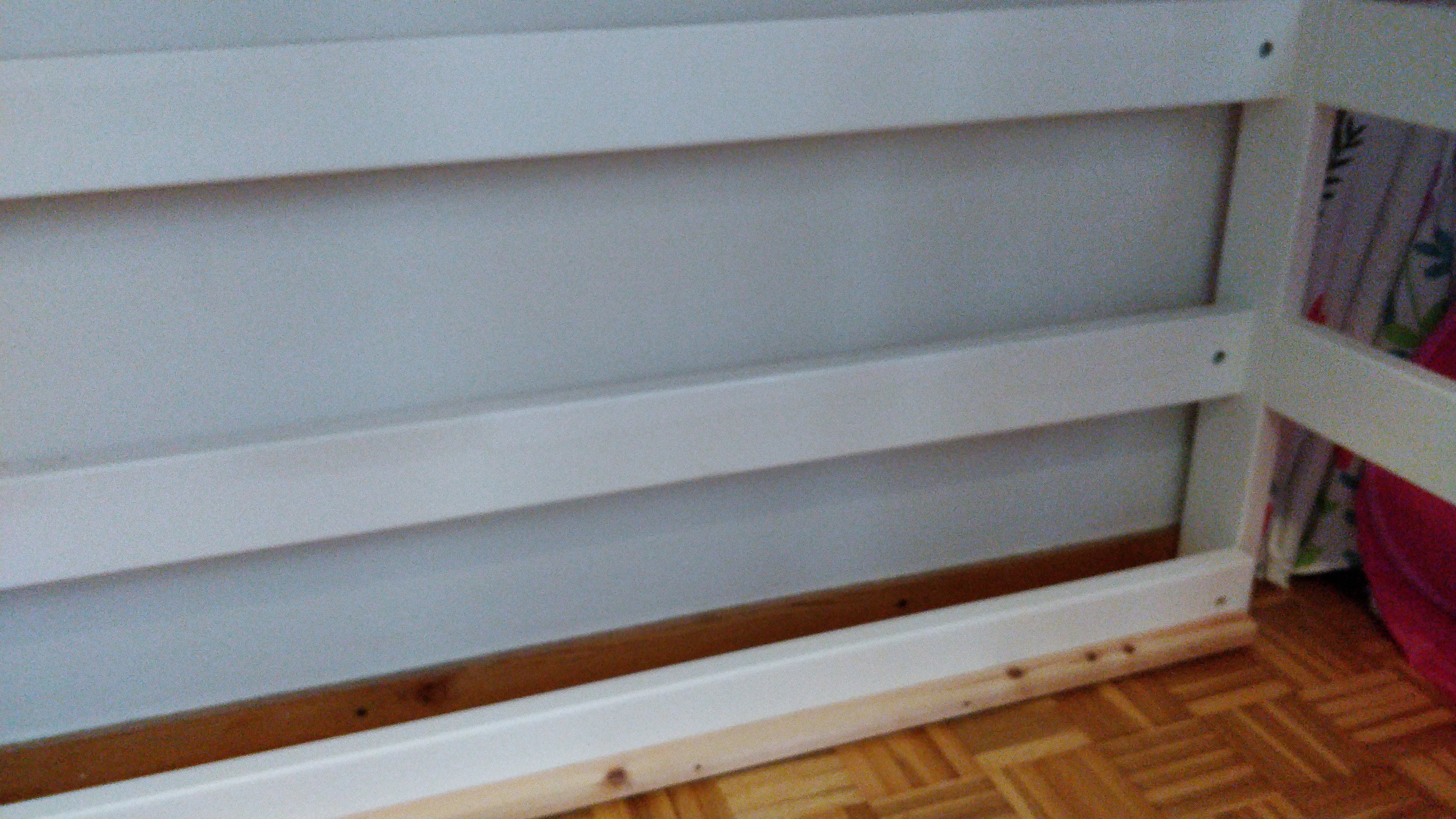 So, this is one of the side bars that would need to replace the lower side bar. The difference is that it has a extra rail to support the mattress slates. Easy enough... except it might be a pain to remove those side rails!... and my wife was convinced that the whole thing would collapse. I tried to explain that it was mechanically and physically impossible... but to no avail. So, we closed the door... 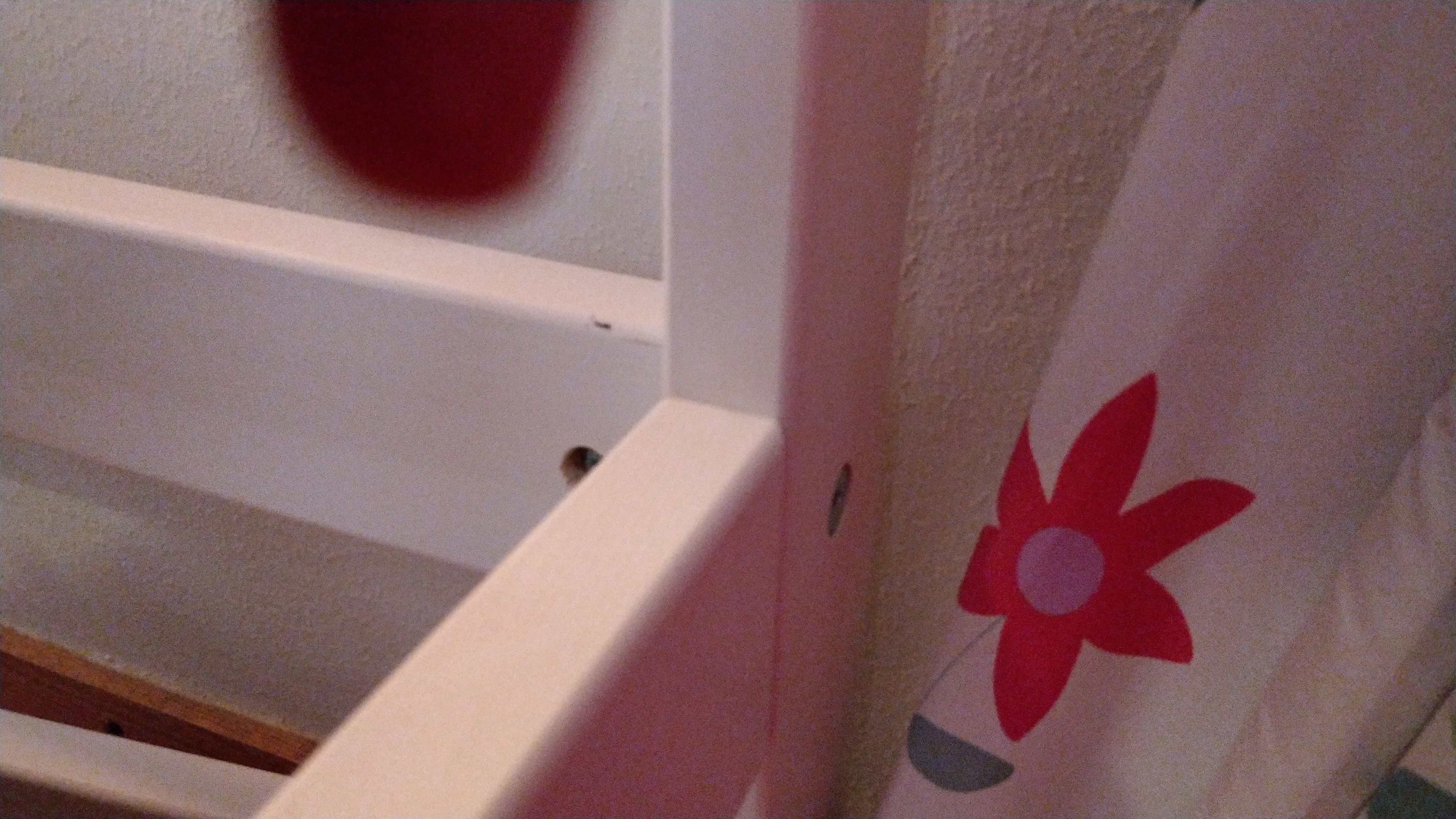 Phew... one side, there was just enough room to get a hooked Allen key in... just! However, it would mean that this would be a manual job... no fancy power tools! The other side was a tighter squeeze... so definitely no lazy way this time! 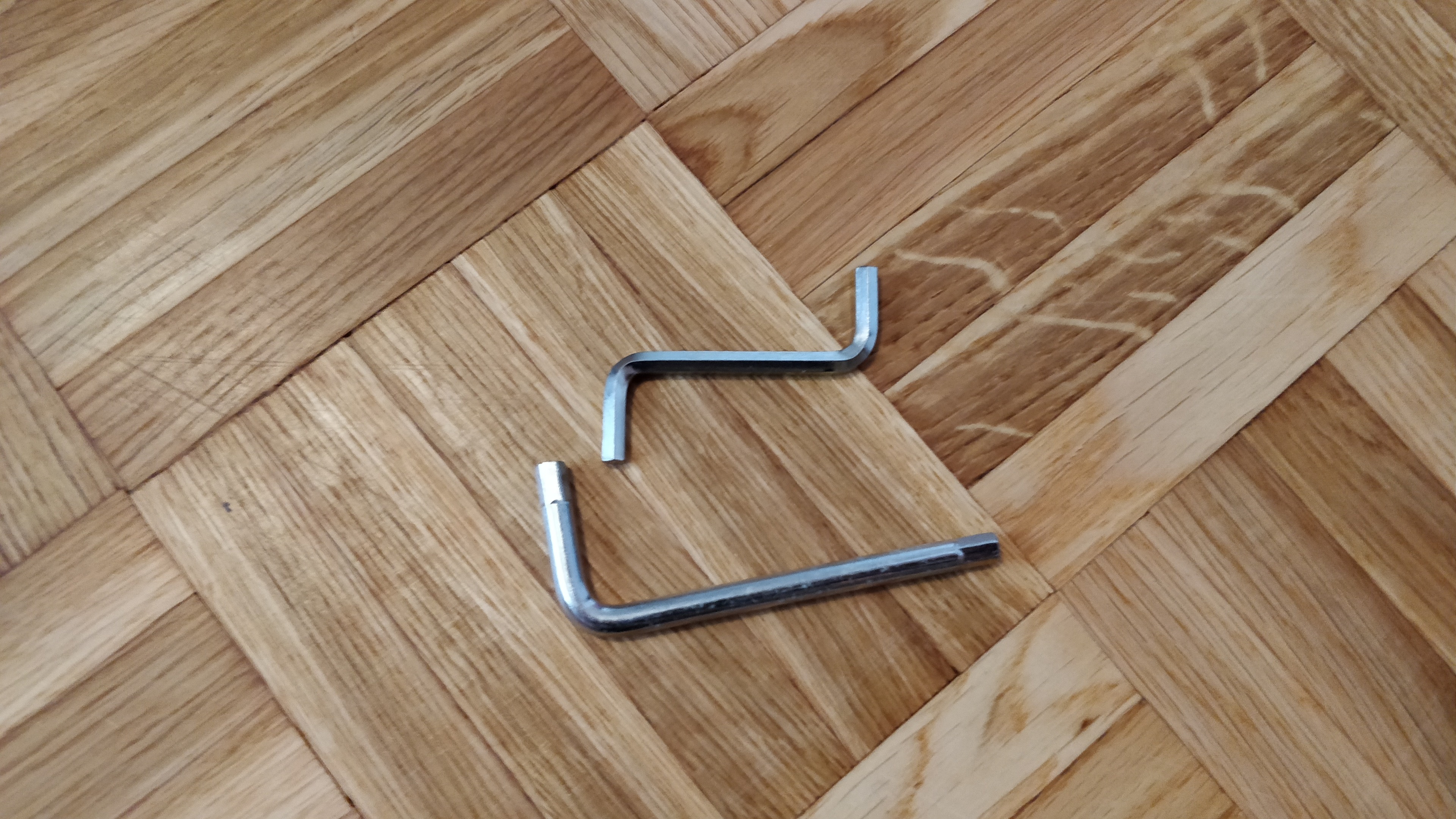 After many years of building IKEA and other flat-pack furniture with these tools... I can't tell you how much I hate the thought of using them! A couple of years ago, I had bought a DeWalt Screwdriver/Drill... let me tell you, it is worth every penny to have that little gadget! I was pretty sad that I couldn't use it this time around... well, not without moving the bed out. I didn't want to move the bed... For some strange reason, my old one LOVES putting in the dowling guides for the screws. All ready! Since she is older, I don't have to check too much to see if the dowling guides have gone into the right places. There was a time when she was much smaller where I would find them all over the place! In holes that were clearly the wrong size! My wife always thinks that it is a bad idea for me to let the girls use the power tools... but these are just screwdrivers... it's not like I'm giving them a chainsaw to use! Plus, it is nice for them to help put stuff together, especially for her sister... or if it is for herself! These days, it won't be uncommon for her to take my precision screwdrivers and fix her sister's toys! ... of course, someone has to hold everything in place as she still needs two hands on the screwdriver. I'm not doing this if she is hammering nails! Last stage was for the slats to be replaced on both the top and bottom sections of the beds. In the end, I didn't need to move the whole bed out... but I did need to lift up the top section with my wife whilst the girls guided the top section onto the guide screws that were sticking out of the lower section. Sadly, there are no photos from that part of the construction.... I was a touch busy trying not to squash one of the kids! 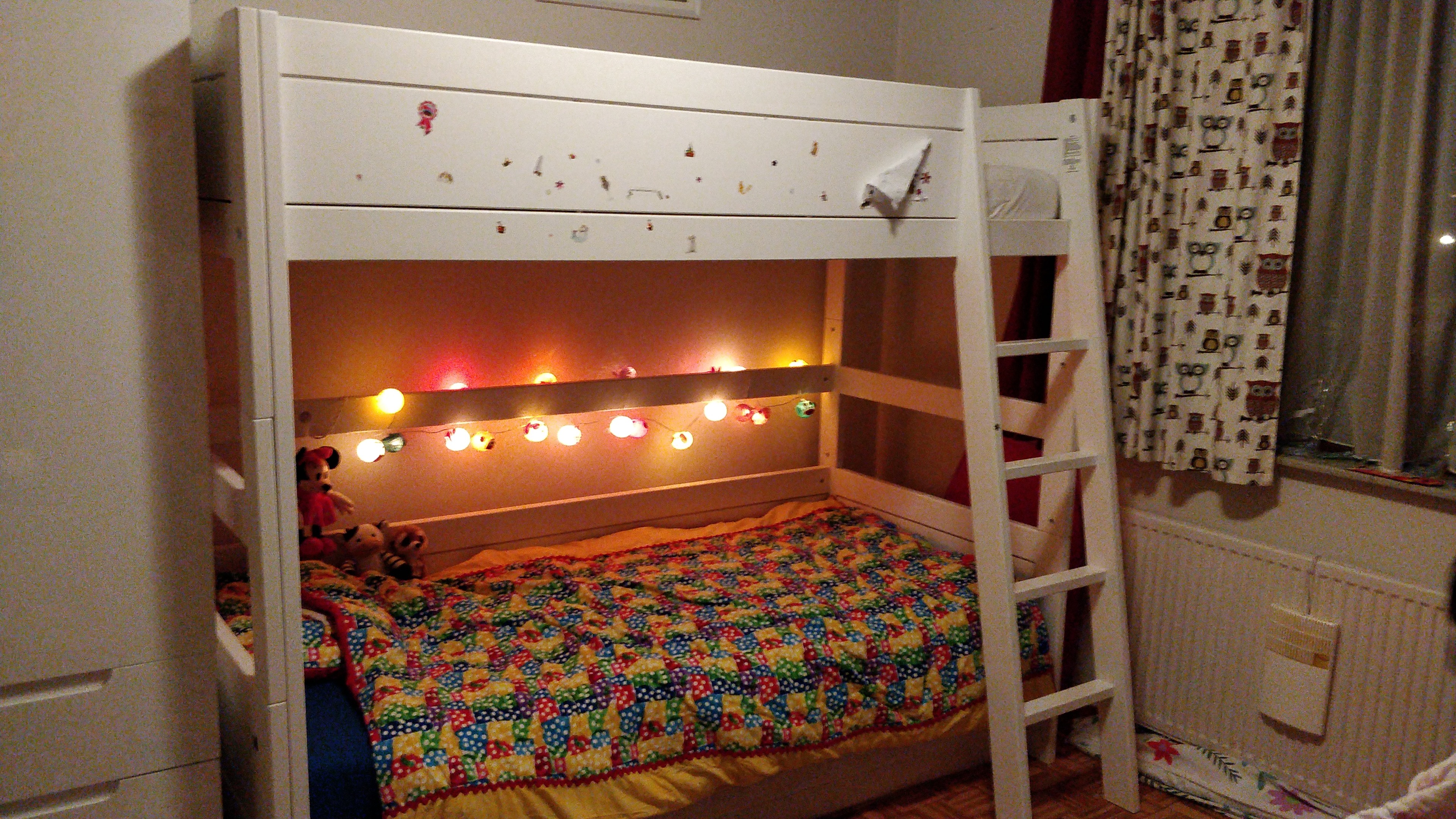 So... the finished product! A successful afternoon building! Now my little one has a real big bed where she can stack millions of soft toys and make a new start on a brand new snot wall!