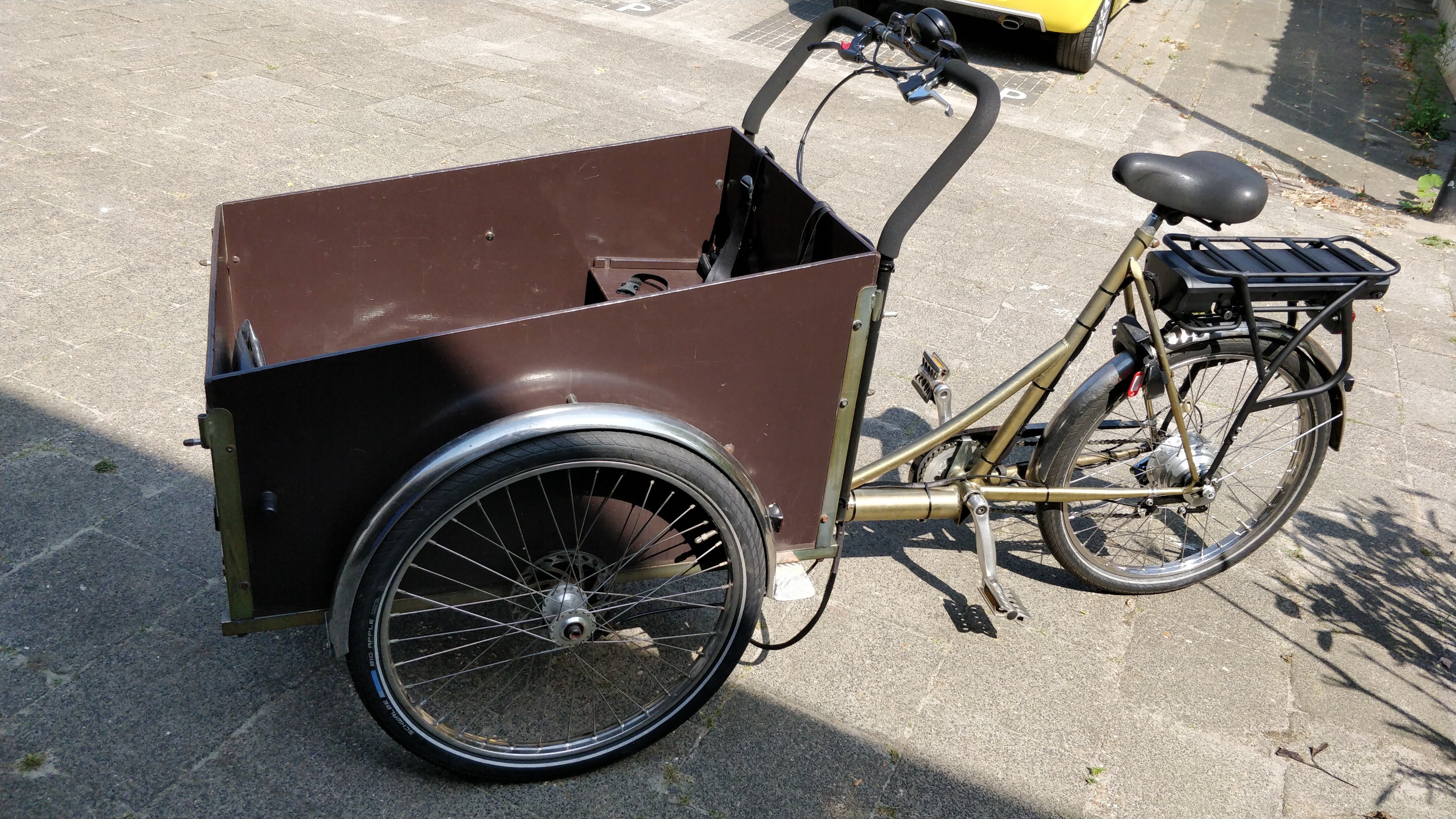 So, if you have been following my blog, you will know that I've been a little obssessed about converting our bakfiets (cargo-bike). It is part of our continuing drive to use the car much less than we currently do... we started first with purchasing a normal e-bike which has in just over half a year racked up nearly 2500km. That would be 2500 kilometres that weren't travelled with a car, which is a huge reduction in carbon (and other) emissions plus ends up much much much cheaper with electricity vs petrol costs.

However, that e-bike is a single adult transport only... and it means for picking up kids and delivering them to various after-school activities or shopping we would have had to use the car or the bakfiets. Sometimes I would use the bakfiets... but let me tell you, with two kids in the cargo section plus wind... a hour or two of riding this cargo-bike is a real killer! I would end up getting back home ready to keel over... despite the fact that dinner would need to be cooked! Not fun at all... so, despite the best of intentions, I would often fall back to taking the car instead.

However, this last weekend, our plans to retrofit the bakfiets was finally completed. The fietsenmaker finally settled on a build after some initial hiccups. We were originally planned to have a middle mounted motor (on the pedals) but when the engine arrived, it didn't fit against the crossbars of the frame! Luckily, the fietsenmaker was able to return the motor and we opted for a rear wheel motor instead. This involved the complete replacement of the rear wheel, but it was the only possible option left! 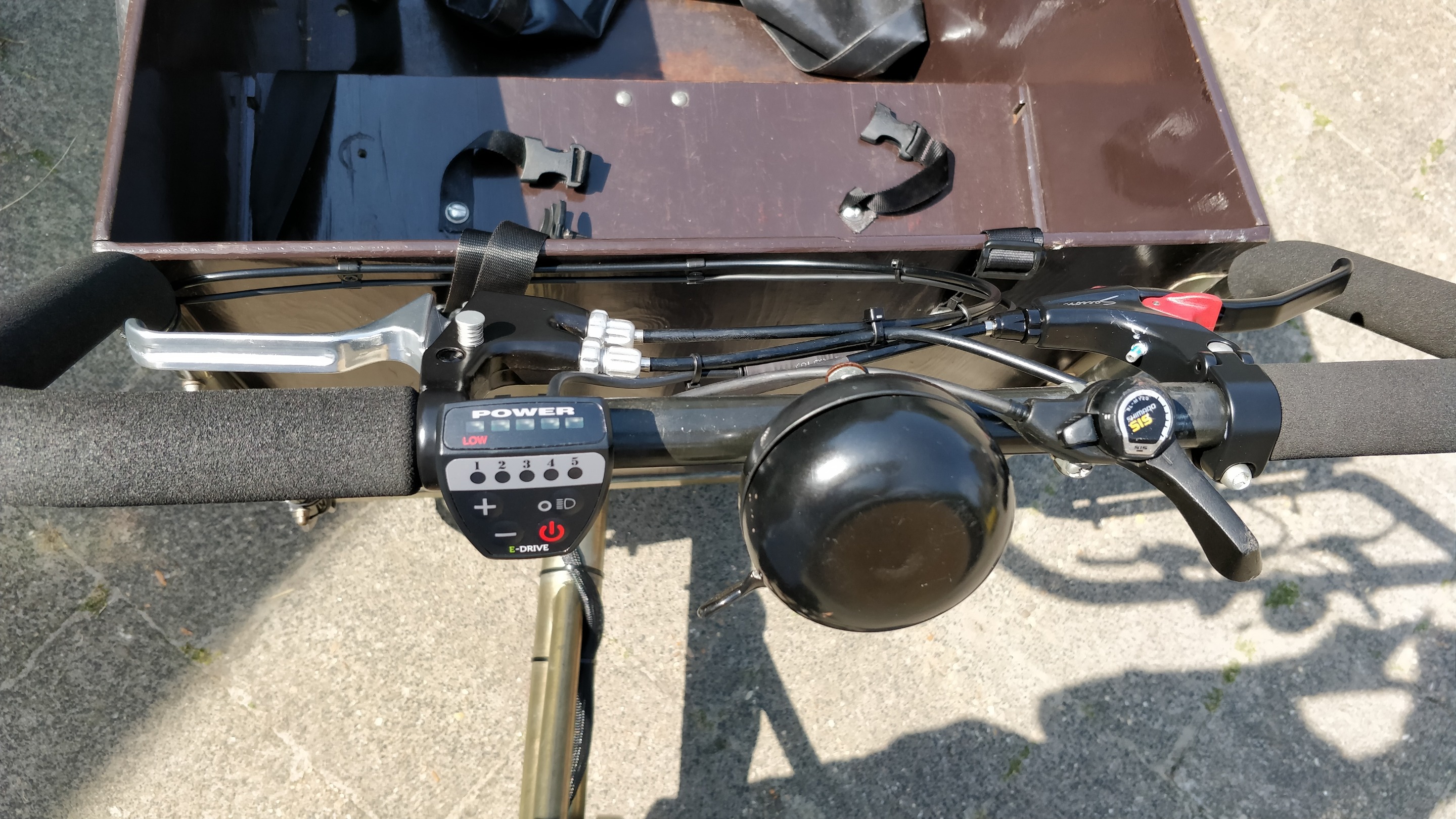 The controls sit nicely on the front in a tidy little cluster. The gear system was replaced along with the rear wheel for a nicer set of gears than what we had before.... and the foam covering around the steering bar was replaced with a less tatty and weathered set!

The engine controls sit to the left. I opted for a very basic display that shows only the engine settings and no additional information (like speed or anything like that...). It was the cheaper option, and from the e-bike I found that the extra information wasn't really much use anyway... at least not worth an extra 50 euros worth!

On the controls, there is a set of lights to show the battery level and also the current engine setting. The engine has 5 settings, and most of the time just the 1-2 boost setting is more than enough for this bike. On smooth and straight paths, I opened it up to the full 4-5 boost, and it is weird to be flying along on this cargo bike... however, with no shock absorption it makes for a bumpy ride. Plus, it is a bit dangerous as the rider is easily thrown by sudden bumps... so, best to keep it down! There is an electrical cable that runs from the steering bar to the engine/battery at the back. Unfortunately, due to the way that the front section turns, there needs to be quite a bit of give in the cable... and as a result it hangs uncomfortably low to the ground. I will be attaching some rollers to the bottom of the cargo section so that the cabling can be held close to the bike, whilst been free to move over the rollers. This will reduce the possibility of it getting snagged on something! 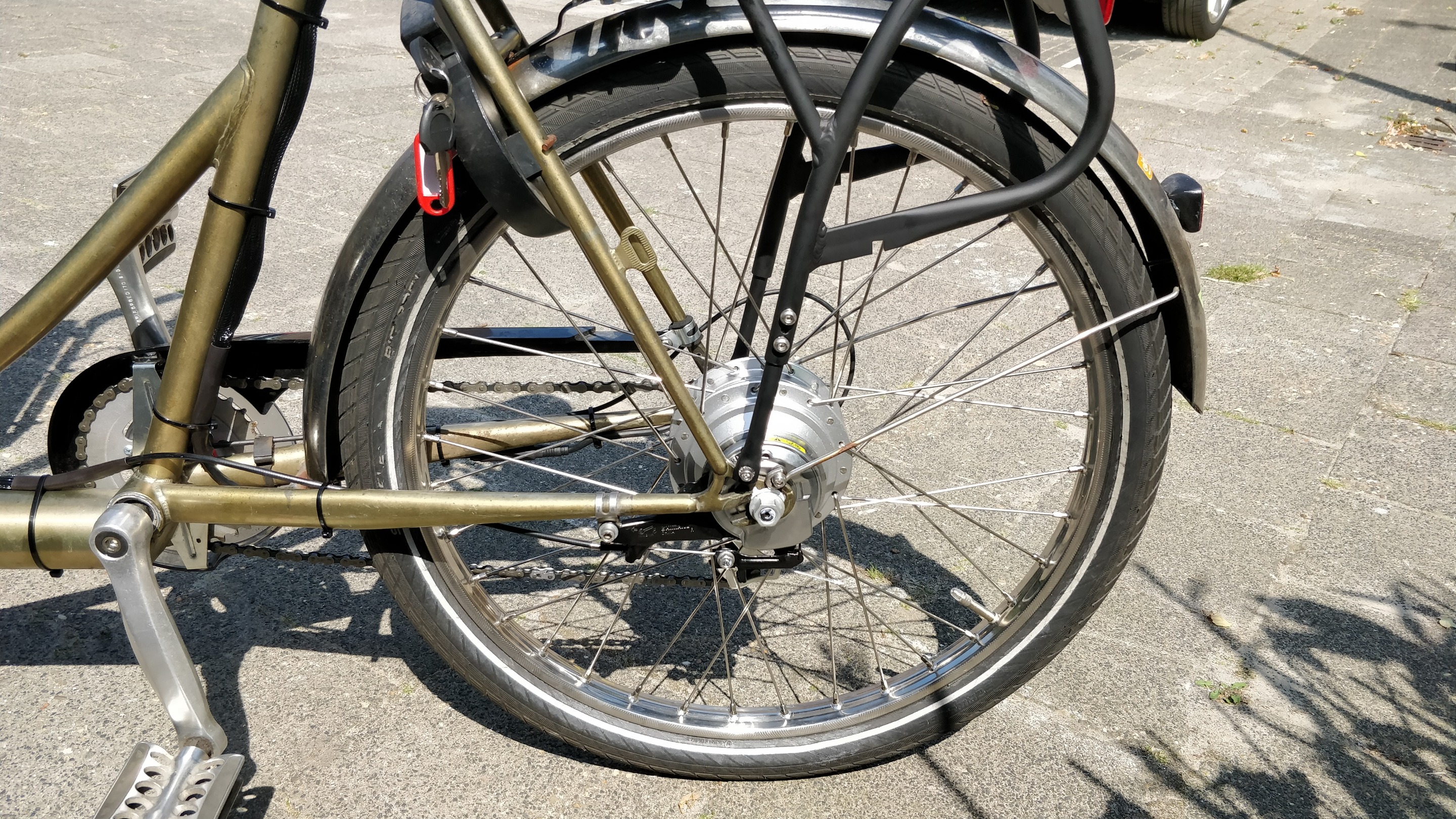 So, this is the motor assembly on the back wheel... it is a 250W motor (compared to the 750W motor on our e-bike) which is the legal maximum for a cargo bike. Being rear mounted, you have a much more natural feeling experience when the motor kicks in with assistance. With the front mounted motors (which are cheaper) you feel like you are being dragged... which can feel quite disconcerting! The battery pack is stored under the baggage rack and slides in and out with a lock holding it securely. I opted for a slightly larger 500 WHr battery as the bakfiets (due to the heavier weight) burns more electrical energy than the regular e-bike. On my test trip (roughly 20 kilometres), I didn't see a noticeable drop in the battery level, so it appears that this size battery is more than enough!

Much larger battery sizes exist, but I think that would be overkill... after all, the bakfiets ends the day in our garage every night and can easily recharge there. So, there isn't any real need to have too much battery storage... but something a bit more than the minimum is always a good idea! 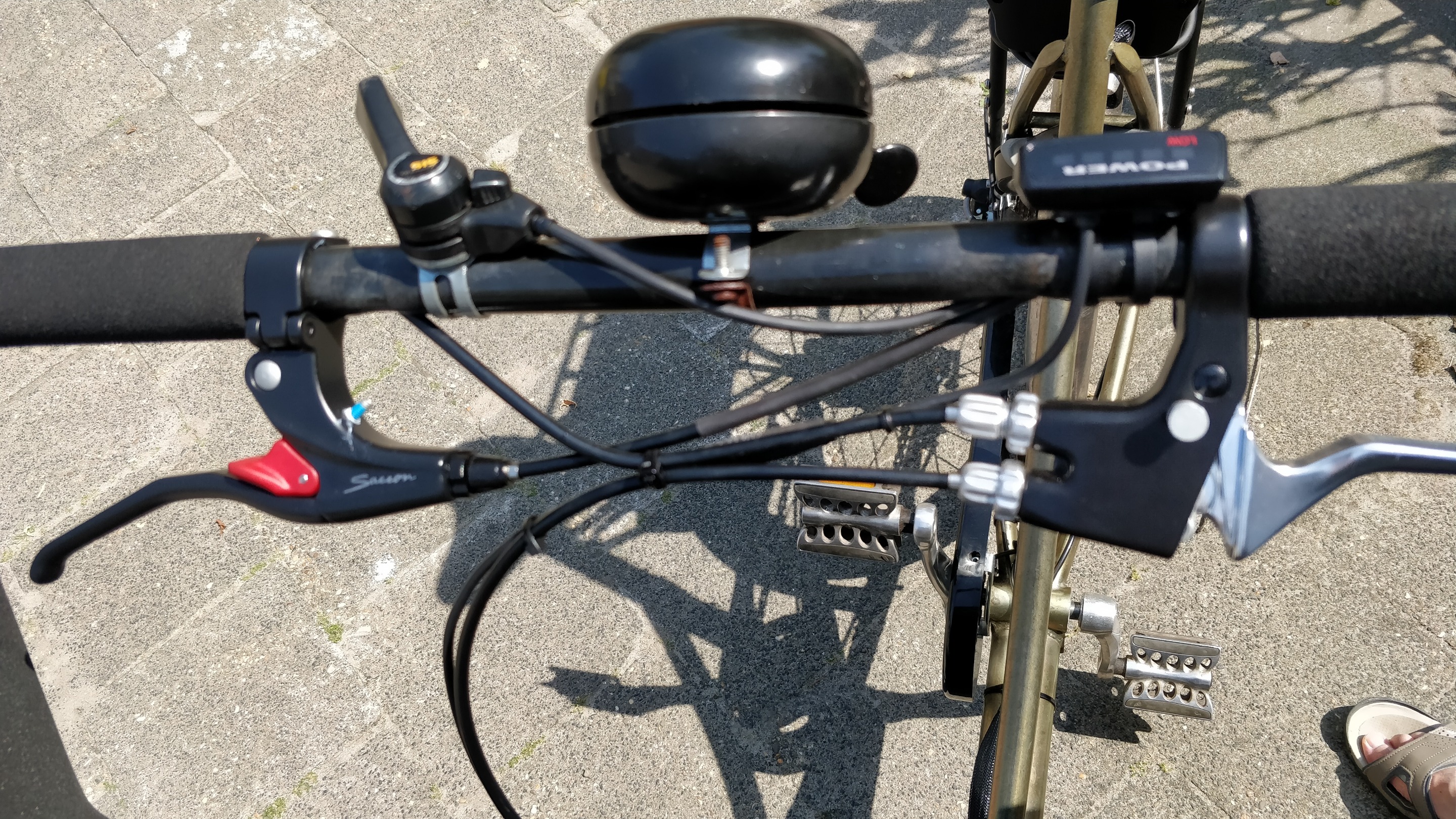 The most important part of the setup was the new braking system. An electric bike goes fast... and the bakfiets (due to the larger mass) has a large amount of momentum behind it. So, good brakes are definitely necessary! There are two separate braking systems here, on the motor (rear) wheel, there is a strong disk-brake system (which works much better in wet weather)... meanwhile on the front there is a paired (linked to the same brake handle) regular bike brake system linked to the two front wheels. This paired system for the front wheels was highly recommended by the fietsenmaker. At speed, if the two front brakes are applied in a non-synchronous way, the bike will slew to one side or the other.... probably throwing the rider in the process!

So, I'm pretty happy with the bike... after the test ride, I wasn't tired at all... and was able to keep a decent speed that was on par with riding a normal (non-efiets) bike. So, a reduction in difficulty to ride... a bit faster... and less dependence on the car! No problems with headwind or any elevation (haha... in Netherlands!).

In wet weather, there is a cover that builds over the contents of the cargo section (it is like a tent...).... this increases the drag significantly, but with this motor... it will be no problem!

There are some adjustments that will need to be made... the rollers for the cabling will be the critical one... however, my girls said that they definitely need cushions to sit on now that the bike is faster and the ride is a bit bumpier!