The wind knocked over Biden did it? How stupid do they think we are?

So you have no doubt seen the video by now of Biden falling multiple times as he tries to bound up the stairs of Air Force One when leaving Georgia. It's actually really funny and well, as much as I think this President is a clown and isn't really calling the shots at all, nor do I think he actually won the election. I can related to tripping on stairs and well, we shouldn't really dwell on this for too long because we have all done it.

I see some people like Candace Owens out there are stating that this is more proof of Biden's cognitive decline and while these aren't her exact words she was suggesting that dude has forgotten how to walk as well as talk. Let's just take it easy and enjoy the fact that we have a fun clip of the President doing what happens to all of us at some point. We just don't do it on national TV.

There are plenty of reasons to think that Biden is an idiot and in the early stages of dementia, but this is not one of them. Instead focus on these things

These are all good reasons, someone tripping on some stairs is just clumsiness that we all have in us.

If it had happened to Trump the media would have been calling to impeach him, would have questioned his overall health, and would have focused on this for days on end. In this particular incident, the media is not really talking about it at all and just wants it to go away. The media is an extension of the Democrat party so there is no real surprise there: Just business as usual.

They probably would have tried to bury this altogether if it wasn't for the fact that multiple networks were filming this and it was going to get out. So they could either broadcast it and make excuses for him - which they did - or they could have just said nothing - which many networks also did.

But where things get stupid is when White House Press secretary Karine Jean-Pierre tried to cover for the trip by telling the press that "It was very windy out there, I nearly fell down myself" as if none of us have ever been subjected to wind before. I live in North Carolina, I know wind as we face hurricanes every single year. Biden's environment looked like a nice sunny day.

Others took notice of this obvious BS on the part of Jean-Pierre and chimed in such as Don Jr. 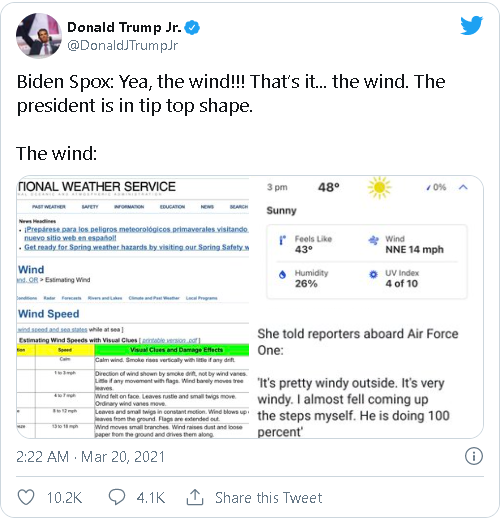 14 MPH is "very windy" is it? That is a light breeze and you know it. This response is much worse than saying nothing and I can't believe that they would actually try to explain it away in this manner.

If you are going to blatantly lie about something, you should probably make sure that said thing isn't easily fact checked to prove you 100% wrong in a flash. As predicted, the MSM is either not talking about the press secretary's comments at all or are calling anyone who questions her comments "far right" or some other usual negative term.

The media will just wait this one out because it is indefensible. Imagine if Sarah Huckabee Sanders had made such a blatant lie of a claim? She would be hounded by the media for weeks.

My goodness. I was able to withstand hurricane strength winds in Iceland (while holding my better half, but still)

it was terribly stupid for them to make this excuse and now we see that the media is doing everything they can to change the subject already. Thankfully the internet isn't going to let it go so easily. Him falling wasn't really even a big deal until they came out with that BS excuse.

A couple of years ago I walked from my house to my parents' house-- 7 blocks-- in a wind that was pelting my face with gravel and throwing shingles and other larger projectiles at me. I didn't fall once. I didn't even lose my hat (but I did have to hang on to it). The official wind speed was later said to have been 75 MPH with gusts near 100.

We have 40+ MPH winds routinely, and often stronger. I haven't seen a rash of people falling over because of it.

Old Joe is simply old and weak. Making him president* is elder abuse.

here in the hurricane zone that is coastal and near coastal North Carolina that is hit by multiple hurricanes every year we tend to view high winds as a sport. 14mph couldn't knock over your laundry, let alone a fully grown adult. This administration is hilarious as is the media that constantly protects him.

I saw the memes and the very limited media coverage of this but didn't hear about the stupid excuse to try to cover for the guy. haha. It would have been better if they simply laughed it off and said "he's fine" or something. George W would have shook it off and laughed WITH the press about it. His press representative saying that the wind did it is colossally stupid.

Did you know that Biden actually ran a campaign ad (I only recently became aware of it) whose entire premise was that Biden runs around while "some people", meaning Trump of course, shuffle down wet ramps that they conveniently edited out of the footage so that the viewer couldn't see that the ramp was definitely a bit dangerous.

I don't really watch the news at all anymore because after the past 4 years I no longer care and have zero faith that anyone in power is doing anything to help anyone at all. Despite this and yes, I do believe the media is on one particular side for the most part, this was everywhere and well, I enjoy a bit of comedy as much as the next guy.

The excuse was stupid... totally agree on that

i particularly enjoyed the videos where they show Trump hitting Joe with 3 golf balls and another one where he hits him with Maga hats.