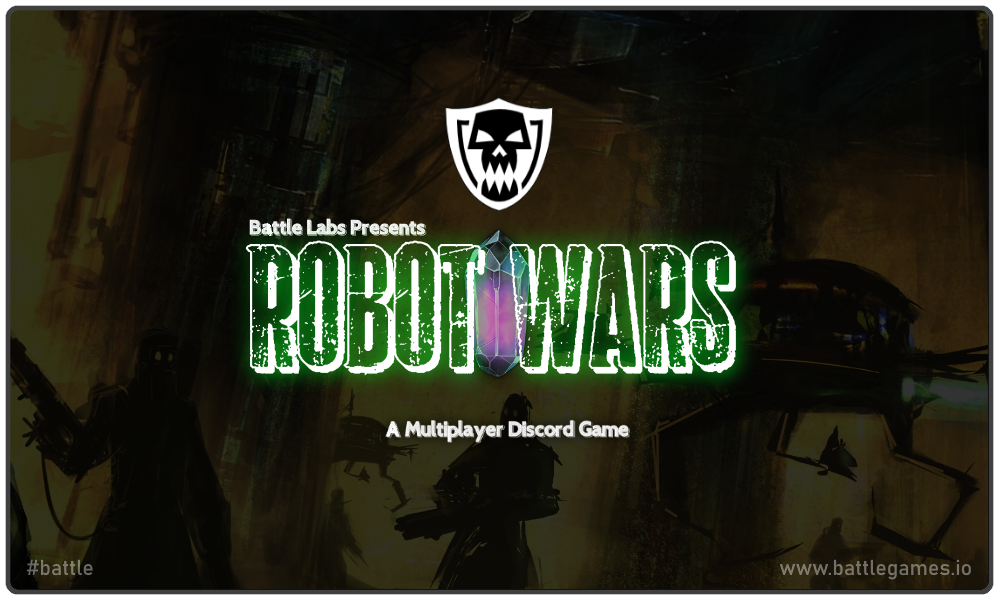 Coded by none other than the young wizard himself @reazuliqbal.

How does it work?

Join the #robot-wars Discord channel and deposit some BATTLE into your in game wallet using the //deposit command. After you have made a deposit you can check you balance using the //b command. Once you have your players start a new game using the //s command.

By default each game costs each player 10 BATTLE to enter and the game is setup for 2 players. However you can specify any amount of BATTLE as an entry fee and a larger amount of players [up to 5 max].

Once a game has started all players roll for their attack using the //a command. The Robot with the lowest attack is killed and removed from the arena. Play continues round by round until there is only 1 robot left standing to claim the spoils [BATTLE/GEMS].

10% of BATTLE Tokens are sent to @null each match. Burning tokens baby right out of circulation and into the void never to be seen again.

The winner of every match earns a random amount of GEMS [1-100] which are automatically used to upgrade your robots Attack Strength also known as Tech Rating. While your initial Attack Strength produces a random roll between 15-30, stacking GEMS on your robot gives you a direct bonus attack on top of your roll.

The more you play, the more powerful your robot grows!

GEMS can also be purchased from the Steem-Engine DEX. The first 10,000 GEMS will be sold for 0.002 STEEM/GEM. Once these are sold the price will increase to 0.
025 STEEM/GEM.

Attack roll of 38-40 is an “EMP Nuke”, the ultimate weapon, pop off a nuke and watch your competition get obliterated!

Now that you know the rules, stop on by our Discord and battle it out for robot supremacy in the Robot Wars arena.

-See you on the battlefield

An SP delegation to our project would go a long ways in allowing us to increase the value of our vote and curation earnings. All earnings stay within our account to support STEEM gaming communities. Thank you for your consideration!

Congrats @battlegames! This post has been voted with the Power of Rada Quest (Trading Card Game). Enjoy it and keep up the good work!
Rada Quest is supporting the Gaming Community!

@battlegames, Combination of Gaming and Token Burning 🔥 is interesting step team. Keep up the good work and bring more value.

Thanks for the support!

Awesome news! Love another way to burn these tokens.

Yessir! Plus a little gambling for a good cause never hurt.

I like where this is going! I may have just purchased the first 19,999 token!

Nice, its good to see sinks being created.

An actual true sink is nice! I'm fine to keep burning tokens, and will keep doing so.. but a real sink needs to see tokens come from the general population and be removed from circulation and this does that! Unless you win that is, then your just filling your bag and stacking!

I saw this game on the discord, looks very funny :D