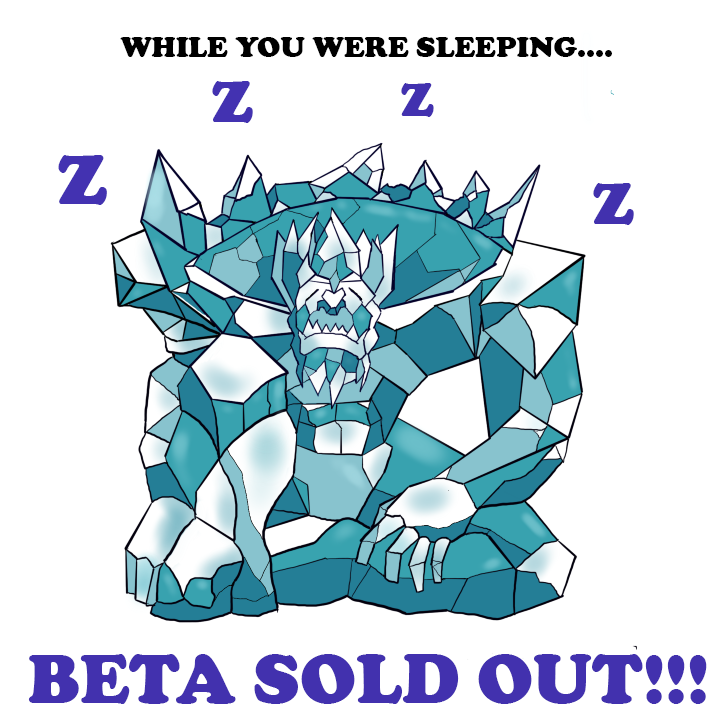 Steemmonsters BETA has finally sold out AND I, like the careless fool I am, only ever bought about 5 packs or something..... I don't even know, but it wasn't many! I was desperately trying to save up some DEC to buy one of the final packs but I just couldn't stop giving it away to my Glorious Guild : IMMORTAL ARMY. Anyway, boohoo, I was sleeping, SO WHAT? Im a Frost Giant anyway....no-one can hurt me.
So I thought maybe I was never destined to be a Steemmonsters BeastLord? Maybe I will always be consigned to the silver league....with my pitiful level one monsters..... BUT THEN! THEN I SEE the Steemmonsters Art Competition with BOOSTER PACKS as PRIZES! And suddenly....my heart fills with hope! and my eyes fill with golden dragons! And I grab my trusty ipad and begin to furiously recreate my Frosty Sleeping Legendary (I know no-one loves the frost giant, but I do! I only have 3 legendaries, the other two being the angel of light and the elemental phoenix and don't get me wrong, the phoenix is a badass, but there is something about old Frosty that gives me purpose on the battlefield. He has won more fights for me than I can thank him for)
And here is the result:

See how he snoozes, so lovable, so grumpy? Lets hope he never wakes up to realise what he has missed.... :(
He will be furious....

Anyway. For those of you interested in my creative process.... Im not much of a designer so as you can see I pretty much just copied him as best I could from the card but changed a few things like his expression from angry to unconsious, and his fist from clenched to relaxed and resting on his leg. Initially I just sketched him out with a pencil tool (I use procreate)You might need to turn your contrast up to see it because I sketched it VERY LIGHTLY! See below:

Pretty amazing I know.....
And then I proceeded to ink over it with some sort of studio pen thing that gives you the option to straighten the lines out if you hold the pen nib down, which was pretty useful for ensuring that he looks like ice and not jelly! Although I threw a few natural lines in there as well to try to negate the gross clipartyness of it. et Voila!:

I quite like this stage. In someways it is my favourite. So much potential....its like you know if you had a half decent digital artist to hand, they could probably make it look really cool from here.....but alas.....I have only me!

Still....I can't help but love old Frosty and Im quite pleased with how the colours brought out the 3dimensional qualities in him. This stage was a real nightmare because its the part where you discover that none of your black lines actually connect and so the colour keeps spilling everywhere and countless annoying micro-adjustments become necessary. But I got through it and then it was just time for some fluffy finishings with the spraytools:

Judge for yourselves whether you think that is an improvement or not. I almost prefer it before but I felt uncomfortable leaving whole chunks of him pure white and so in the end I opted for the spray tan Frosty. Heres an image of the original card for comparison:

As you can see....my guys a lot more blue. But then you would be wouldnt you? MAYBE.....just maybe....we can cheer him up by sending me a BETA PACK BOOSTER PRIZE!!!!! (pretty please?)

I've never had that card, but you did a great job on capturing his icy likeness. I also missed out on buying more packs as I couldn't free up some funds in time. I'm resigned to not getting in on everything. I am hardly playing Monsters these days anyway. I assume some people bought a lot of packs. Not even checked what my cards are worth lately.

yeah, well you cant get in on everything! hehe (or in my case - almost anything!) But the cards do seem destined to be a good investment because the game has been going from strength to strength. I guess the success of the big kickstarter release will be very telling...

My cards are worth more than I've paid, so I'm happy enough. Some people have thousands of cards. I hope that's a good investment.

yeah, I mean, I bought the starter pack for the initial $10 or whatever it was and Ive probably spent that again on a few packs and some individual cards....maybe more like $30 altogether and my deck is worth about triple that....but mostly because I earned a fair few reward cards over time

Great job with the Frosty Basil. It's not a card I win with very often. It probably has very specific uses which I've not been able to fathom yet.

Fingers crossed you win the contest. That would be brill! 😍

haha. Im sure Im not using it in any way you havn't fathomed! I usually stick a couple of magic users behind it and the healing crab if I have enough to spend!

Good luck for you with our contest!

damn.... I hadn't factored peanut butter in to the equation! That might just give you the advantage....! XD

Let's see, let'see. In a few days we will know more. I look forward!

i like your art on the card!! i didnt get that many beta packs but remember we are all still early players in this game! we will all rule the lands of Splinters together!