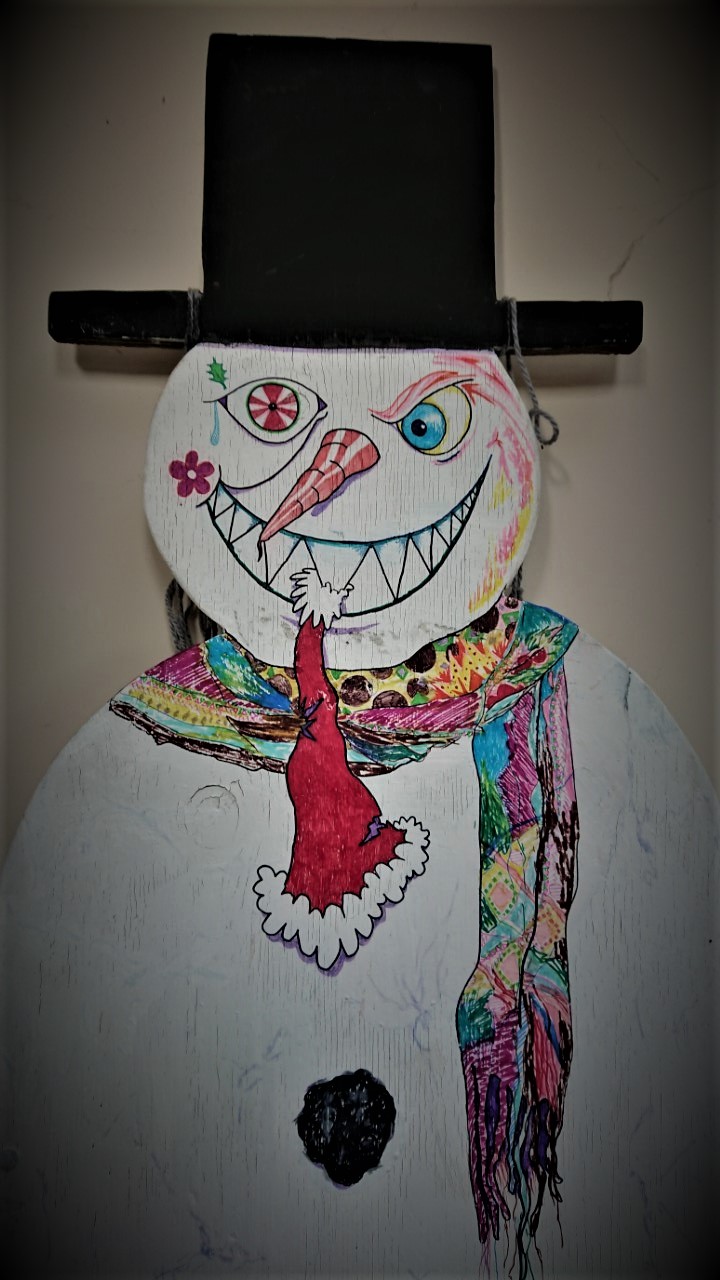 Well I got sick of waiting for snow, so it was time to get creative for the @carlgnash Deranged Snowman challenge.... We picked up this fellow from outside a primary school (creepy I know!). They had done a Christmas play of some sort and they were chucking him out, which as a fellow actor I know can be very tough to take. So we brought him home and decided to give him a bit of a respray... he was definitely not so sinister before. But then, maybe ol' saint nick shouldnt have given Mr.Frosty the sack right before Christmas Eve. He's paid for it now......

As you can see he's a bit of troubled individual but alongside the maniacal leering is a tear of remorse being shed for his old employer. No-one wants to have to turn to savagery, but poor old Frosty was pushed over the brink of despair and in to the complex realm of evil genius, and frankly, Santa Claus never stood a chance.

There he is in his full glory, bringing a gleam of Xmas horror to our festive season

One can't help but feel that ANYONE could be next so its fair to say that Christmas dinner was a bit tense this year. No-one wanted to say the wrong thing incase they became Frostys main course!

Well thats all from my Deranged snowman entry but before we move on, I feel that this is an interesting opportunity to share an old video that me and @sazzler made many moons ago. Its a slightly unsettling, experimental piece, showcasing in a minimal way, how snowmen can effect your mental health. Do take a look if you have a couple of minutes of your life to throw in to a pit. Its also a chance for you to catch a glimpse of my mother acting!

Im sure that has added something very special to your psychic landscape for the day. No need to thank me, the permanent smile on your now frozen face is all I ever need.

And now fair Steemies, we are waving goodbye to another decade.
Have a transformative New Year
and see you in 202020
BIG LOVE
Basil x x

Snowmen are creepy at the best of times.

Hope you had a great Christmas and wishing you all the best for 2020!

You've been chosen to be featured in @creativecoin's 🔥DAILY BURN🔥 post!

Whoa dude. WHOA.
That video. What the heck?!
😍@carrieallen

ps. I did specifically state in the title that you might regret watching it.... XD

That's an awesome deranged snowman. The only way it could have possibly been better was as if it was the prop the students used in their play!

haha! yeah... I should have just popped it back in the skip outside the school....that would've freaked a few 6 year olds out!

yeah just kinda wedge it in next to the swing set in the playground :)

spinning slowly on the roundabout....

WTF obviously you time traveled back to the past to plant this deranged snowman video for just this occasion. Wow. This post is really a double whammy, first the straight right jab with the repainted snowman prop and then wammo the looping left hook that I didn't see coming with the snowman ribcage ritual psychosis paranoia-inducing haymaker well hows your mother and bobs your uncle that was that, DOWN FOR THE COUNT and next thing you know I am looking up at the lights and asking the doctor what happened?!?

Its like Ive been prepping for this fight my whole life. Suddenly the stars aligned and I finally became the person I was always supposed to be. Right Jab, Left Hook, KNOCKOUT. Ice Cold Mr.Frosty, cooler than an articulated cucumber, floats like a snowflake, stings like a freezepop. Someone get this guy an icepack!