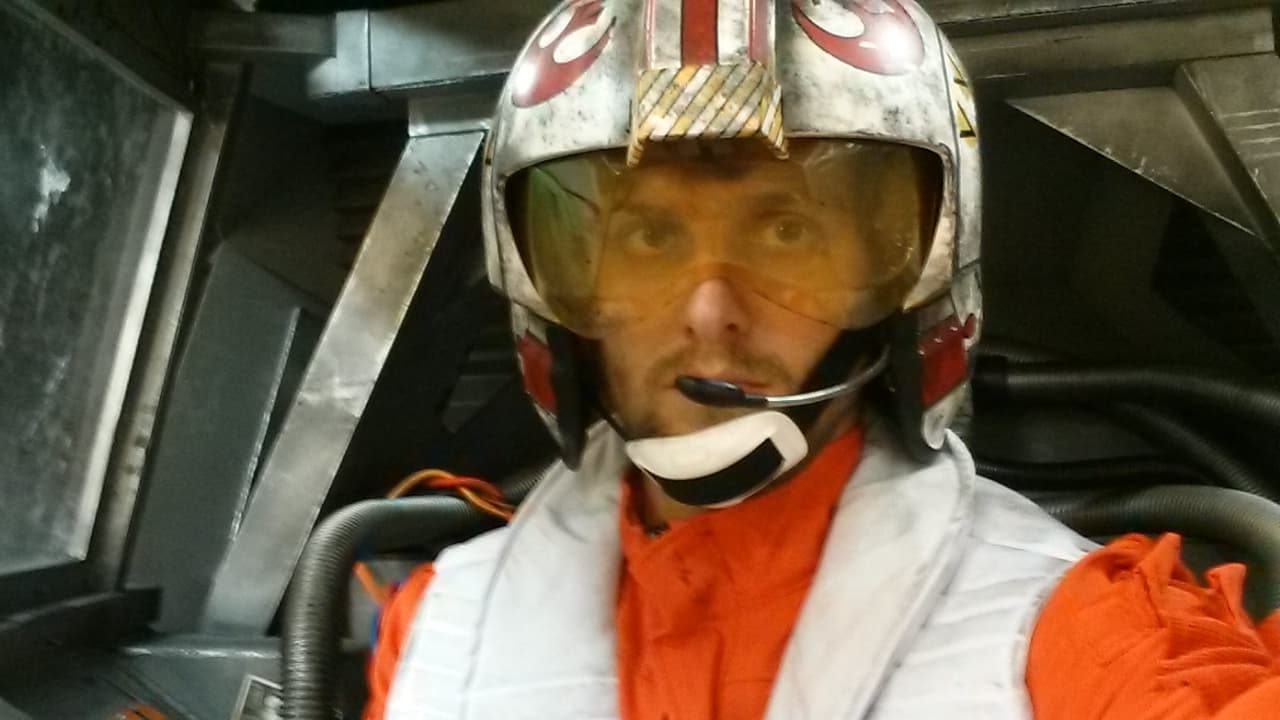 Soaring through space, targetting TIE fighters, barrelling rolling past distant stars and letting out the battlecry of a man who knows he's probably on a kamikaze mission....

No, Im not in the real Star Wars. Sadly. This is my latest involvement with the FXHOME tutorial universe that I have become a staple part of in the last few years. Basically showing indie film makers how to reproduce the awesome effects of Hollywood blockbusters using HitFilm - a film editing and compositing software developed in Norwich! (my nearest city).
These guys are super-great at creating amazing scenes on a budget. Here are some of the ones Ive already been involved in:
Rebellion: A hit film story (our first StarWars tutorial film!)

which was ridiculous fun to shoot and you can find out more about in my original blog: https://goldvoice.club/steem/@basilmarples/actor-diaries-star-wars-i-have-been-on-the-light-side-and-the-dark-side

....and HaloJump (which is a shot by shot recreation of the same scene from Godzilla (the one by Gareth Edwards))


That one involved a lot of me being strung up from the ceiling which was pretty intense. Check out my original post for more info and behind the scenes photos: https://goldvoice.club/steem/@basilmarples/actor-diaries-halo-jump-godzilla-re-creation-me-jumping-out-of-a-plane-watch-now

Pretty cool hey? Im not quite a real actor yet but hopefully this is all leading me on the way to getting some great roles in the future....fingers crossed Steemies!
In the meantime, heres a behind-the-scenes shot of me in the x-wing (which as you can see, is just a frame balanced on some tables!).

I can't wait to see the finished product, which should hopefully be released in December just before the new Star Wars film comes out!
Onwards with Courage fair Steemies. The world will soon be ours!
Basil x

I think if you were in Star Wars it would really elevate the whole enterprise tbh :)

Hi Basil, this is excellent.

Would be interested in coming on my new show - The Buzz - to talk about this?

Sure! My voice is a bit up and down at the moment.... sore vocal chords! But If I can speak comfortably Id be happy to come on the show : )

This is really cool!

I hope you'll keep us posted on the progress of this project. I think it would be a lot of fun to be part of something like that!

I most certainly will! Theres a couple of other things to share about as well so Im going to try to be a bit more bloggy now that the cold weather is setting in...

@basilmarples You have received a 100% upvote from @steemguardian because this post did not use any bidbots and you have not used bidbots in the last 30 days!

Shudang! That's some pretty cool shit! did not realize what was possible without the big guns ;)

I know right? Modern software and a few lights, bam! You're in hollywood!

I know right? Modern
Software and a few lights, bam!
You're in hollywood!

...hey thats quite a cool haiku

my favourite part was. "You're in hollywood."