Power up 200 Steem + 100 Steem Delegate to @Promosteem.com [I get member title and PromoSteem community t-shirt] 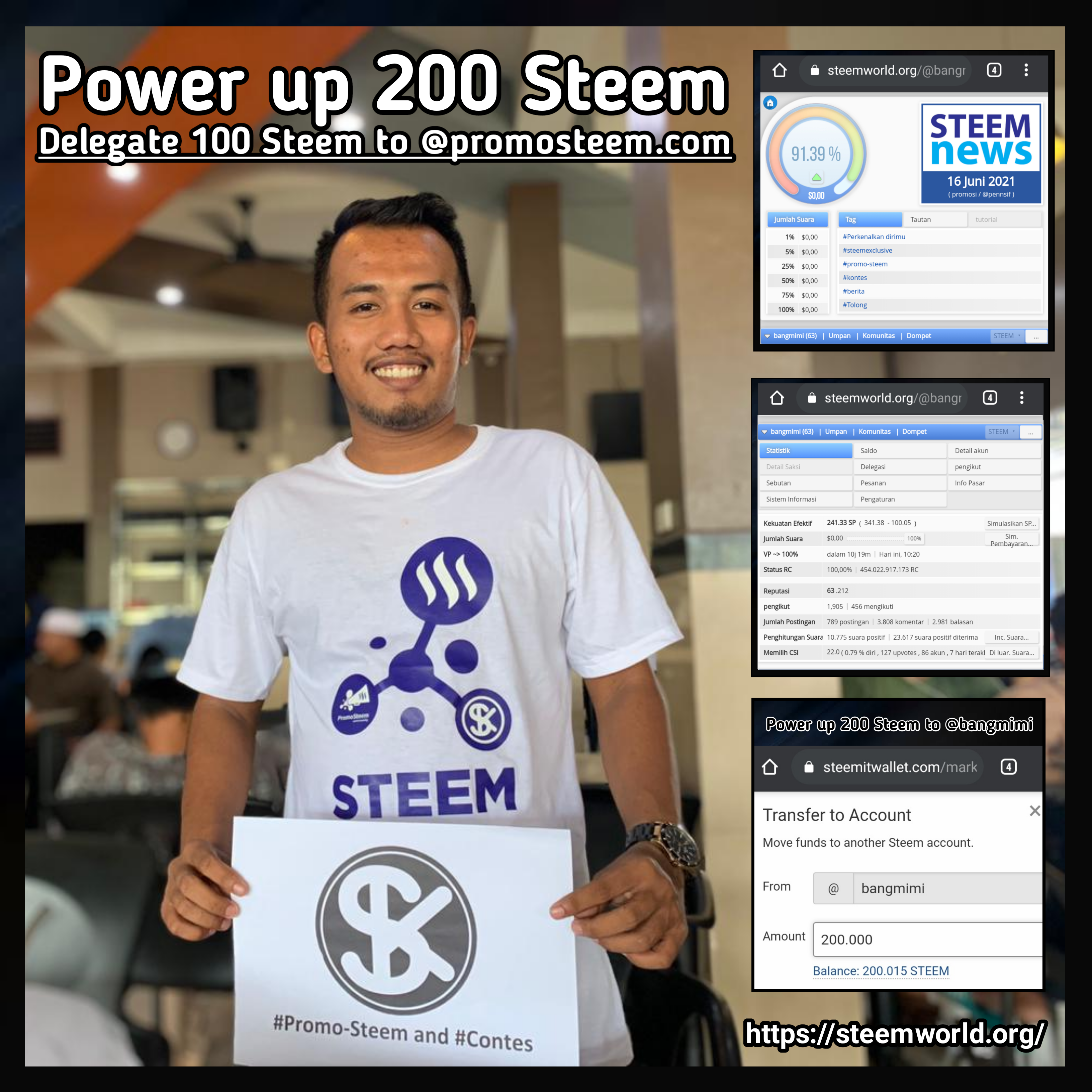 Last month I was busy with several projects that I was planning, then continued with program planning that supports the development of #Steem and #Steemit. As a result, I have embraced several youths in Indonesia and formed and reintroduced "The Youth Steem Community" to the public.

This month I run programs that support #Promo-Steem and also PromoSteem promoters in reaching active users, especially in Indonesia. So far we are still doing #Promo-Steem publicly and inviting new users to join #Steemit. In this case I support the realization of the Mission and Vision of @youthsteem.team and also the PromoSteem Community.

I'm planning to collect 500 Steem for this month, but there are some problems that I'm facing recently. Besides that, I also use the little funds I collect to support and help promote #Steem to Indonesian people and youth.

I currently have 200 Steem left, so have to wait a long time to collect another 300 Steem. I think I should immediately do a Steem Power up so that my Steem Power will increase a little. I've done Power up 200 Steem for this month, and I've delegated 100 Steem to support PromoSteem Community.

Planning for this delegation had already started before the specific policy was set by the PromoSteem Community Official. I've prepared as a result of the rewards to do Power ups and leave some Steem to delegate. I think it really supports the Community project to help support participating members and users.

One month since the establishment of the PromoSteem Community, I have joined this community, but I don't often contribute to creating content. Maybe at that time I had not come up with an idea for content, then some later I created a project and planning program that I wanted to promote in the community.

I get member title [Member/Pu level 1]

Day after day passed, many of the best posts without getting curated. But I was never discouraged by the results I had received at that time. I continue to contribute and I have the determination to continue to be consistent in doing the work to help support #Promo-Steem. For me, doing #Promo-Steem and inviting Indonesian Community and Youth to join is very fun.

I just became a member, maybe this is an achievement that I just got in this Community. So I have to do my best in the future so that I can be entrusted to be a part of representing the Promoter of the PromoSteem Community in Indonesia. Thank you for giving me the label as a member and I am very happy to be joining a community of great people in it.

I get PromoSteem community t-shirt

Thank you very much for the PromoSteem Community promoter Team who has given and trusted me from one of the recipients of the Community T-shirt. This is the beginning of a new spirit for me to work harder and be better in the future. This achievement really supports me in doing #Promo-Steem and reaching many active Steem users in Indonesia.

A few weeks ago I finished my project for 10 shirts and handed them over to the "The Youth Steem" team. At that time I managed to get Sponsorship from #Onehundredsteem (SK Promotion). So today I managed to gain the trust of the PromoSteem Community to receive a #Promo-Steem t-shirt and become an official member. Hopefully this will be an encouragement and motivation for me and also for other active users to be consistent and work as well as possible.