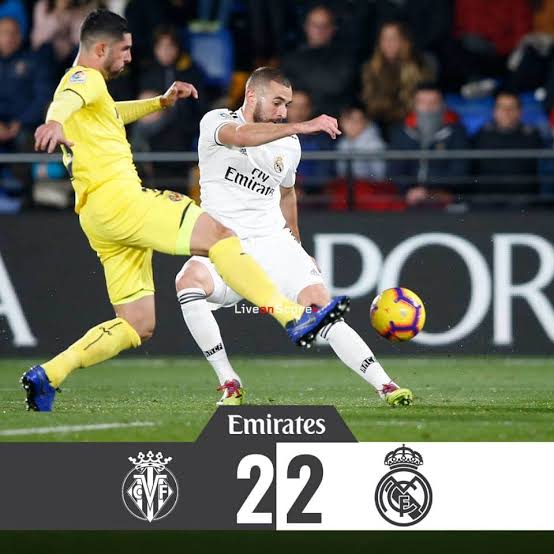 Lots of things went wrong in this match against Villareal at the Ceramica. Starting from the fact that this ground has always been a tough one for the whites in recent seasons, it doesn’t change the fact that they had enough quality on the team to get all three points but they managed to end with a point, all thanks to out-casted Gareth Bale’s brace and no thanks to another horrible defensive showing and Thubiat Courtois making me want to curse the day he was signed into the club.

The Real Madrid team was plagued with injuries as both quality summer signing Eden Hazard, James Rodriguez and Isco are all injured. All three of these players are very vital in the team’s attack and two of them are sure to be in the coach’s starting lineup when fit. Due to this unfortunate situation, Zidane deployed a 4-4-2 formation. Thubiat Courtois retained his place in between the sticks. Raphael Varane and Sergio Ramos both partnered each other in central defence while Dani Carvajal and Ferland Mendy who replaced Marcelo both completed the backline in their right and left back positions respectively.

The midfield consisted of Toni Kroos and Casemiro in double pivot while Gareth Bale and Lucas Vasquez played as left midfielder/winger and right midfielder/winger respectively. New signing Luka Jovic was granted his first league start alongside Karim Benzema in attack.

It was made obvious within the first ten minutes what Zidane’s approach was, cross-storm. The players rammed series of crosses into the box hoping to make good use of the two strikers available but to no avail. Both Benzema and Jovic were well marshaled by the Villareal defence and Benzema’s only attacking threat ended up hitting the woodwork. It didn’t take long from the start of the match for Sergio Ramos to cost the team with a giveaway, one that resulted in Villareal finding the back of the net. Real Madrid would go on to equalize through Gareth Bale after a nice combination between Carvajal, Jovic and Mendy. Villareal retook the lead in the second half after Casemiro failed to close his man on the edge of the penalty area early and Bale would go on to score a stunner in the latter stages of the match to earn the team a draw.

I continue to be highly disappointed with the current Real Madrid team and their display. It is not enough that they are not creating clear cut chances much and failing to convert they created, they just cannot stop conceding. The backline starting from Courtois is a mess. This is the 11th consecutive match without a clean sheet for the Belgian and it is very disappointing. Sergio Ramos and Raphael Varane partnership seems to be very out of sync and a liability to the team. Both experienced defenders appear uninterested when it most matters and leaves the team vulnerable on most occasions. If Villareal had been experienced enough, they undoubtedly would have won this “attack, attack and attack” match.

So many of us Real Madrid fans can’t wait to see our summer signing Eden Hazard back in action, at least we hope he will spare us the blushes most of the times like Cristiano Ronaldo once did.