A Ball is in Your Court 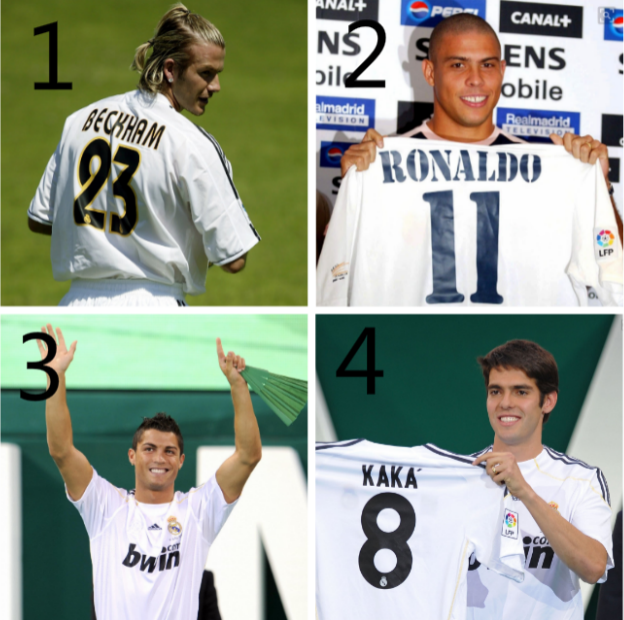 I was navigating through a popular and favourite sport site as usual, reading the latest sport news especially about my favourite club team Real Madrid of which I subscribed to make their news more essential for me at the front page, and then I came across the above image with a caption, “If You Could Bring Back One Player In Prime To Real Madrid, Who Would It Be?”

The four players you see above bar the handsome one with a number 23 on the back of his shirt has each had the opportunity of registering their names on Fifa’s World Best Player list.

They are according to the order of placement; David Beckham of England, Ronaldo De Lima of Brazil, Cristiano Ronaldo of Portugal and Ricardo Kaka of Brazil. Each of these players are undoubtedly legends of the game and if you have an iota of doubt about that fact, you must either be a hater or simply ignorant. Let’s take a quick brief look to their legendary stories.

This handsome British prince is the only player amongst the four that didn’t win a World Best Player Award but he is counted amongst them because he brought something very rare and special to the world of football.

David Beckham is known to possess a special feet that curves the ball just like a banana is with a curved figure. Beckham is a free kick specialist that has hearts of the opponent running at an unusual speed whenever he positions in front of the ball because it is near certain the goal keeper won’t see it coming and is likely to find the ball at the back of the net before he moves.

David Beckham finalized his prime football at Real Madrid after he was bought from Manchester United.

Laughs, can I please get a “Yaayo” if you have seen a striker(Top 9) more efficient, deadly, skilful and mesmerizing than the iconic Brazilian number 9 since his retirement.

Ronaldo De Lima is a defence tormentor, a heartless striker who is heartless for the right reasons, lol. He is a world cup winner, three times World best winner and conquered Europe at club level as well. It was a pity we had to watch time and age catch up with Ronaldo and he did himself no good too, actually as he started gaining weight unprofessionally.

Please if you do not know Brazilian Ronaldo De Lima or didn’t have the leverage of watching him kick football, the YouTube is there for you to entertain yourself, come back and thank me properly.

Best attacking midfielder football has ever witnessed (you are free to bring up your arguments). Kaka has got a touching story in his progress to becoming a legend of football after a pool-side injury almost cost him his football career but he held on and believed in his Creator and he was never disappointed more reason his special celebration involves him performing the sign of the Cross before pointing two fingers to the sky in appreciation.

A Kaka in his prime lit Italy with Ac Milan. There were only few teams that could stand them for full 90 minutes home and abroad. He won numerous trophies including the award for World’s Best Player and only has his injury-prone nature to blame for not giving his all for Real Madrid.

Now, there is a reason I left this name last in my list and that obvious reason is because he is my number one choice. Life after life, day after day, I will always pick Cristiano Ronaldo over any other player if I had the choice of bringing player back at Real Madrid.

Words cannot express how much I love this man and this kind of love is brought about as a result of his dedication and passion to his profession that is second to none.

This Portuguese living legend paved his way to the top from Sporting Lisbon in Portugal before his display attracted former Manchester United coach Sir Alex Ferguson who recruited the attacker and boiled him into becoming a superstar the entire world loves watching before star-thieving team in Real Madrid(lol) splashed a huge amount on the faces of the Manchester United board that they had no other option but to let their star man go and with that came the most expensive transfer in football history.

Ronaldo went on to conquer Spain same way he conquered England and even more. He won 4 extra World Best Player awards at Real Madrid and pushed himself too hard for his Country and was rewarded with an Euro and Uefa Nations League trophy.

In football, you will barely find a player like Ronaldo, one willing to push himself to any extent just to win. A player that hates losing than dying, a example to other players who despite his status still arrives training early and carries everyone along. Very few players are willing to adapt quickly in a new environment and change their game pattern to suit their age but Ronaldo did and that explains very much why he is still hitting great strides in his 30’s when others at that same age are left at the bench or planning retirement.

As I said earlier, there isn’t words enough to describe Cristiano Ronaldo Dos Santos Aveiro other than he is a TRUE LEGEND of the game I would bathe clothed to see him play for Real Madrid again at his prime.

Good to see you here bro