How those bombshells in ‘Spider-Man: Far From Home’ post-credits will impact the Marvel Cinematic Universe going forward 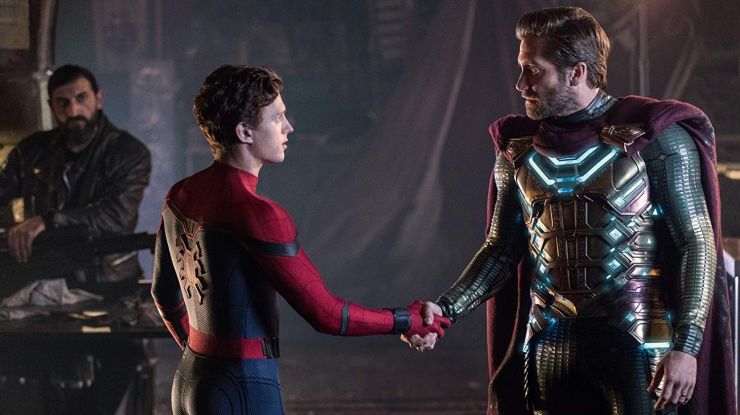 With the debut of “Spider-Man: Far From Home” in theaters this week, Phase III of the Marvel Cinematic Universe has come to a close, but Disney and Marvel aren’t done telling stories about Earth’s mightiest heroes.

“Far From Home,” which was distributed by Sony, picks up not long after the events of “Avengers: Endgame.” Tony Stark (Iron Man) is dead and the world is looking for a new superhero leader. For some, Spider-Man seems to be the ideal choice. After all, he was Iron Man’s protege.

But for 16-year-old Peter Parker, the responsibility of living up to Tony’s legacy is almost too much to handle. So, he joins his friends on school science trip to Europe, hoping to hang up his suit for a few weeks and just be a regular teenager.

Of course, it’s hard to ditch his alter ego when elemental creatures begin attacking cities and Peter is called to assist a new hero dubbed Mysterio.

For many, it was no surprise that Quentin Beck, aka Mysterio, who paraded himself around as a hero from another dimension, turned out to be a fraud. Mysterio has been a top-tier Spider-Man villain since his debut in the comics in 1964 when he framed Spider-Man for a museum robbery.

Mysterio is revealed to be using advanced holographic technology and drones to fake attacks in major cities across the world. He then swoops in to save the day, making himself appear to be the hero.

He appears to have been defeated at the end of “Far From Home,” as he is fatally wounded by one of his own machines during an epic fight with Spider-Man.

However, halfway through the credits, it seems that Mysterio has one more trick in store for Spider-Man. The villain and one of his cohorts doctored footage from the fight to frame the young webslinger for the attack. This footage appears on a news show hosted by the infamous J. Jonah Jameson. (Jameson’s newspaper “The Daily Bugle” has been reimagined as an InfoWars-style video site.)

The part is played by J.K. Simmons, the actor who embodied the cigar smoking newspaperman in Sam Raimi’s “Spider-Man” movies in the early 2000s. The ornery Jameson calls his fellow New Yorkers to action against Spider-Man, who Mysterio reveals to be Peter Parker before his video cuts out.

Peter’s outing is the perfect bookend between Phase I and Phase III of the Marvel Cinematic Universe. After all, Tony Stark voluntarily revealed his identity in the first film of the franchise “Iron Man.”

Of course, the big question is how will Peter clear his name now that he’s been labeled a villain?

Now that Thanos is defeated, little is known about the direction Disney plans on taking the MCU, but a second post-credit scene may have a hint. As the final credits roll, audiences are shown that the Nick Fury and Maria Hill they’ve been watching the entire film are actually Skrulls, shape-shifting aliens from “Captain Marvel.” In fact, they are Talos and his wife Soren, friends of the iconic heroine.

It’s then revealed that Nick Fury is on some sort of highly advanced ship with a number of other Skrulls. It’s quite possible that this vessel is actually a space station called The Peak from the comics.

In the source material, a counter terrorism and intelligence agency known as S.W.O.R.D. (Sentient World Observation and Response Department) is created as a counterpart to S.H.I.E.L.D. It is responsible for dealing with extraterrestrial threats.

With “The Eternals” movie in the works, it wouldn’t be surprising for Marvel to incorporate this organization into its storytelling. Especially, considering Carol Danvers, aka Captain Marvel, is a noted member. Marvel head Kevin Feige has said that Captain Marvel will be the new face of the MCU going forward.

Disney has already revealed at least nine upcoming movies and TV shows tied to the MCU, but it doesn’t have to worry about franchise fatigue. In its opening day, “Spider-Man: Far From Home” hauled in a record $39.3 million in the U.S., the highest movie opening on a Tuesday in film industry history.

The film hauled in more than $120 million in China so far, having opened late last week.