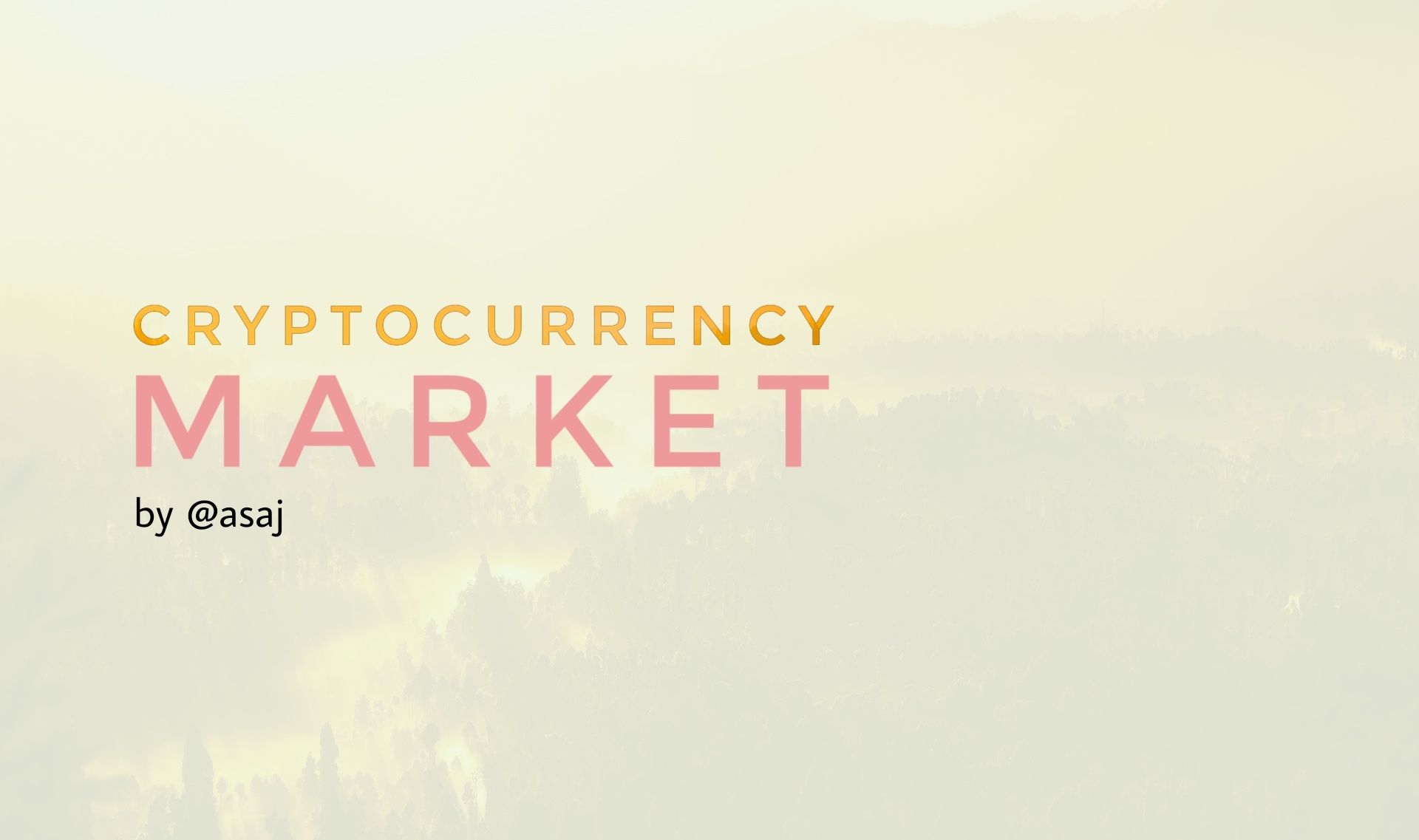 There is an ongoing battle between a lion and other smaller cats; fighting for controlling power, influence, and dominance in a certain kingdom.

Created by me on PicsArt

That kingdom is better known as the cryptocurrency market; the lion and king of the jungle is, none other than, Bitcoin. The small cats, on the other hand, are altcoins.

However, one of these small cats have grown so big we might as well call it a tiger. This cat may someday share the throne with Bitcoin. Its name is Ether. Many people no longer view Ethereum's coin, Ether, as an altcoin because of how popular and how massive its platform has become.

This week’s task focuses on the concept of dominance in the crypto world, the manner in which cryptocurrencies behave and how they are affected by external factors, the meaning alternatives coins (altcoins) season, and lots more.

The Concept of Dominance in the Crypto Market

Dominance is a term used to describe control, power, or influence. In the cryptocurrency market, the dominance of coin is gotten by comparing its total value (market cap) in relation to the total value of other coins in the market.

When a token or coin has the highest total value in a market, that coin or token becomes the dominant coin. This means that the people have invested more money in that coin than any other one in the market.

When Bitcoin was created, it had absolute dominance because there were no other cryptocurrency in existence at the time. Later on, Ethereum's coin, Ether, was created. And as time went by, Bitcoin had to share the market with other coins. Even so, it still have the highest market capitalization.

It is so dominant that a fall in the price of Bitcoin can affect the general prices of coins in the cryptocurrency market.

As at the time of this writing, Bitcoin's Dominance according to CoinMarketCap is 44.38%.

However, TradingView gives us a reading of 42.94%.

BTC.D on TradingView is more accurate because the value is in real-time.

Screenshot of BTC fall in 2018 from tradingview.com

Screenshot of DASH fall in 2018 from tradingview.com

DASH followed a similar downtrend and fell from $175 to $55.

Screenshot of EOS fall in 2018 from tradingview.com

In addition to that, EOS fell from $5.65 to $1.55. However, these were not the only coins that saw a loss in value. Hundreds of coins in that period lost a good portion of their value.

Screenshot of BTC fall in 2020 from tradingview.com

March 2020 saw another strong market fall as Bitcoin crashed from over $9,100 to $3,600, which is a 60.4% crash in BTC price. This dump in BTC price caused a strong fall in the cryptocurrency market.

Screenshot of LTC fall in 2020 from tradingview.com

Screenshot of XMR fall in 2020 from tradingview.com

First of all, altcoin or alternative coin is a term used to describe all the other coin in the crypto market. They are viewed as alternatives to Bitcoin. Now that we know what altcoin means let's define altcoin season.

Altcoin season is a period where altcoins gain more market capitalization than Bitcoin, which means that people are buying more altcoins than Bitcoin. Traditionally, Bitcoin is the dominant coin but there are times when its level of dominance reduces.

The 29th of January 2018 is an excellent example of an altcoin season. The total value of altcoins reached an ATH (All Time High) dominance and Bitcoin had a 33.24% market dominance. That is the lowest level of dominance Bitcoin has had since it was created. You can see it in the graph above.

Are we in an altcoin season?

The short answer is yes!

How to determine an altcoin season?

Whenever most of the other coins in the crypto market experience a rise in value that is greater than the rise in Bitcoin's value, that period is known as an altcoin season.

Another way to identify an altcoin season is when Bitcoin Dominance reduces to less than 50%.

Two of the Top 50 Altcoins

Let's talk about two altcoins that is among the top 50 in the crypto market.

Cardano has been around since 2015, but it was officially launched in 2017. It was founded by Charles Hoskinson. Charles is also a co-founder of the Ethereum blockchain. However, Charles wanted to solve some of the problems that Ethereum had. Those problems include the high gas fee and high energy consumption of Ethereum.

Charles solved these problems by creating Cardano which uses the proof-of-stake (PoS) algorithm. The PoS is more energy efficient than the Ethereum's proof-of-work (PoW) mechanism. He also made Cardano more decentralized than Ethereum network.

The native coin of Cardano network is called ADA.

Polkadot was launched in 2020, and it was created by three co-founders: Dr. Gavin Wood, Robert Habermeier and Peter Czaban.

Of the three co-founder, Dr. Gavin Wood is the most popular. He is one of the co-founders of Ethereum blockchain. He is a British Computer Scientist who also created another Top 50 altcoin called Kusama.

The technology used to create Polkadot enables it to work easily with other blockchains. It has a very high scalability, thanks to its flexibility and adaptiveness. It is built on Web 3.0 which makes it easy to use and upgrade.

Normally, to add new features to a blockchain network, the platform needs to be forked. To fork a blockchain basically means to change its protocol. Interestingly, Polkadot doesn't need to be forked to upgrade it or remove bugs. Polkadot is unique and has great potentials.

The native coin of Polkadot blockchain is called DOT.

The Impact of Relevant News on the Prices of Cryptocurrencies

Let's consider four examples of how news have affected the prices of cryptocurrencies.

Here are the details:

On the 5th of May 2021 ChainSwap announced a partnership with Raydium Protocol. This announcement affected the price of ChainSwap's native called TOKEN.

From the chart above, we can see the value of TOKEN before the announcement. The announcement marked the beginning of an uptrend for TOKEN. TOKEN price move upward from $1.91 to $3.15.

NEWS 2: SpaceX to launch a Moon Satellite that is Funded by Dogecoin

On the 8th of May 2021, Elon Musk announced the launching of a Moon Satellite that is funded by Dogecoin. This affected the price of Dogecoin.

NEWS 3: Vitalik Buterin donates half the liquidity of SHIB

This news is a tricky one. It happened yesterday. It is good news to the receiver of the donation but bad news to investors who bought the coin. This is because if the recipient of the donation decides to liquidate this amount of SHIB, it would drive SHIB price downward.

As a result of the news, investors started to sell their holdings in a panic, which led to a 50% loss in the value of SHIB.

On the 13th of May 2021, Elon Musk announced that Tesla will no longer accept Bitcoin as a method of payment to buy its electric cars. The reason he gave was that Bitcoin consumes too much energy to mine, and this increases the amount of fossil fuel pollution in earth. Now let’s how the this news affected the price of Bitcoin.

This news made Bitcoin price to dump from $54,300 to $48,500. This was expected because Elon has a history of influencing the prices of cryptocurrencies.

Eclipse falls under the category of tokens I call "valueless coins." It has no real value. It price way lesser than $1, and as such, we can call it a penny cryptocurrency. It was listed on PancakeSwap in April 2021.

Eclipse is a BSC (Binance Smart Chain) utility token that was created as a means of payment in Eclipse platform. Transfering the token will result in a 6% fee; 3% is shared among holders of the token, while the other 3% is divided into two parts. One part goes back to the liquidity on PancakeSwap and the other part is sold for BNB.

One percent of the total supply is held be the developers of the token, and four percent is locked for about six months. As for the liquidity pool, it is locked for the next five years.

After Vitalik Buterin donation of SHIB to India's Crypto Fund, several penny cryptocurrency lost a good portion of their value. Eclipse tokens was one of them. It has lost about 13% of its value since Vitalik Buterin donantion news broke the internet.

Eclipse token is known as ECP. And it is currently listed on PancakeSwap.

To be honest, it took me days to complete this assignment. I had to do a lot of research to answer all the questions accurately. I am glad I took my time, because I found important information in the process.

This homework given by professor @imagen covers several important topics in the crypto world. We learnt the meaning of dominance which indicates the proportion of a coin's market cap to other coins in the crypto market.

It was discovered that Bitcoin is the dominant currency in the crypto market with a 42.94% dominance at the time of this writing. The fluctuations in the prices of cryptocurrencies was also discussed.

Additionally, we saw how positive news can cause an increase in the prices of cryptos and how negative news make the crypto prices fall.