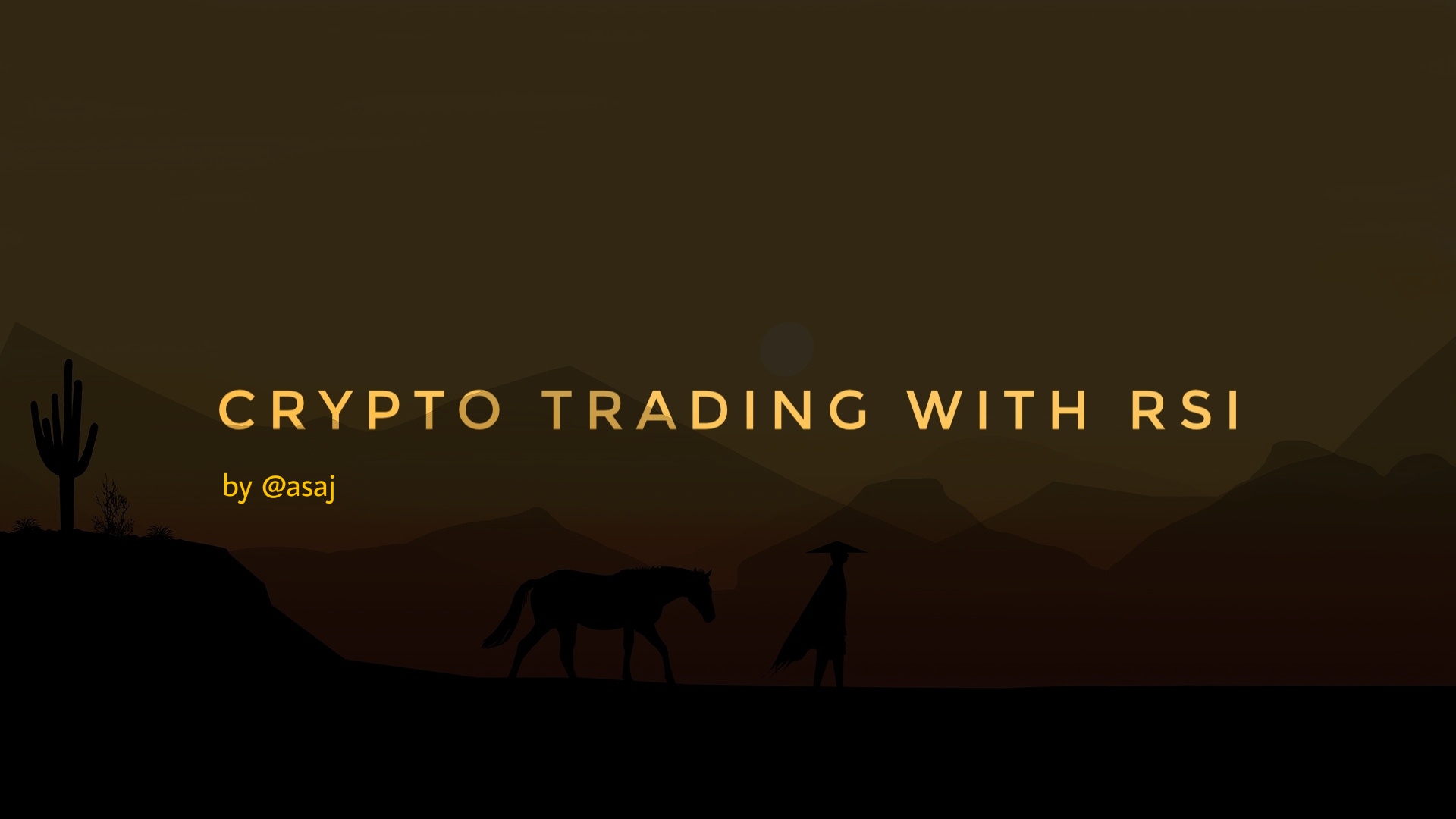 Imagine you embark on a journey to retrieve a treasure from a place you've never been. All you were told was that the treasure is buried somewhere in Mojave desert.

The chances of finding this treasure would be painfully low because you do not have a guide or a map. In fact, embarking on that journey without a map or a guide would be insane and extremely dangerous.

Additionally, note that the chances of finding the treasure also depends on your ability to read a map if all you brought one along. Same applies to cryptocurrency.

There are several hidden treasures in the cryptocurrency market. That said, you can't just embark on a trade without having a map or being able to interpret one. The chart of a crypto asset is likened to a map. Your ability read it depends on how skillful you are in using several analytical techniques and how well you understand key indicators.

This week's task focuses on an essential indicator; Relative Strength Index (RSI). What is RSI? How does it work? How do we interpret RSI? These questions and more will answered in this post.

Relative Strength Index (RSI) is a technical indicator that measures the upward and downward movements of the price of an asset during a given moment of time. Since it measures price movements (or swinging in rhythm) across a given time frame, it falls within the category of indicators called the momentum indicators or oscillators.

There are two other major categories of indicators, which are known as the volume indicators and trend indicators.

J. Welles Wilder, a mechanical engineer who later became a technical analyst, developed this indicator in 1987. Four years later, he released a book called The Delta Phenomenon Or The Hidden Order in All Markets. Sadly, on the 18th of last month, he passed on.

He is regarded as the father of many indicators, including the Average True Range, Average Directional Index, Parabolic SAR and many more. He may no longer be among us, but his works live on.

How to Calculate RSI

The formular for RSI is;

The formular for RS is;

When average gain is higher than aveverage loss within a specific peri, RSI will be higher than 50. Thus, if RSI rises to values within 70 and 100, it shows that the asset is being overbought.

If average gain is lesser than averagege loss during a particular time frame, RSI will be less than 50. Thefore, if RSI falllls below 30, ishows that the asset is being oversold.

On Binance, the specific period is set at 6 by default; even so, you can increase to o 14 or 24. Traditionally, it is set at 14 by default.


The Relative Strength Index (RSI) can assist traders to make good investment decisions. It can also help technical analysts to interpret the mamarket. That said, it should not be used one, because it somemetimes gives false signals.

Cryptocurrency trading with RSI alone is like finding the buried treasure with latitude coordinates alone. It simply isn't enough.

Hence, iis advisable to use the Relative Strength Index (RSI) alongside other analytical techniques and indicators; such as, Parabolic SAR, MACD, and other stochastic indicatotors.

* Select a trade pa. In this example, I have selected BZRX/USDT pair

* Tap on the chart icon

How to Configure RSI on Binance 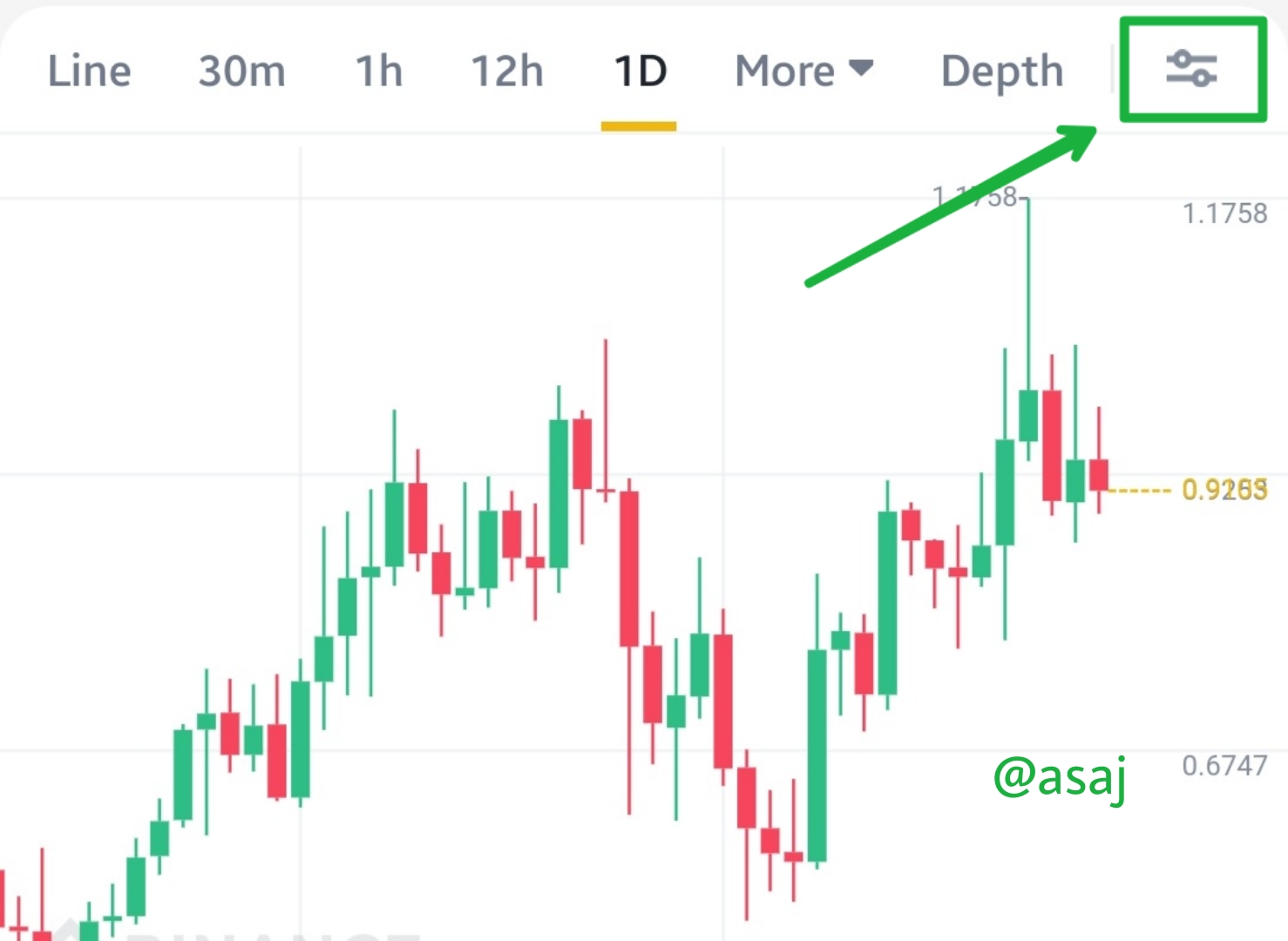 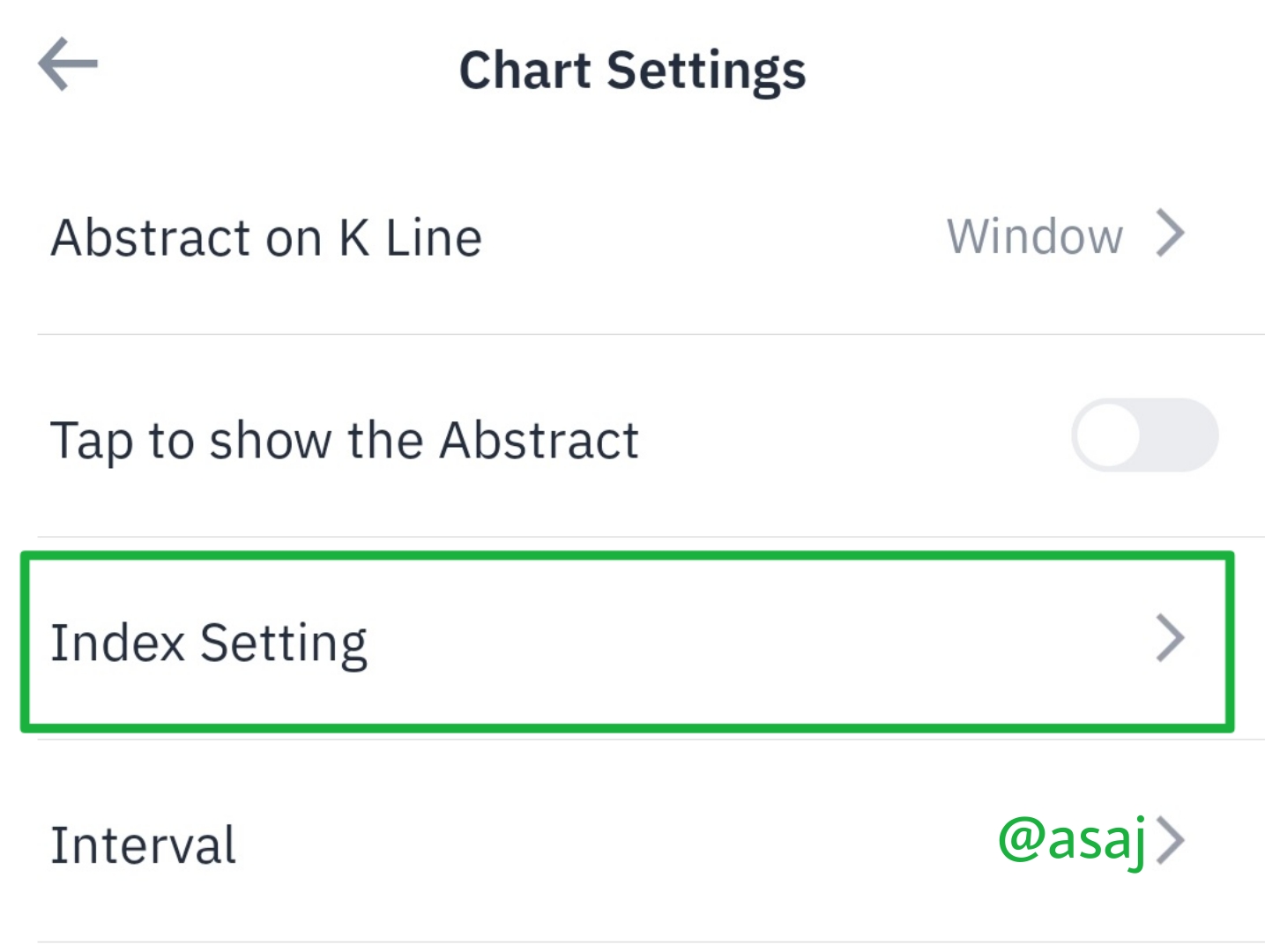 * Press the [RSI] option from the sub category 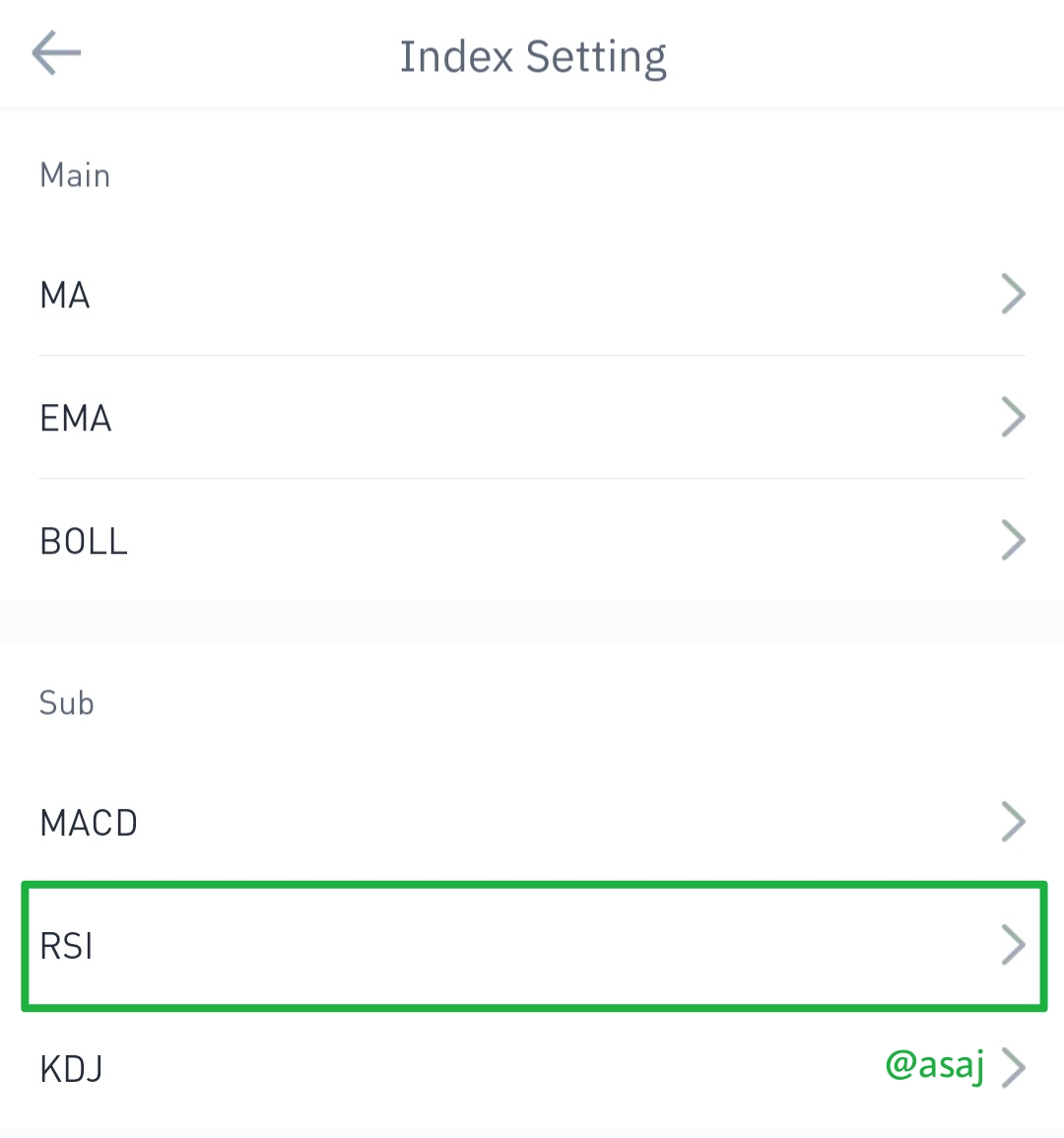 * Tick the RSI2 box to change the RSI period to 14 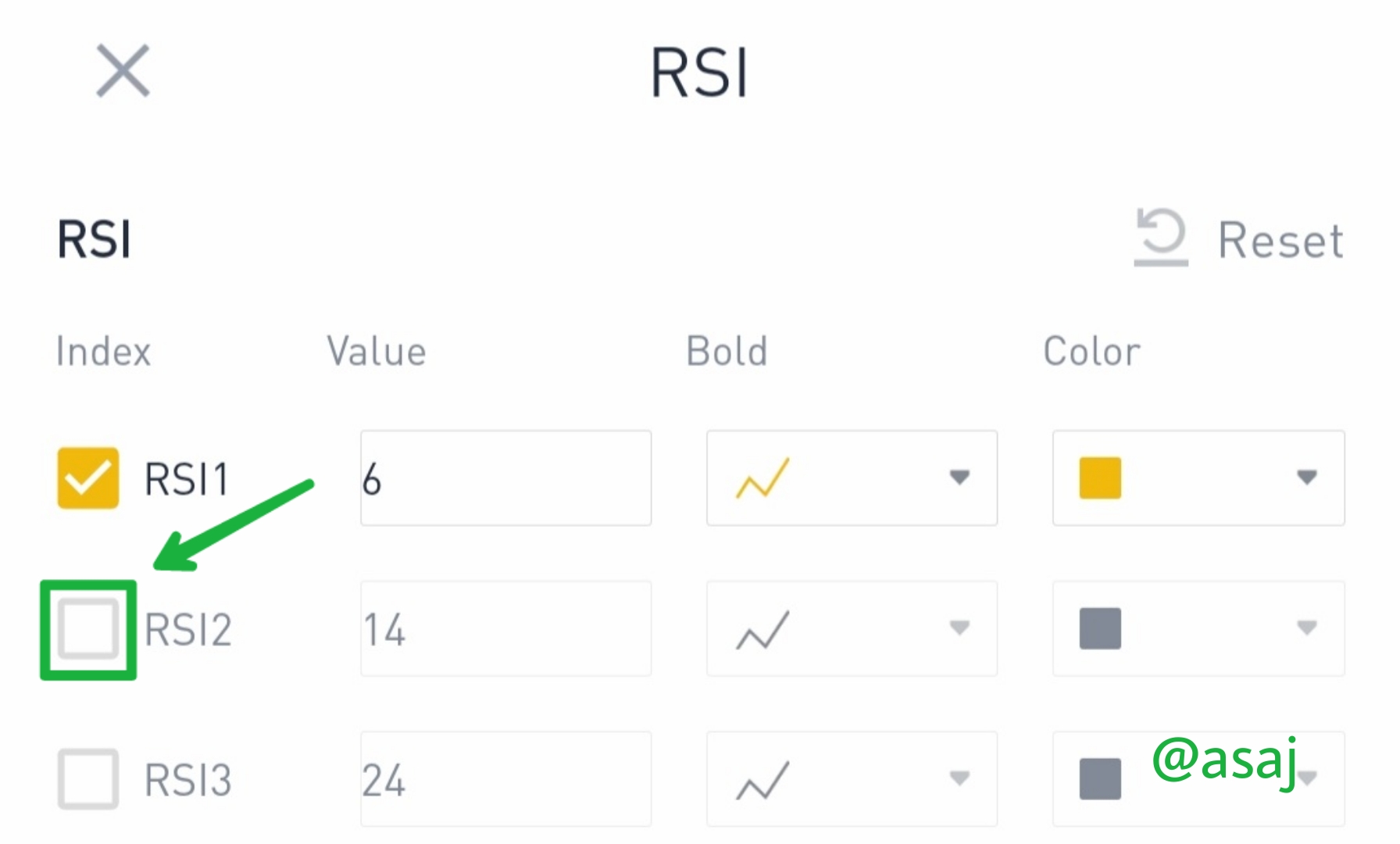 * Pick a chart line and colour 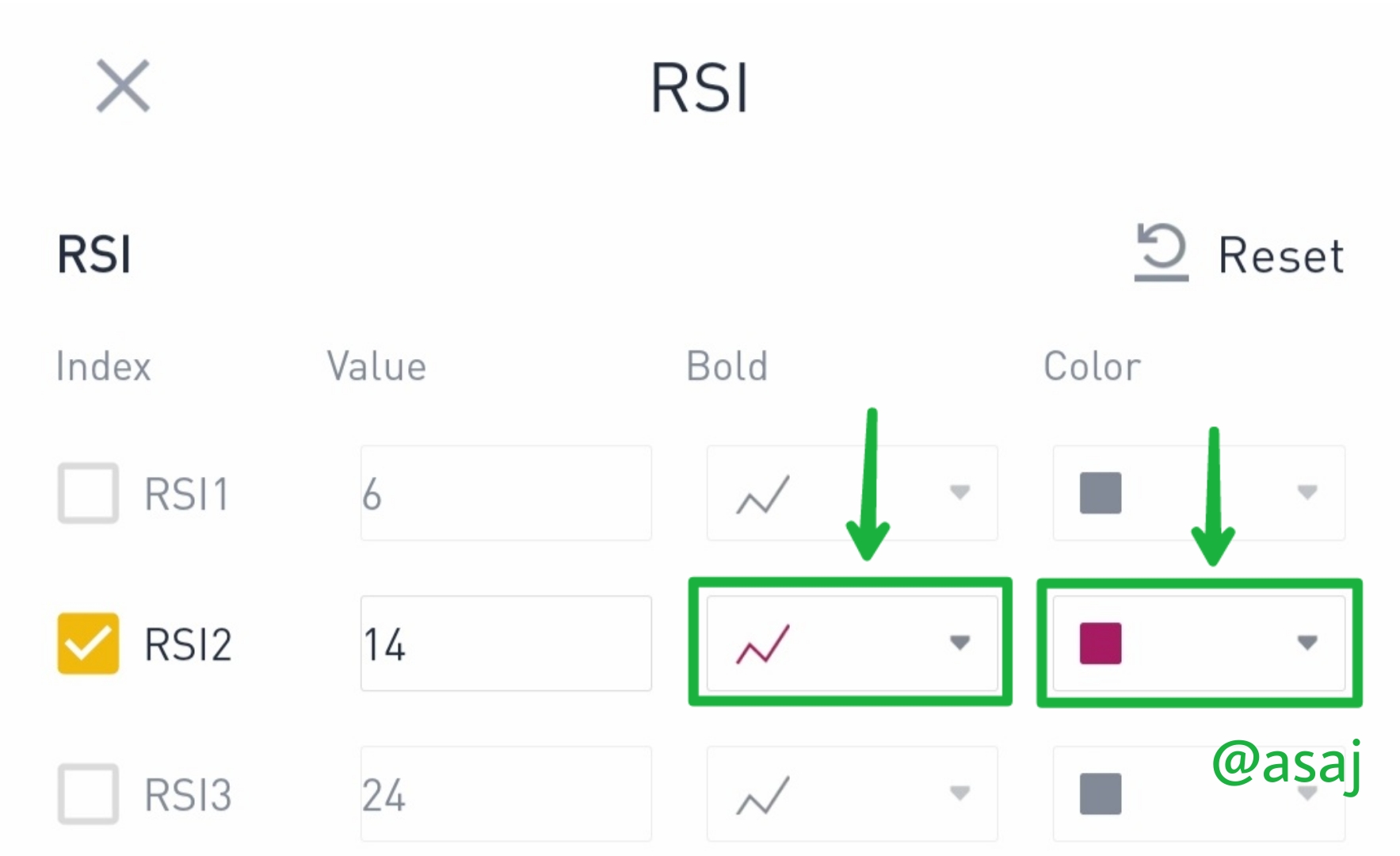 * Now we can see the configured RSI movement with red lines

Why RSI is Often Set at 14 by Default

When J. Welles Wilder developed Relative Strength Index (RSI) in 1987, he recommended that the given period should be set at 14. Fourteen time period means it can be 14 weeks, 14 days, 14 hours and more.

However, Binance uses a default of 6, but traders have an option to increase it to 14 and 24.

The Interpretation of Overbought and Oversold

An asset is said to be overbought when the value of the RSI goes beyond d the 70 mark. This mns that buying havave pushed therice very high, and as a a result, a priceull-back is expected to occur. A price pull-back often occurs soon after an asset is overbought, then the asset experiences a drastic fall in price.

The chart above shows SWIPE was overbrbought at the binning of February and this led to an increase in the price of SWIPE. However, on Februruary 15, a priceull-backck occured and we e ththe price fall to point A.
en an asset is overbought, there are usually more buyers than sellers in the mamarket. Later on, the market will experience a correction. 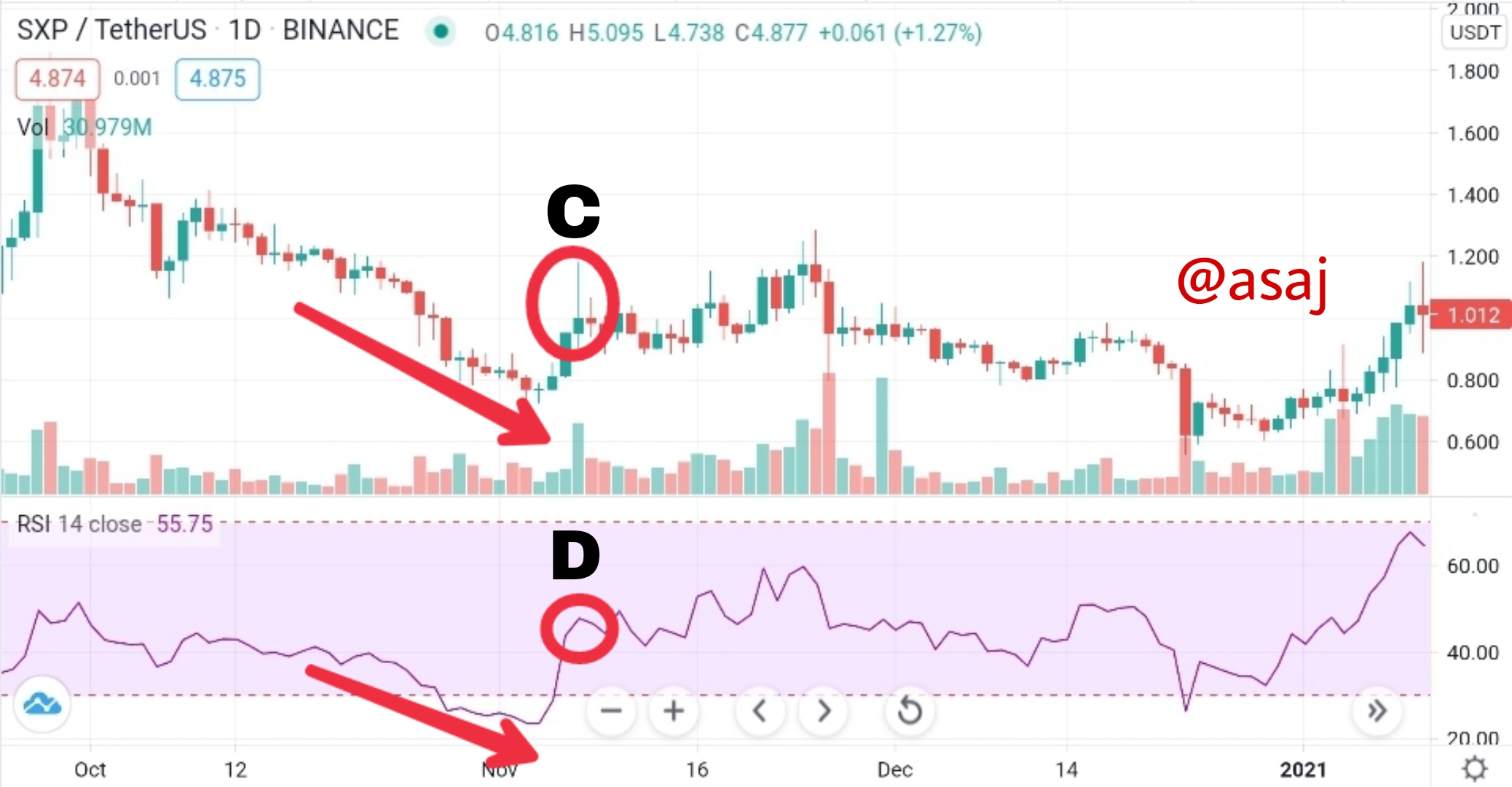 The graph indicates that SWIPE (SXP) was oversold in November. As a result, we see the price of SWIPE fall as well. Also, the RSI goes below the 30 mark, but as expected the RSI of SWIPE rises quickly from the oversold d region. Thereafter, the price bounced to point C. We seehthe RSI value risas well i in point D.

Wean, therefore, sayay that there we more sellers of SWIPE thahan buyers on the 1st of Novbeer 2020. Few days later, a market correction occured.

How to Filter RSI Signals

There are situations when RSI ccan give confusig signals. For instance, when there is a bullish divergence or a bearish divergence.

A bearish divergence occurs when there is a significant drop in the value of RSI, however, the candlelight chart pattern does not indicate a corresponding drop iin price.

In the chart above, we observe LTC/USDT pair experience a drastic drop in tthe RSI value. Hoever, the candlelight chart pattern does not indicate a similar drop in price. This is known as a bearish divergence.

With that said, I can usse a volume indcator to filter the noise of RSI as indicated below; 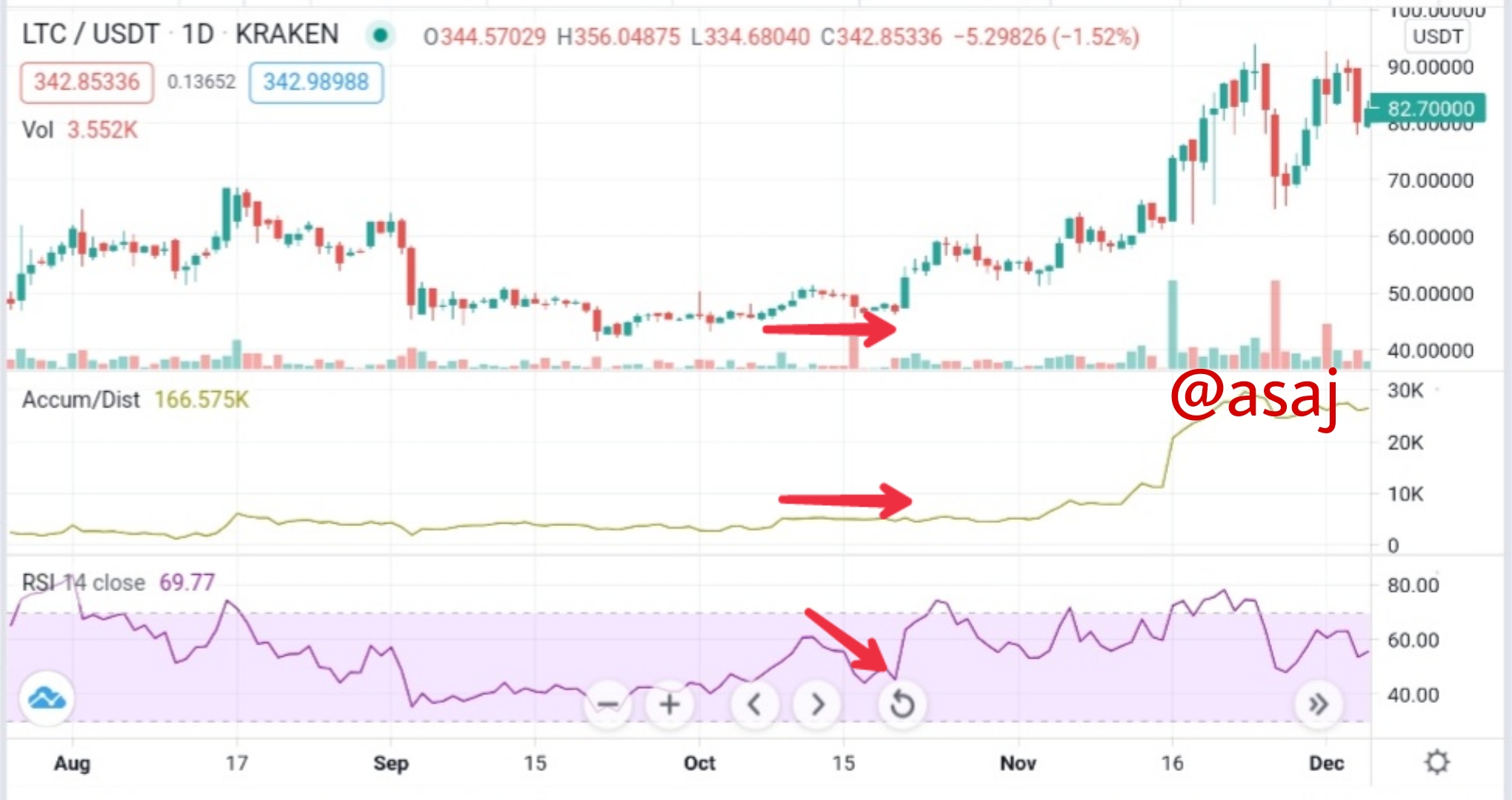 In the chart above I have addded Accumulation Distribution Indicator (AD) to thesame chart of LTC/USDDT pair. AD measures the inflow and outflow of money from the investment in an asset. It can e obbserved that the AD value has maintained a fairly consistent level beow 10k. Thus, the AD has helped me to filter the noise of RSI.

If the AD line had followed the RSI downtrend, it would have confirmed that there are more sellers than buyers in this trade and the price of LTC would have succumbed to the selling pressure, and thereby fall later on.
A fairly straight horizontal AD line indicates that the volume of salles and purchases are atequilibrium. In other words, they are cancelling out each other almost equually.

While RSI tracks minor changes, AD tracks the overall changes in sales and purchases of a given asset.

I have chosen a BZRX/USDT pair to analyse as shown below: 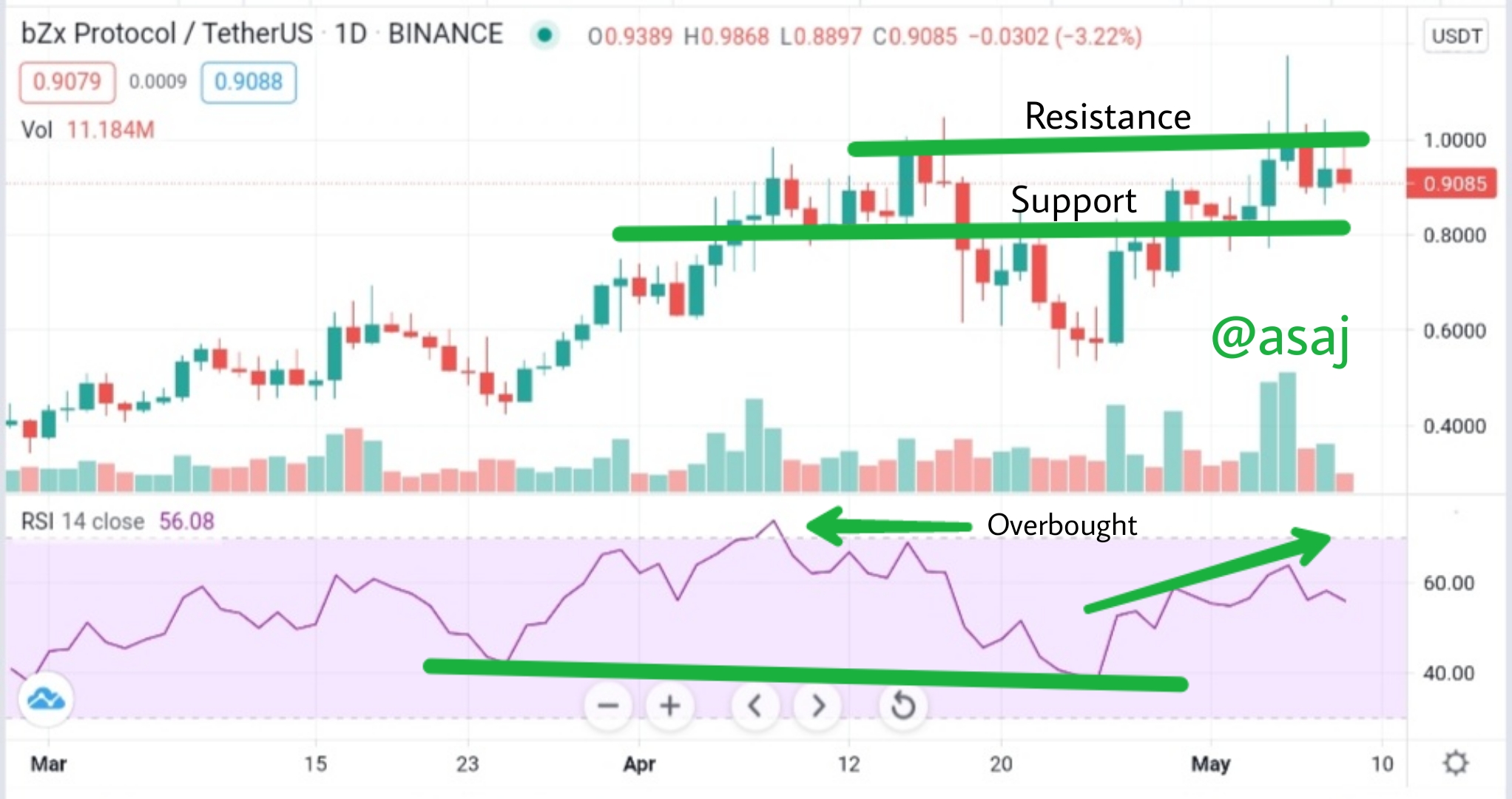 Candlelight Pattern Analysis
From the chart above we can see that BZRX/USDT has met a resistance at $1 price level in two occasions. In the second instance, BRZX broke the resistance and then fell a little. It is yet to touch the support level at $0.8.

This is a good time to buy because BZRX have aa tendency of turnig resistance level to support level. I predict tthat BZRX will rech the $1.2 price within the next onne week. Let's find out if RSI agrees with my forecast.

It is observed from RSI values that BZRX have not be oversold during the period of analysis, in fact, it barely touch the 40 RSI value. This indicates that traders are holding on to their positions. Also, it reflects buyers confidence in the coin's ability to maintain a high value. At one instance they even overbought.

In addition to that, it is observed that there are more buyers than sellers in the BRZX/USDT trade and there is a strong tendency for BRZX to be overbought again.
Therefore, the price of BRZX is about to experience a rise. This is in agreement with my candlelight pattern analysis.

In summary, we have learnt that RSI is an important indicator in the analysis of the value of an asset. Despite this fact, it is not advisable to rely on RSI alone. Other stochastic indicators should be used aoongside with RSI becase RSI can give false signals at times.

Professor @kouba01 lecture and task has been very informative and useful to me. Doing this homework broaden my knowledge about Relative Strength Index (RSI) aand Amulation Distribution Indicator (AD).

About finding the buried treasure, obtaining the GPS longitude and latitude coordinates will definitely be the best bet. I wish you success in your endeavour.

>
NB:
Screenshots are from Binance and TradingView.Cover image created by me on Snapseed.
kouba-s2week4cryptoacademyrsitradingsmi

kouba01
Hello @asaj,
Thank you for participating in the 4th Week Crypto Course in its second season and for your efforts to complete the suggested tasks, you deserve a 10/10 rating, according to the following scale:
Originality

An excellent article showing that you took the time to understand all aspects of the RSI enabling you to answer all questions clearly and precisely.

Thanks again for your effort, and we look forward to reading your next work.
Sincerely,@kouba01

Thank you @kouba01 for taking the time to read my work and for appreciating the effort I invested into this work, means a lot to me. I wish you comfort in your work.

You have explained very well about Crypto currency, I have received a lot of knowledge and if I have any problem, I will tag you inshaAllah.