Since Bill Richardson was named as one of the child predators in the unsealed case of Giuffre vs Ghislaine Maxwell, isn't it time people look at all he has done? 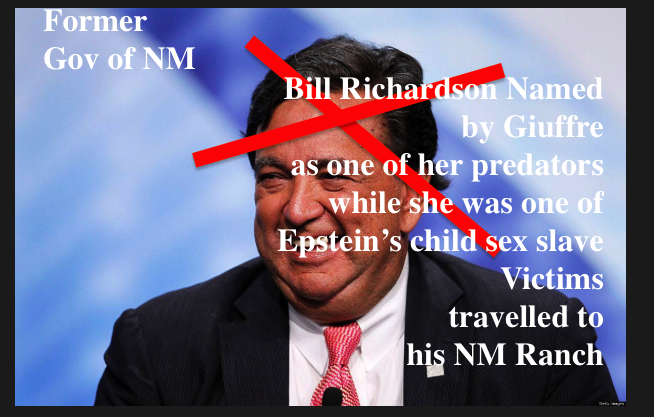 As many of you are aware, Bill Richardson, former governor of New Mexico was named in the unsealed case documents in Virginia Roberts Giuffre vs Ghislaine Maxwell.

You can find this in the unsealed documents on page 93
Under Agren Blando Court Reporting and Video inc. Case 18-2868

Bill Richardson was born in Pasadena, California.His father, William Blaine Richardson, Jr. (1891-1972), who was of Anglo-American and Mexican descent, was an American Citibank executive who grew up in Boston, Massachusetts, and lived and worked in Mexico City.

His mother, María Luisa López-Collada Márquez (1914-2011), was the Mexican-born daughter of a Spanish father from Villaviciosa, Asturias, and a Mexican mother, and had been his father's secretary. Richardson's father was born on a ship heading towards Nicaragua. Just before Bill Richardson was born, his father sent his mother to California to give birth because, as Richardson explained, "My father had a complex about not having been born in the United States."

Richardson, a U.S. citizen by birth, spent his childhood in Mexico City and was raised as a Roman Catholic.

His tenure at the Department of Energy was marred by the Wen Ho Lee nuclear controversy. As told by The New York Times in a special report, a scientist later named as Dr. Lee at the Los Alamos National Laboratory was reported as a suspect who might have given nuclear secrets to the Chinese government. The article mentioned Richardson several times, although he denied in sworn testimony that he was the source or that he made improper disclosures. After being fired and spending nine months in solitary confinement as an alleged security risk, Dr. Lee was later cleared of espionage charges and released with an apology from the judge. Eventually Dr. Lee won a $1.6 million settlement against the federal government and several news outlets including the Times and The Washington Post for the accusation.

Richardson was also criticized by the Senate for his handling of the espionage inquiry, which involved missing computer hard drives containing sensitive data, and for not testifying in front of Congress sooner. Richardson justified his response by saying that he was waiting to uncover more information before speaking to Congress. Republican Senators called for Richardson's resignation while both parties criticized his role in the incident, and the scandal ended Richardson's hope of being named as Al Gore's running mate for the 2000 presidential election.

Richardson Integral in the creation of NNSA (National Nuclear Security Administration) which was the forerunner of DHS.

Somebody Sure liked Richardson

In 2000, Bill Richardson was awarded a United States Institute of Peace Senior Fellowship. He spent the next year researching and writing on the negotiations with North Korea and the energy dimensions of U.S. relations. In 2011, Richardson was named a senior fellow at the Baker Institute of Rice University.

He also served on the corporate boards of several energy companies, including Valero Energy Corporation and Diamond Offshore Drilling. He withdrew from these boards after being nominated by the Democratic Party for governor of New Mexico, but retained considerable stock holdings in Valero and Diamond Offshore.

Seems like Lots of conflict of interests with Many in government when you start looking at their history!

He would later sell these stocks during his campaign for President in 2007, saying he was "getting questions" about the propriety of these holdings, especially given his past as energy secretary, and that it had become a distraction.

At the request of the White House, he also flew to North Korea in 2005, and met with another North Korean delegation in 2006. On December 7, 2006, Richardson was named as the Special Envoy for Hemispheric Affairs for the Secretary General of the Organization of American States with the mandate to "promote dialogue on issues of importance to the region, such as immigration and free trade".

Was found to be useful for the NEXIVM gang in trying to find new converts while discussing slave strategies at their "We're bored passed off as "Destination Board Meetings!"

If you're not familiar go here,

https://goldvoice.club/steem/@artistiquejewels/allison-mack-pleads-guilty-to-racketeering-apologized-to-those-exploited-in-nexivm-raniere-s-dos-or-master-of-slave-women-cult
In December 2005, Richardson announced the intention of New Mexico to collaborate with billionaire Richard Branson to

With Eric Schmidt on visit to North Korea

In January 2013, he led a delegation of business leaders, including Google chairman Eric Schmidt, shortly after the state had launched an orbital rocket.

In closing, I just want us all to remember where Isaac Kappy was born and raised. In Albuquerque, New Mexico. A beautiful city with spectacular mountains (Sandia Mountains), but many secrets have been kept to to the Sandia National Laboratory.

Here are some connector articles and reports,

Some dedicated Voat researchers work here. I've been watching the Good ones and they don't get enough credit nor attention on their work. Why this stuff isn't headline news. . .well, we live in satan's domain and he will do all he can with the help of his cohorts to keep it hidden. It must be Revealed! #DarkToLight

Isaac Kappy's Questionable death and all he lived through as a child actor, deaths of Judith Barsi, Heather O'Rourke and the Hollywood Connection