Roommate of Zuckerberg and co-founder of Facebook, Chris Hughes who was Good friends with Pete Buttigieg when they all went to Harvard. How Hughes husband was political director of Freedom to Marry to win recognition of same-sex marriage nationwide? 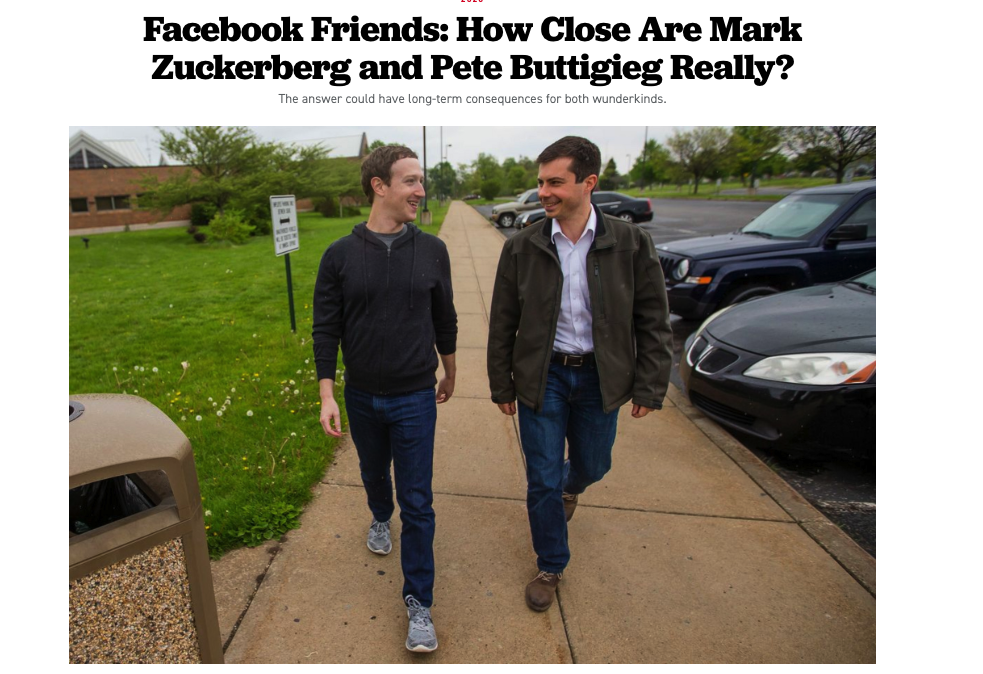 I will put the FB Frames link here, but am archiving because this kind of info has been known to disappear.

You will also be able to read all of this below and will be putting all photos underneath as that is the least time consuming way to do so. These photos Do tell the whole story as they go beyond what was written in my breakdown.

If you are short on time, just flip through the Frame photographs and it tells the whole story!

Many progressives fool themselves into thinking these Elites are grass roots and came out of nowhere, but did you realize Buttigieg was a Rhodes Scholar just as Bill Clinton was?

For example, were you aware Buttigieg has close ties and connections to those who not only worked for FB, but founded it?

ere you aware Zuck’s roommate Chris Hughes was co-founder of FB and good friend of Buttigieg? They both went to Chris Hughe’s wedding together?

Do you know whose campaign Chris Hughes left to work on? Sure you do. ..Obama’s campaign. Do you think there is a reason my posts and other truth teller’s posts are so heavily targeted? Don’t worry, this disappears, it will multiply in so many other forums and platforms Zuck and his bud’s don’t even Realize exist!

Were you aware that Chris Hughes married Sean Eldridge who served as political director of Freedom to Marry, the campaign to win recognition of same-sex marriage nationwide?

Notice how what Progressives Claim they Support isn’t at all what is supported through the Rhodes Scholarship programs as they have been accused of being sexist and racists. But Never Mind you all of that. . .they want to focus on someone supporting a 9 year old being confused about his gender and Pete standing up for bringing children into adult situations.

He attended both Harvard and Oxford which is a Huge Signaling of the cabal. . these progressives who pander after him don’t realize there is a Reason their kiddos weren’t able to get into Harvard. The party that pretends they are about the working people, are Not about the working class At all it turns out!

Established in 1902, making it the first large-scale programme of international scholarship.

Since its creation, controversy has surrounded both its former exclusion of women (thus leading to the establishment of the co-educational Marshall Scholarship), and Rhodes' white supremacist beliefs and legacy of colonialism.. So basically Elitists as progressives put their blinders on and pretend This is Not what is happening!

Includes (though not listing all)

ll ththis means is hand picked by the globalists’ NWregime

was a MaMaltese-American literary scholar and nslator.
erved ed as William R. Kenan Jr. Professor of English at the University of Notre Dame until his retirement in 2017 when he was named professor ritus.

Co-translatlated and coedited the three-volume English tion of Antonio io Gramsci's Prisootebooks with su support from the National Endowment for the anities. Yet AnoAnother Globalisntity!

Antonio Gramsci was an Italian Marxist st philosopher and communist itician. He wrotrote on political theory, sociology and luistics.
uttigieg taught at at New Mexico State University ats Cruces startinting in 1976 and there met Jennifer Anne Montgomery, also a new faculty member.[3] In 1980, they married and also joined the faculty of No Dame.

Buttigiegieg and the Zuck were at Harvard during the same e period as is cs confirmed by an ABC article stating Buttigieg was there in 2002 and other info online stating the Zuck there during 2002-2204.

Zuck reached out via his preferred method of communication—Facebook Messenger—to a fellow Harvard alum who after leaving Cambridge, had eventually returned to his South Benoots and became a successessful local itician.

e gotgot no response. So he turned to an old Harvard dorm-e named Joe Green, asking ng for an introduction.
Green, who lives in Los Angeles where he builds co-living spaces and funds psychedelic research.

You’ll just have to read the Politico article yourself to see the ClePicture. Will be be putting it and other sources. ..even msm sources in comments for verification of What has been Said!

Some weeks later, on a dreary day in April, Zuckerberg and Buttigieg were sitting in the mayor’s Jeep as Zuck fiddled with the Facebook Live video stream. Buttigieg, wearing a too-big bomber jacket, gave his famous guest a tour of the Rust Belt city, gamely describing the city’s revival—how an old Studebaker factory site was being repurposed into a data center, how downtown’s one-way streets had been redesigned to slow city traffic and foster human connection. They stopped for coffee at a pay-it-forward place, and had lunch at a family-owned tavern in a largely Latino, working-class part of the city. One of Zuck’s spokespeople described the pair as “friends” to the local reporters who were there to chronicle this visitation from the world’s most powerful social media executive.

Do you suppose Buttigieg also showed Zuck the info surroing the manhole le murders at the old Studebaker fary site?

ntereeresting it wan April. Wasn’t ’t it April of 2019 Buttigieg decided to run foresident? They sa say the meeting was April 2017, but Zuck, class of 2006, and Buttigieg, class of 2004, overlapped for two years at Harvard. . .

At the time their paths crossed for a few hours in South Bend, Zuckerberg was struggling to defend himself and his company against growing blowback over the 2016 U.S. presidential election. Some wondered if this tour wasn’t laying groundwork for a presidential run of his own. Buttigieg, meanwhile, had only recently fell short in his bid to become chairman of the Democratic National Committee. Hosting the tech luminary was a helpful shot of positive national publicity at a moment when he was beginning to explore his options for wider office.

Now three years later, their relationship is the subject of ramped-up speculation and interest. Zuck is still one of the technology world’s most powerful figures, but his half-trillion-dollar company is facing unprecedented threats, as calls grow to break it apart. And, surprisingly, it’s Buttigieg who has mounted a top-tier presidential campaign.

And suddenly, the connection between Zuck and Buttigieg, as tenuous as it might be, matters for both men—and for the country. Politically, beating up on tech firms has become a winning populist move. But tech leaders can still be powerful and wealthy allies—and in an election stuffed with aging Boomers, there’s also appeal in the idea of a digital-native leader who can bring tech giants to the table and speak to them in their own laage.
Buttigiegieg has drawn considerable financial support from Silin Valley for hisis White House bid, and Zuck and his wife drew headlines when they recommended staffers to the campaign.

Also according to Politico,

Sean Savett, the Buttigieg campaign spokesn, said Zuckerbeberg and Chan reached out to the campaign to recommend the staffers—one a data scientist from Facebook, one an Indiana native from their Chan-Zuckerberg Initiative—after they expressed interest in working for ttigieg. “That’s’s a pretty standard thing—you know, if you want to work for a campaign, you try to use all of the levers and networks that are poible.”

If you flip through the frames, you will also see the ties of yet another FB co-founder Edwardo Saverin, who has ran the AI side for Monsanto.

What If A City Has To Rethink Its Past to Understand its Future? | Mayor Pete Buttigieg | TEDxUND