QAnon team credited in the Daily Mail for doing research on Epstein, his island and pedogate abuses prior to the Miami Herald 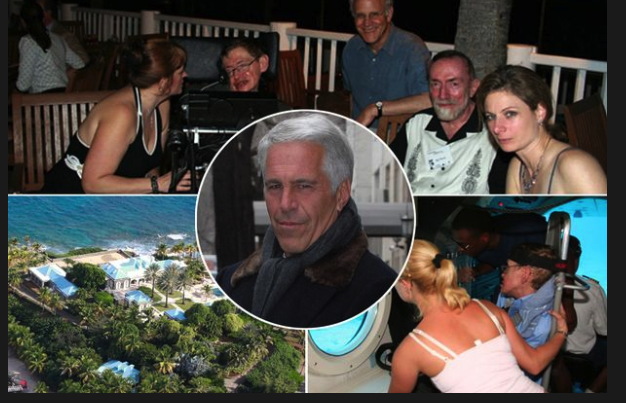 QTeam is a main bullet point in the daily mail! Way to Go #BandOfAnons, #GuardiansOfChildren, #WeThePeople

This was the bullet point
The temple has been of great interest to members of the QAnon community, who had been talking about the island long before Epstein's current arrest

It SURE has! Don't underestimate what a group of people dedicated to saving children from SRA can do! Our God is POWERFUL!

Here is some of what is mentioned in the article,

The arrest of Jeffrey Epstein on federal sex trafficking charges earlier this month has turned his two properties off the coast of St Thomas into ghost islands.

New drone footage and photography shows the state of the islands, including the massive amounts of development over on Great St. James and his shockingly bare temple on Little St. James.

It is unclear where the dome may be, but there were local reports back in 2017 that it had been blown off the temple when Hurricane Irma hit the region.

One local told DailyMail.com that they were under the impression that Epstein had his staff remove the dome ahead of the hurricane.

Irma, which was a Category 5 storm when it made landfall on the island, is still the most powerful hurricane to ever hit the Atlantic region.

The dome never went back up however and now the temple sits unadorned and striped on the island.

The temple has been of great interest to members of the QAnon community, who had been talking about the island long before Epstein's current arrest or Julie Brown's explosive expose in The Miami Herald.

Many members of the community believe that Epstein hid young girls he allegedly enslaved in underground rooms below the temple and other parts of the island.

There is no concrete evidence to support that claim, but the community's belief that a famous actress was recruiting young victims for Epstein is not completely implausible.

A number of Epstein victims did in fact go on to become actresses Brown told Alec Baldwin in an interview back in April.

Epstein doubled his property holdings in January 2016 when he paid $18 million for Great St James a few years back.

That barge and a few completed structures, as well as construction equipment, are visible in aerial images of the island.

This work has been done despite the fact that only the construction of a flagpole and repair of cisterns has been approved on the island.

And yet next door, his temple remains domeless.

Epstein has erected 'No Trespassing' signs throughout around almost all of Great St. James due to the area's popularity with tourists.

Local laws make all land below the tide or bush lines public property, so Epstein cannot legally kick people off those lands, but he is being vigilant about making sure no one wanders onto his property.

He continues to make Little St. James his primary residence, but last month the helicopter that shuttles the millionaire and his guests to and from the airport was listed for sale online, with an asking price of $1.8 million

Epstein also sold one of his private jets in June. His other was seized when he was arrested earlier this month after landing back on US soil following three-week trip to Paris.

In total, Epstein's properties are valued at close to $150 million.

There is the Paris bolthole where he spent the weeks before returning to the US and getting arrested on the tarmac as his plane touched down at Teterboro Airport in New Jersey.

The $9 million pied-a-terre is located on one of the nicest blocks in the City of Lights, and Epstein traveled there frequently, often spending a few months at the apartment each summer.

It was only 7,500 acres when he purchased the property, but Epstein has added to the ranch over the years.

There is also a possible ski chalet that Epstein owns, with records obtained by DailyMail.com showing that a $22 million home in Vail, Colorado was added to his portfolio back in 1997.

It was transferred to him back in 1998 by Libet Johnson, the late heiress to the Johnson & Johnson fortune, who passed away in 2017.

Johnson's name remained on the deed however, and she listed both herself and Epstein as living at the same address on Madison Avenue.

It is still listed as being owned by the late heiress' trust.

The sale of his $77 million Manhattan mansion also happened under mysterious circumstances, which public records showing no transfer of money when he was deeded the house from his good friend Leslie Wexner.

Scroll down in this next article link about halfway to see the direct info on Leslie Wexner and evidence of this magazine.

Photos like this. . .and this is a tame one. Remember not for college age kids (I don't think this is appropriate for them. . .but marketed towards Pre-Teens. . .CHILDREN).

Obvious pedophilia normalization like this, end was cut off but it said Student.

Source for entire magazine here as I didn't want to promote these nude photos on here.

There was however a transfer of close to $50 million to a Wexner charitable fund from businesses registered to Epstein's addresses.

This is the home where a search uncovered nude photos, discs with images of minors and Epstein's infamous massage table.

It is known as the Herbert N. Straus House, named after its former owner who was one of the heir's to the Macy's fortune, the department store which was founded by his parents.

Another department store magnate, Leslie Wexner of Limited Brands, later bought the property, and then handed it of to his now-estranged friend Epstein.

Finally, there is the $14 million estate in Palm Beach that was purchased in 1990, and where a number of young girls said they were sexually assaulted.

One of the videos,

The Temple up close,

See in some of the footage the way buildings and underground openings are concealed,

Many researches have been at this for some time,

Was there a Fire on Epstein Island to cover more evidence like the dentist cart or earthquake?

Epstein's rise to fame, Who is behind the pedoGate obstruction, Pedophile Satanic Ritual Abusers

Epstein Arrested July 6, 2019 A judge that died connected to his case and Cameron Boyce

What Epstein has Really been up to for decades and helped lay the foundation for the radicals taught to operate on Emotion rather than Logic.

This is what his girlfriend/companion/groomer/fellow pedophile/child raper was involved in and she was Quick to try to pull it all down when Epstein was arrested.

I Did find a photo of Rachel Chandler on Ghislaine's "Non-Profit," Terra Mar and go over the predatory practices of an organization they are connected to here,

It's important to note Miami Herald have stepped up and covered a great deal on Epstein and I have been Very Grateful and quoted them many times.

Very good and detailed post on this subject @artistiquejewels ! Upvoted ! This island is a disgrace and will soon be exposed to the eyes of the world, as will the entire community that were there and would like to have been there ! Its a very big and dirty club ! To Hell with them All ! ThanQ for this great post !