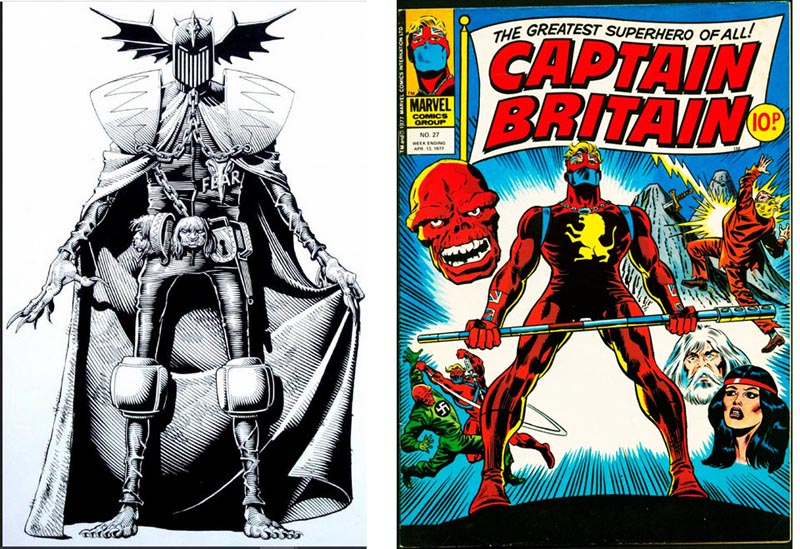 When Last we left I started to show you a commission I was working on...then got distracted by making fun of the deathtrap known as Elon Musk's "cybertruck". If you are a fan of my work...don't ride in the front seat of one of these contraptions, a frontal collision of any meaningful impact will almost certainly spell your death. Before I was a comic book illustrator, I was a mechanic...just don't do it.

Anyways...here was the commission request- Judge Fear and Captain Britain...

The sketch originally had Captain Britain in a newer costume, fighting Judge Death

...but he decided he wanted the old version of Captain Britain vs Judge Fear. Fine by me...it's no more or less challenging. so off I went with the finished pencils...

Impact lines are something I pretty much never do when I'm illustrating. I don't have anything against them, per se. And they are very effective.

I just...I dunno...I feel like it's too jarring for my personal style of visual storytelling. Every single panel I do has some hint of the background in it, and I prefer to not have the figures in a panel absent of that. In real life the background doesn't vanish and get replaced by beams of light when someone gets punched. It feels a little like "breaking the fourth wall", because it is completely admitting/betraying to the reader that this is a comic book not an event.

Just so I'm being clear, and because none of these terms have been written in stone anywhere...an impact line would be different than a "motion line". Look at this page below.

The boxes I put a red border around have what would be "motion lines' they are used to imply motion. Repeated shapes imply motion the the sub-conscious, is why I think illustrators came up with using these. It's an obvious directional signal anyway, even if they weren't being that cerebral when first coming up with this technique.

nd the panels with blue borders around them have "impact lines" they all converge on ...well...an impact, usually a punch or kick or sometimes the point at which something crashes into something else. These are repeated lines, but all converging, which sends a different signal to the sub- conscious.
I dunno...like I say, it doesn't bother me when I see it, and often it is very effective...but there is give an take to using it. and the "take" is breaking the illusion of this being some event happening somewhere because the background and sometimes even part of a character is just completely replaced by them. Know what I mean? The motion lines do this a bit also...as does writing out a sound being made. But words and sounds being written out is going on continually and can happen without leaving out any background.

anyways, Rather than having them all come to one focal point in the picture, I gave it two focal points and winged it in the middle...so it would be a bit less oppressive to the readers eye.

...I guess it turned out alright. I am currently taking on commission. I did BUNCH last year during the Holidays and winter, I won't have as much time this year, but I can do a few. Send me an email if you'd like on douglaspasz - at-- arseniclullabies.com

OH YEAH...the Arsenic Lullaby X-mas Bomb Shelter is up...go there is the holidays start wearing on your nerves https://www.arseniclullabies.com

Congratulations! Your post has been selected as a daily Steemit truffle! It is listed on rank 4 of all contributions awarded today. You can find the TOP DAILY TRUFFLE PICKS HERE.

I think the key thing from a narrative and design perspective is that impact lines aren't obscuring the background – because for one narrative beat nothing in the background is important in that area. The reason that they are effective is that human consciousness focuses on moments of impact, of specific imagery which communicates a single important second, and all else fades away. This is why people are notoriously bad at reporting what has actually gone on around a significant event, because their consciousness is focused at that single beat.

Doing that within a paneled framework makes use of that subjective experience that everyone has had.

So, for example, if we take the Captain America page that you reproduced and highlighted, look at the composition of the panels where significant impacts occur. It's important to note that even if there were no impact lines, the background wouldn't convey any more information than we already have from previous panels. In the first, all that would be there would be the chest of the Leaper. In the second, all that would be there is Captain America crouched and uncoiling. These are things that we already know exist in that narrative; the only thing that's important is first the uppercut and then the Roundhouse. That and the agonized expression that says how effective those impacts are.

It's absolutely true that impact lines are a purely abstract representation, and as such, certain methods of storytelling in graphic art are more suited for using them than others, but seeing them as replacing or leaving out background isn't how they are usually presented. They are, instead, probably better thought of as ways to focus the attention of the viewer on a specific moment for narrative purposes, just like using a shallow depth of field shot in cinema in order to focus the viewer's eye on action that's occurring at a specific point.

All very true and well said. The drifting into abstractness where the impact lines are more of a symbol than an actual visual that we would see is what bothers me about using it in my own work. My stories, to my mind as I am writing/illustrating them are being done in comic book form because that is the medium that is the most readily available to use and distribute in most cases. I don't imagine impact lines being on a cartoon or film, so I don't imagine them when I'm making the story in comic book format.
Having said all that, they are effective when used correctly, and accomplish giving visual information the the reader ( the dramatic force and impact of a given punch or such) in ways nothing else quite could.
There's give and take with any set of techniques you use. If you look at Wally Wood's work on EC comics (I'm gonna assume, by your in depth answer/understanding that you know who he is. if not I can find some examples for ya) He used no abstract devices like impact lines of motion lines, and his work then, while beautiful, was quite boring compared to the excitement in a Jack Kirby page.

And yet, impact lines or a stylistic equivalent are used all the time in cartoons and film. And if you want vast numbers of examples, anything from the 50s to early 70s in American animation, spotlighting and other illumination control in cinema for the entire history of the form, and in Japanese animation from the 50s right up to today. All of them used extremely stylized line work and/or spotlighting (and often at the same time) in order to more directly illustrate narrative beats, particularly those which involve violent, direct action.

Wood's advantage when working with EC comics is that he could depend on the fact that stories were doing a lot of the heavy lifting, often very intensely. There are certainly comics that Wood worked on which he devoted up to 50% of any individual frame to actual text.

In fact, if we really want to talk about Wally Wood's work, we have to talk about "22 Panels That Always Work," and the fact that the majority of them are very explicitly absent detailed backgrounds. They focus on composition and focus, pretty explicitly exclusive of any concern or use of background. While I love his work on Tomb of Horror, it's probably his work on Daredevil, Green Lantern, etc. which is most useful when talking about use of impact lines.

For example, let's look at this page from DD:

Notice that the background literally only exists when it is useful to establish place, motion, and context – and when it would be distracting from the action of the comic, it goes away. In panel one, we establish the location in the context, descending onto a stop light from above on a New York street corner. In panel two, we get the stoplight reframed from panel one, Daredevil in motion described by a kinetic attitude and some motion lines – and nothing else. In panel three the corner of the building comes into play to provide more context for the shifting of our point of view, but also as a place to put the thought balloon, because the building isn't important but space to drop the word bubble is. Then panel for, again we have a loosely sketched building with some light detail to tell us where the camera is, our viewpoint now on the street, but the clear focus of the panel is on the moment of impact, with action lines filling in above because the sky is not important and it provides good contrast with, again, the word balloons.

I love Wood's work in EC Comics, but it's probably not the best guide to visual storytelling that the man produced. Easy Comics themselves had a particular visual style across quite a lot of artists, and largely creating an oppressive sense of more detail than the story is even dumping on you, if that can be imagined, was a good chunk of that.

Now, or representative of the style your thinking is this bit:

There is a ridiculous amount of background detail going on – but look at how much of it is covered up by speech and thought bubbles. It's open and free to do that for the lead were because the backgrounds are not important to convey the narrative and there aren't impact moments which are narrative beats – except for that last panel. And that's illustrative because it has a very clear impact moment and impact lines combined with onomatopoeia and a deliberate simplification of the background to focus the reader's eye on just the thing that's important in the composition. In particular this panel jumps out as very different from the rest because of that clear simplification, even though it's echoing a little bit of the design of the previous panel, probably because he wasn't sure how the letterer was going to expand out that speech bubble above the speaking character's head. In the final panel, there is all kinds of room in visual negative space left for those impact lines.

In a lot of cases it simply comes down to what kind of story are you building, and it's the same kind of question that you ask yourself when you are directing a film scene or putting together any other kind of visual composite. "How can I make this important thing stand out as important to the consumer?"

And after that you can start getting into issues like theme and mood and all the other madness that goes with putting together a story in an experential medium.