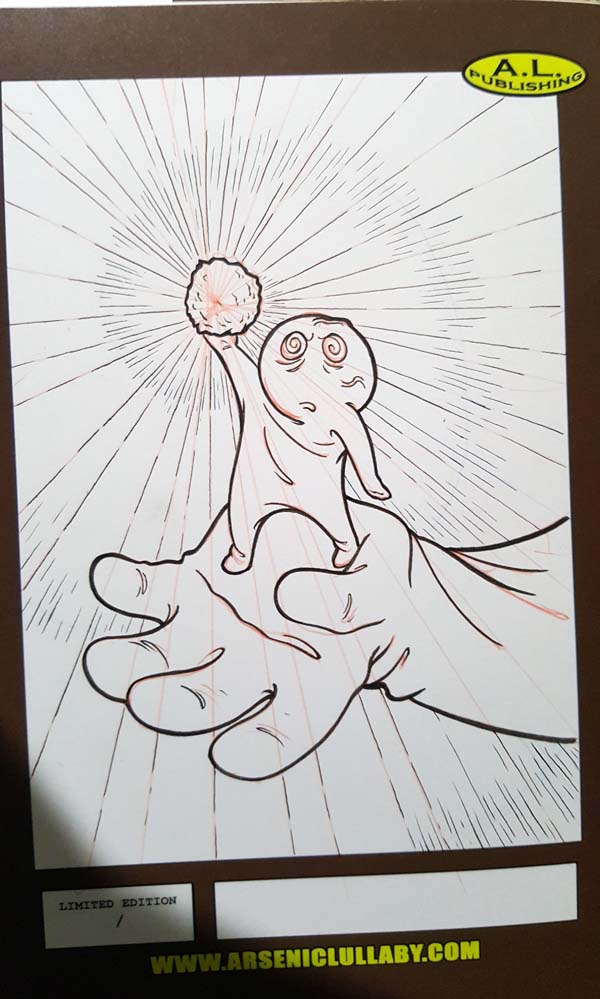 first a reminder, all steemians get 25% off at the Arsenic Lullaby booth! Just ask for me ( Douglas)
We are at Comic-Con International all week - Booth 2200.!

I will be there wens.-sunday doing sketches and signing books, and spreading joy and hope. Mostly the first two things, If I’m being honest. Any joy or hope people get by seeing my is a by product of some character flaw that I don’t need to understand.

BUT...just because I’ll be there all five days doesn’t mean you should get to us first. First off my disposition and good cheer deteriorates quickly when I am in a large crowd of people...or a small crowd...or alone and awake. More important than that for you though is the quality of sketch also deteriorates. I am flesh and blood after all and doing 300-600 sketches over a the course of a week, even if the are mostly simple ones, take it’s toll. Lemme demonstrate the point visually...

If you get to our booth early your sketch could look this good...

If you wait til my hand eye coordination has been pushed past it’s limits, you’re gonna get something more like this...

I did that with my left hand actually but it’s a fair representation. (took a bit of concentration to get it that good.) To be honest...that’s not all that awful for a left handed drawing, but you get the idea, get to me early.

Another reason is Josh Blaylock and Devil’s due have been goodly enough to provide a small amount of the issue/cover of Mercy Sparx I provided the alternative cover illustration for.

It turned out real nice, I think.

(that's not my thumb)

They ain’t set up with a booth this year, sadly, so you’ll have to get them from us and we only have 25.

more info on this series at the Devil's Due website... Here

Another another reason is that I’ll be bringing a big stack of preliminary sketches./screw ups, and everyone who picks up a book can pick one! Until they are gone. Some of these are pretty cool and some are just a scribbled mess with a coffee stain or two on it.

Defiantly a early bird getting the worm situation on that.

Now...if you haven't been to this show before, it can be overwhelming and the convention floor is seven f*cking city blocks long. All you NEED to know is go in door C and look forward and to your right..and you'll see us!

As much as it pains me to consider the possibility...you may after getting all your Arsenic Lullaby stuff, want to see more. So allow me to make a few recommendations ( don't tell them I did this, I prefer to let people think I'm a total jerk)

Michael Kingston is the man behind a wrestling comic book called HEADLOCKED. It good stuff, he works hard to make it good AND get contributions of stories and illustations from actual pro wrestlers...and has a few at his booth signing autographs. That BOOTH 1901

Ian Chase Nichols is another pro who works hard...real hard. He's a skilled illustrator and sharp guy. He's the one who clued me onto "webtoons" ( more on that after the show maybe). He's worked for IDW on TMNT and all sorts of stuff for other people and is currenlty hammering away on an indy booth called Athena. He'll also be doing sketches all weekend. He'll be under the banner of another publisher (...let's just call them "brand X" so I can hold onto some shred of my normal heathy amount of pettiness) at BOOTH 1807

Sara Richard had some all sorts of work for IDW and recently put out a book called The Ghost and The Owl. Her illustrations are really wild and Whimsical, but also very skillfully done. Ian and I have similar styles in the sense that we are both methodical and structured, hers is quite the opposite- loose, flowing, fluid. I find it interesting, and proabably you do as well, to watch different illustrators work. Some are meticulous and cautious and some seemingly reckless and fearless. A sketch from Me, one from Ian and one from Sara will give you a wide range of the spectrum. Sara will be at booth AA21

Last but not least, Bob Burden, the man behind Flaming Carrot comics, and Mystery Men ( yes...the comic the movie was based on). He's an interesting fellow, every bit and offbeat as his books. He has a new work out called "Hitman for the Dead" and he'll be at the Dark Horse BOOTH #2615...sparatically. Last I tallked to him that was basically his game plan- being at the booth sometimes. But in a building as crowded at this one, if you made me guess, I'd say he'd be safely behind the table the majority of the time.

And ...that’s all for now, I gotta go set up the booth. See you at Comic-Con International!

I LOVE the left-handed drawing! (There's a market for that "style" I'd wager!) Also, I met Mr. Burden once back in 1988 at Golden Apple Comics. He was very funny and extremely generous with his time! One of my happiest and most positive "meeting one of my heroes" moments!

I hope the event goes well! Try to have fun!!!!

Bob is a good egg. Talked to him a couple off times over the week, seemed like he was having a good show!

Wish I could be there. I've never been to a comic convention, which I know is a little sad. Maybe you can do one in the UK some time.

That'd be fun...know of any good ones out there?

There are a few here, but I've not been yet. I think the UK #comics scene is growing.

Hey man, my Steem stake sucks, but I was hoping you would start using a couple of tags such as creativecoin / palnet / neoxian so I can reward you MUCH better.

Let us know how the show goes! And yeah, that is a stellar left hand drawing. No way in hell could I do anything that precise with my left hand.