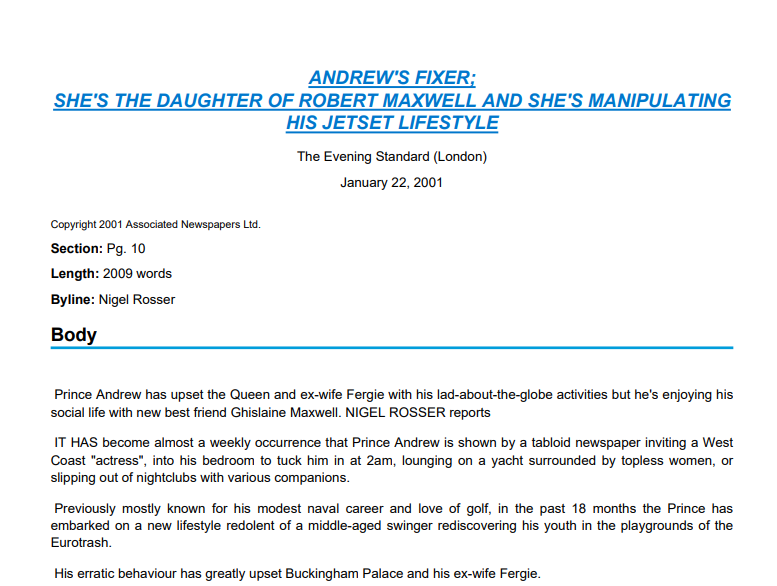 Rt has dug up a London Evening Standard article from January 2001 which has been retrieved by Mint Press. The article can be saved as a PDF and please do save it. While the article concentrates on how naughty Prince Andrew was already by 2001, it offhandedly documents the connection between Ghislaine Maxwell and Jeffrey Epstein to the CIA and to Leslie Wexner and it paints a picture of Prince Andrew being corrupted by Maxwell and provides much to suggest that this process was done with drugs and with underage girls.

Keep in mind that this comes from 2001. Les Wexner was certainly a very key person with the American pro-Israeli community and he still is. He would therefore be the man to cultivate in 2001 for financial and political clout with the American Israel lobby, hence the appearance of Wexner’s friends Epstein, Andrew and Maxwell at Mar a Lago. The Intelligence connection, leave alone the tie-ins with drugs and sex trafficking of minors would not have been on anybody’s radar in 2001. It’s only now that these connections can really be made.

Epstein claimed to be CIA at one point. Maxwell’s father Robert was buried in Israel with full military honours and eulogized as a patriot by Mossad. So I don’t think it’s at all illegitimate to say the connections between Epstein and Maxwell and the CIA and Mossad are beyond dispute. The point being: the CIA/Mossad use drugs and trafficked and abused kids to corrupt the political and financial elite of Britain and America.