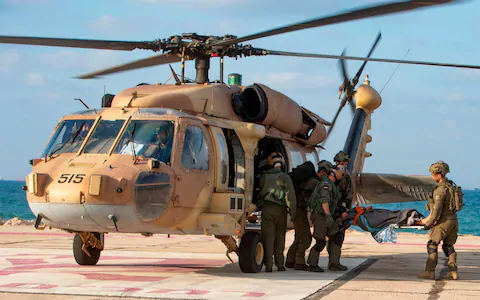 Secretary General of Hezb Allah after watching the low level the once alleged to be the 'invincible army' reached, laughed and called them 'Hollywood Army'.

A member of Quora's network asked this question: Why did Hezbollah's leader Nasrallah call the Israeli army "a Hollywood army"?

I detailed some of history reaching the date of Mr. Nasr Allah's description, I'll copy it here to preserve it from Quora's heavy censorship especially for answers that do not praise Israeli crimes, like my answers in general. So this is what I answered:

There used to be a time when Israel (Read USA, UK, France, Germany, Saudi, Qatar, Turkey, Denmark, Netherlands, and others in their camp) had groups of terrorists in uniforms that threatened and actually invaded and bombed their neighbors using the powers and weapons provided by the aforementioned, then they called themselves the ‘Invincible Army’.

This was mere propaganda as the so called IDF terrorist organization has never fought a real war and won it, only aerial bombings, especially against UN designated shelters housing civilians (Qana 1, Qana 2), then ground troops march into Palestinian camps and start slaughtering the women and children there (Sabra and Shatella…), then film everything to be they’re invincible.

However, whenever there were real ground battles they always lost (Marj Sultan Yacub aka Isareli Tanks Massacre, Wadi Hujjair aka Merkava Tanks Massacre…).

Their propaganda was to intimidate the people they plan to attack and steal their land, this starting the year 2000 was no more the case, in that year Hezb Allah defeated the Israeli entire armed forces and forced them to flee for their lives and liberated most of southern Lebanon. In 2006 Israel carried out a gruesome bombing of Lebanon with the blessings and support and silence of the entire world (including Russia and China if you may) to destroy Hezb Allah and restore their lost reputation, they did manage to bomb a lot of Lebanese infrastructure and on the 34th day of their bombing they were begging the USA to stop the war through the UNSC at Hezb Allah terms, that’s when Hezb Allah started showing their teeth destroyed their pride navy ship live on TV with Hassan Nasr Allah commenting: Look at their ship in the sea, look at it now how it will burn, look how it’s hit and fire started…

The aforementioned Merkava tank massacre was during those days and Hezb Allah started bombing deep inside occupied Palestine.

When everybody started contacting Hezb Allah calling on them to agree for a ceasefire, the chief of Hezb Allah Hassan Nasra Allah said his famous sentence: ‘Israel is weaker than a spider web.’

When Netanyahu was desperate to win the elections, he wanted to show his radical supporters that he can bomb and harm Hezb Allah, not like those who lost the previous confrontations, so he bombed a residence in the town of Aqraba south of Damascus and killed two members of the Hezb resting there, and at the same time sent two suicide booby-trapped drones into Beirut on a failed mission. Hezb Allah vowed to retaliate the killing of its members in Aqraba and told the Israeli IDF terrorists to ‘stand on 1.5 legs’ meaning to stay on full alert, and so they did, for a full week the IDF terrorists vanished deep inside occupied Palestine leaving their barracks and bases, and even the foreign imported settlers of Ivivim colony also ran way.

Netanyahu was begging through all his contacts to pressure Hezb Allah not to retaliate as he will lose the elections (which he lost the majority) and offered military vehicles with dummies for Hezb to bomb instead. Hezb insisted on killing IDF terrorists retaliating the Israeli earlier crime. A chance came when an IDF vehicle carrying troops was sought by Hezb Allah in the Ivivim colony and two members of the Lebanese militia fired Cornet Missiles at it one from the back which fell less than a meter behind the moving vehicle, and the other within a second hit the vehicle from the left side.

Israeli helicopter came to evacuate the casualties, of course you’ll never hear in their media their soldiers ever get killed, but if you listen carefully to their military radio station after few days of any incident they’ll start reporting one or more died of a car crash (like the one killed in the Ivivim operation), or 3 died due to technical error, and so on.

Later that evening and in order to maintain his image, the embattled Israeli PM Netanyahu claimed that non of his forces was even scratched in the Hezb’s operation and that they had soldiers painted with ketchup who were rushed to the hospital in a Hollywoodic scenery.

Therefore, Nasr Allah called them the Hollywood army, only acting, even scripting a lie and filming it. What we know is at least one was killed who was announced two days later to have died from a car crash, and another seriously wounded. Others are Israeli Hasbara.

Arrogance is always a deadly feature for any forces, imagine if it's by a force that sees itself superior over others to the extent its highly trained snipers shoot children under the age of 7 out of fear or when a group of heavily armed terrorists in a heavily guarded barricade shoot unarmed women in her 50s and leave her to bleed to death?

The arab-isreali conflict will, eventually, be resolved. The tide is shifting wherever the resistance is getting supplied with comparable military technology.