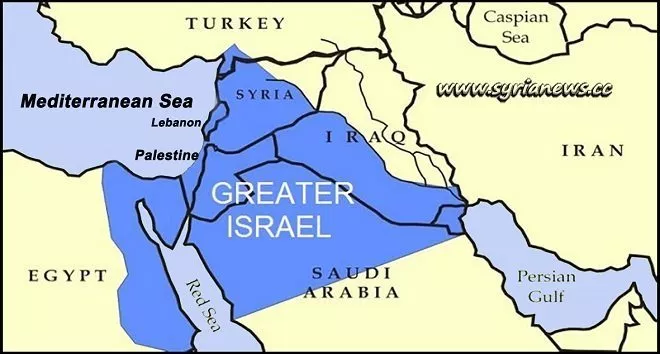 A member on Quora Q & A social wiki platform might be fooled into believing that Israel is a peaceful loving entity, the member asked this question there: Do Israelis support annexing Lebanon?

I was tagged to reply and I answered giving a few examples and a brief background, below is a copy of my full answer there to preserve from the Quora moderators who are very pro-Israel and usually censor any criticism to the last apartheid regime on the planet:

The project behind establishing Israel is to get as much as possible land in order to transfer all Jews around the world into the new to be created state, which is against the very teaching of the Torah, if you may.

In order to accommodate for millions of imported foreign settlers the new to be created state needs land and resources which should include water, agricultural land, minerals, and borders to protect from the original land owners who will continue to try to liberate their land.

The Israelis refuse the two states solution because it confines them within recognized borders within occupied Palestine, that is not enough to fulfill their plan, they invaded Lebanon twice and tried to annex almost half of the country and were forced to withdraw under the non-stop fight the legitimate owners of the land put up until they achieved that in the year 2000 less some land in southeast of Lebanon.

The Israelis stole Sinai peninsula from Egypt and had later to give it in exchange with an obligation by Egypt to protect their southern settlements, the Israelis strength that time based on their manpower wasn’t capable of protecting that large swath of land.

Israelis were occupying Gaza until they were forced to retreat.

The Israelis still occupy the Syrian Golan and tried to annex it but not a single country recognized their illegal act until an orange moron came to power in one country and unilaterally gave them what he doesn’t own and they don’t deserve, nevertheless, that act is still illegal and not recognized and the Syrians will retrieve their land sooner or later and the Israelis will not have a single day of rest until then.

So, in replying to your question: yes, the Israelis support the annexing of Lebanon and any other piece of land they can grab by all means including massacres (Deir Yassin - Sabra and Shatilla - Qana Massacre 1 - Qana Massacre 2), illegal settlements, and by intimidation and deceit. That doesn’t mean the owners of the land they want to steal will let them do that, even if the Israelis fight until the last US soldier alive.

Of course, they basically stole the entire piece of land (Israel) as per real history.

Enough is enough: time for humanity to Boycott Israel to Free Palestine

Oh, and don't buy into any of their "Anti-Semitism" bullshit propaganda either...

Thank you for posting about this @arabisouri.