VR Goggles for livestock and robot dog being used by police? 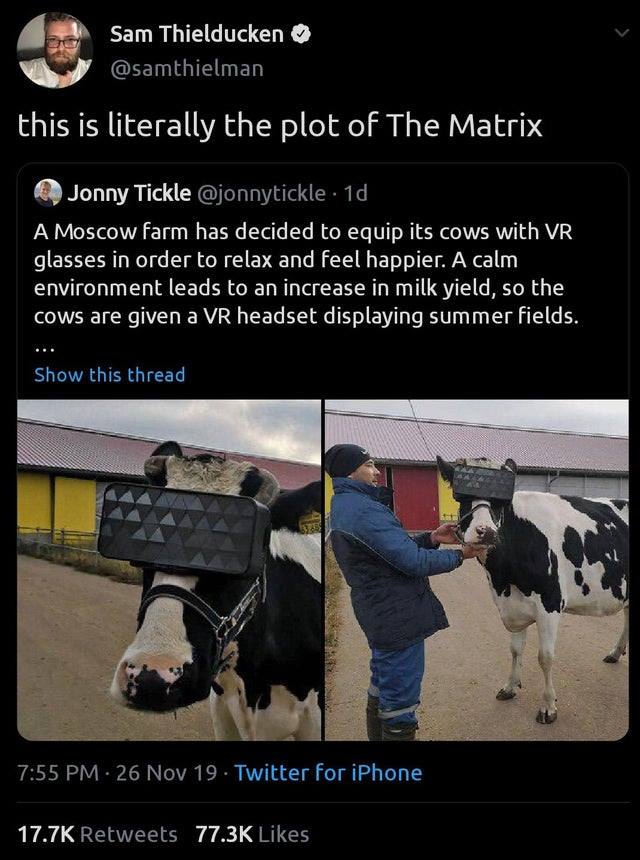 This is disturbing on so many levels.
Also... Makes me wonder... How long till they start doing this to people? And in all reality are people not sort of already doing this to themselves with all their screens and entertainment?

The world can be a terrifying place to try to truly look at and face, especially if you still have a functioning empathetic system... For many it's much easier to just escape to a video game or a movie or a TV show or whatever... :\

(Image does not belong to me I found it on Facebook and sharing in a fair use sense.)

And also... I just saw an article about how it looks like Massachusetts State Police have now been the first to start using a robot named Spot.

It appears to be an evolution of Big Dog if you are familiar with Boston Dynamics and DARPA and what they are doing.
I'm a little mixed on this, but overall it gives me some concerning vibes.

The police already use some robots and they CLAIM this robot will not be used in a weaponized manner to harm people.
I think what's the big deal if they are mostly just being used for bomb disposal and stuff like that? But... I think many if not most of us know that things like this tend to start out small and grow in their use and application over time.

Heck, we have literally had one man who was killed domestically by a police drone already, I think the precedent has been set.
It may take another 20-30 years or however long, but I think you're going to start seeing more and more robots being used by law enforcement.

One reason this is particularly alarming is because this is military technology, they're basically bringing over technology designed for war and using it domestically. Which once again has been happening for a while in various ways but it is still concerning.

I guess I sort of feel like this is a significant part of the foundation being laid for a future even further police slave state.
Law enforcement abuse their power immensely already and they keep arming themselves even more with new military gear to the point our police are basically almost like soldiers.
And then the regular people are just... Mostly at their mercy which is not good.

I think as it seems like it almost always happens the people will almost surely capitulate and they won't prevent the seeds of their future oppression by resisting this.

As harmless as this original robot may seem, this is in my opinion almost certainly a sign of the future.
One day the robot enforcers might be so much more advanced than humans that the people in power will basically seal the deal in regard to their dominion over us.

Times are serious... I can't help but be reminded of movies like Terminator and The Matrix... There's some pretty crazy things happening. I hope humanity is able to move in a better direction and not a worse one when it comes to freedom and love and harmony with each other, nature and the planet.
Anyways...That's it for me for now, peace and bye until next time. 👽

You don't need to force it on people. People already do this VR stuff voluntarily.

Welcome to the 'Technology Age.' Life will evolve one way or anyway, whether you like it or not. What the world will eventually become, who's to know. 😊

The vr headsets are strange and unnatural, but i do like that they are being used for good. If the cows are more relaxed, less stressed and ultimately happier, then that's not necessarily a bad thing. I'm kind of okay with that lol. I'm assuming that they wouldnt leave these on the cow 24/7 but would probably only put them on for an hour or so a day, maybe while the cow if being milked?

The robot dogs really remind me of that black mirror episode where the robots hunt humans.

I wouldn't personally say the goggles are being used for "good"... I'd say they are being used to increase the profit from exploiting the agony of other sentient beings. But most of the other stuff you said I agreed with.