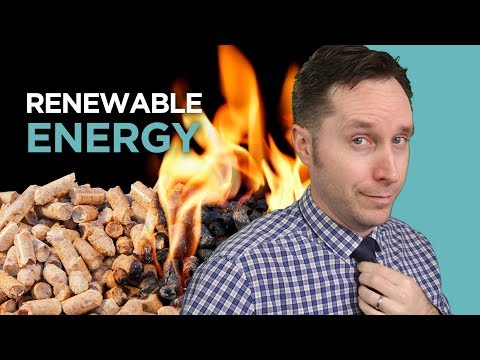 And while burning trees doesn’t sound that green, it is considered carbon neutral because the carbon in the plant matter was already a part of the carbon cycle, whereas fossil fuels release carbon that’s been sequestered in the ground for millions of years.

Now there are a lot of different types of biomass, from incinerators that burn the material to biofuel production that creates diesel for transportation to chemical processes to create usable methane, and they vary widely in their efficiency and sustainability.

So while it’s not the greenest energy source, it is a plentiful fuel that can provide base load electricity for local communities.

Now, if you live by the ocean, you’re familiar with the rhythmic pattern of waves crashing on the beach all day and night. There’s a lot of wave energy out there.

The idea is, the surface of the ocean is constantly bobbing and shifting from ocean waves, why not use that motion to generate energy?

It seems like a great idea. 71% of the world is covered by a constantly moving and oscillating ocean, harnessing that energy seems like a no-brainer.

Except nobody’s really figured it out.

There have been a lot of ideas that have been tested, but none of them have really produced enough to implement on a large scale.

In fact, the most efficient wave energy generators would require 25 kilometers of coastline to produce one gigawatt of energy.

And estimates have placed the worldwide wave energy potential at current technologies at 2 terawatt hours per year.

Staying in the ocean, a much better option is tidal energy.

Even though it does it day in and day out like clockwork, it is considered intermittent because there are lags between the tides going in and out where they’re not producing power.

So they call it intermittent but predictable.

Tidal barrage systems basically build a dam or bridge over the opening to bays and ports where tides rush in twice a day and capture that energy as it passes through the structure, turning turbines in the process.

Tidal stream generators are basically like wind turbines on the sea floor in areas where the moving tide will turn the turbines.

There is however a third type of tidal energy that hasn’t really been put into practice but holds a lot of potential called dynamic tidal power.

For this, we would build enormous 50km long dams that stick straight out from a coastline, forcing the oncoming tide to go through the structure and turn turbines.

This would work especially well in areas where the tide travels parallel with the coastline, such as southeast asia and northern Europe.

There are a few projects in the works to try this out, but this would be a massive engineering project.

The good thing about tidal power is it happens every day and it’ll never stop, and it’s effective even at low speeds.

They also have very long lifespans. The first one was build in La Rance in France in 1966 and it’s still working.

The downside is that it’s expensive, only works in certain areas, and the estimated worldwide potential is only 700 TWh a year. Again, we consume 21,000 so it’s not going to really move the needle.

But it can serve as a supplementary energy resource to the areas that can use it. Whether or not that is enough to spur investments necessary to build more tidal stations, we’ll see.