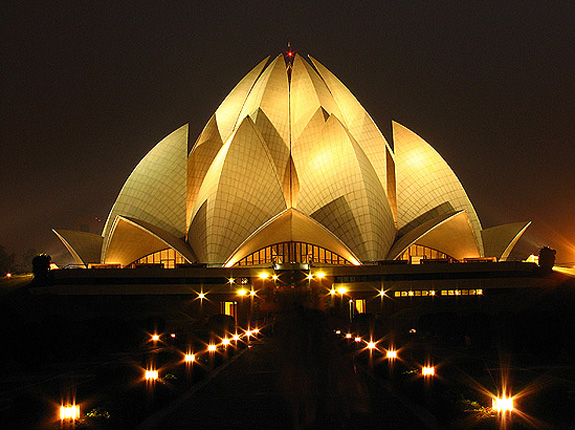 The Lotus Temple was consecrated and opened to the public in December 1986. It was designed by Iranian architect Fariborz Sahba, who won acclaim for the project even before the temple was completed. It subsequently received several awards.

The Lotus Temple derives its name from its design. Like every other Bahāʾī mashriq, it is characterized by a nine-sided construction, in keeping with the Bahāʾī belief in the mystical properties of the number nine. Set on an elevated plinth in a 26-acre (10.5-hectare) expanse of landscaped gardens and surrounded by nine pools bordered by red sandstone walkways, the white marble edifice rises to a height of more than 130 feet (40 metres).

The temple complex comprises 27 independent marble “petals,” which are clustered into groups of three to form nine sides (through which open nine entrances into a central space) and into groups of nine to form three concentric rings. Petals in the first ring face outward, forming canopies over the nine entrances. The second ring covers the outer hall. In the innermost ring, the petals curve inward to partially enclose the central prayer hall, which accommodates about 2,500 people. The top of the structure appears open but actually contains a glass-and-steel roof that admits natural daylight. The overall effect is that of a floating lotus flower on the verge of blooming and surrounded by its leaves.