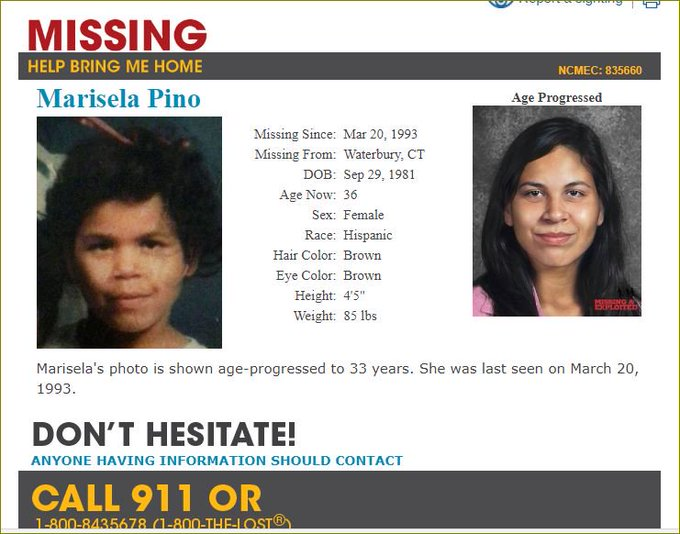 Maria was kidnapped on March 20, 1993, when she was 11-years old from the front of Nash’s Pizza in Waterbury. The girl's kidnappers were involved in a child trafficking ring that provided abductees to wealthy individuals like Trump and Epstein in Manhattan, according to our information. In Donald Trump & Jeffrey Epstein Rape Lawsuit "Maria" identity claimed to be Marisela Pino. She was a 12 year old Hispanic girl. Trump mocked her accent and slapped her according to sworn statements by 2 women.

A woman whom Donald Trump and Jeffrey Epstein allegedly sodomized and raped at the age of 12 along with at least one other underage girl at a midtown Manhattan townhouse in 1994 is alive and trying to maintain obscurity from alt-right operatives who have identified her and her current residence.

Maria was kidnapped on March 20, 1993, when she was 11-years old from the front of Nash’s Pizza in Waterbury. The girl's kidnappers were involved in a child trafficking ring that provided abductees to wealthy individuals like Trump and Epstein in Manhattan.

Please be aware rape case was withdrawn due to threats 11/4/16 Plaintiff had 2 witnesses. Katie & eyewitness stated Maria disappeared & Trump threatened to do SAME to them = kill & said he would harm family members too. Epstein warned them Trump could.

The statement made by Ms. Doe under penalty of perjury: point #9 references "Maria."

Attorney David Boies, who represent Epstein's accusers, Virginia Roberts Giuffre and Sarah Ransome, said, "This is an important step in getting justice for the many victims of the sex trafficking business of Mr. Epstein. We hope that the prosecutors will not stop with Mr. Epstein because many other people have participated with him and made possible the sexual traffic "

Epstein Trial Will Have a Million Pages of Evidence, Lawyers Tell Court

A federal appeals court has ordered the release of sealed court records pertaining to billionaire Jeffrey Epstein’s alleged sex ring spelling a victory for the victims, whose lawyers said the documents will prove Epstein trafficked underage girls to his famous friends.

“We applaud the Second Circuit's decision to unseal the materials in the Guiffre v. Maxwell case. This ruling is a watershed moment that helps victims of sexual abuse. It unequivocally stands for the proposition that information cannot be hidden in court filings and that the public has the right to know about the abuse of victims.”

In any case, no child rapist should be President