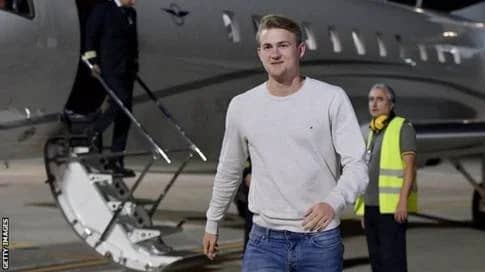 Speculations over the transfer of Dutch wonder kid De Ligt will finally be put to bed as the Netherland defender is set to become a Juventus player next season.

The 21 year old captain of Ajax Amsterdam shone brightly for the Dutch club last season, captaining them to an Eredivise title and also a semi final stage of the Uefa Champions League. De Ligt was the reason star man Ronaldo was unable to play in his fourth consecutive Uefa Champions League final as he leapt high to nod in the goal that sent Juventus packing from the competition in the quarter final.

Fellow compatriot De Jong already became a Barcelona player after he was signed by the Spanish club earlier last season. Rumours arose of a possible follow-up move to the Spanish giants by De Ligt but those rumours will from now henceforth be put to bed.

It is recorded that De Ligt once aired his conversation with superstar Cristiano Ronaldo in which the Portuguese was asking him to join him at Juventus and if that is the major reason the youngster is close to becoming a Juventus player, the Turin club has got their star attacker to thank for gracing them with something they have been lacking in decades, a young and experienced defender.

Juventus has played at the very top for years with an average of 30 years and above aged central defenders and that is one of the reasons they haven’t won an European competition for decades despite coming so close as to playing two finals in three years.

That lack of energy throughout the 90 minutes is one of the breaking points of the Juventus team and what has apparently been hindering them from from succeeding in the competition of “MEN”. Now that De Ligt has landed to add some youthful exuberance and experience to the back of the Old Ladies team, Juventus is sure to make a statement more than they have been doing just like Liverpool FC’s recruitment of Virgil Van Dijk turned a season in their favour.

We will get to see what De Ligt brings to the table for the Turin based club and if he is the one to help them achieve their goal but until then, the fans would bask in the glory of this great buy.