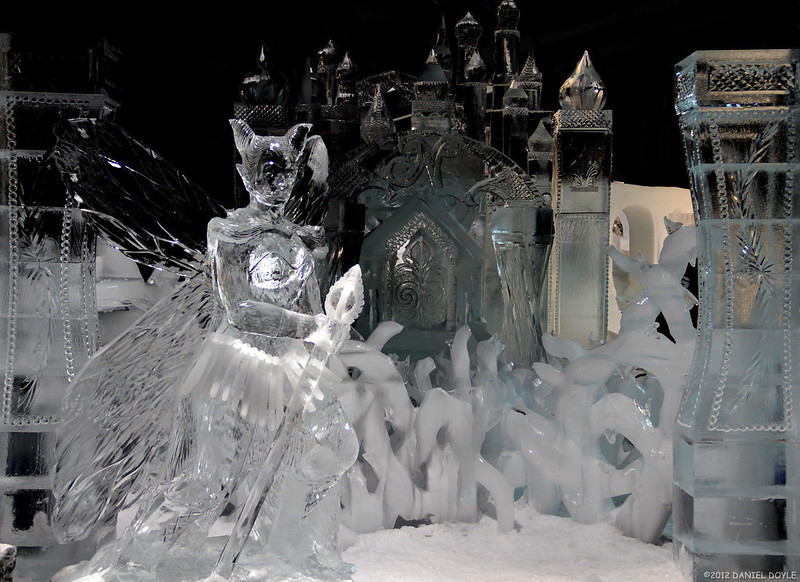 I mentioned at the end of my last post that I had put my back out on the last day of carving the sand sculpture. Luckily I had a few weeks rest after finishing the summer sand season and was sure that by the time the ice season had started I would be shipshape again. But I was wrong, so very wrong. What started as a back injury developed and expanded into full-blown Sciatica and was showing no sign of letting up. I had visited doctors and Physiotherapists but none could help me out of this horrific pain. The best my doctor could do was give me pain killers. I tried them for a while but they hit me like a tonne of bricks, making me feel completely lethargic with a continual haze in my mind. Worst of all they barely took the edge off the pain that was by then travelling all the way down my leg. Feck that, there was no point popping those pills so, I stopped and decided to soldier on in max pain but with max lucidity.

From the frying pan into the freezer

The show had to go on, I had bills and a wedding to pay for and even though I would not be running at my best I signed up for the ice and snow projects that came to me. I would find a way to make it work and not let my client down.

This was my first project as a cripple, It was in Zwolle, Holland and I was happy to be teamed up with Mark Lepire from Canada to create this fairy tale scene of a castle and fairy queen.

Mark is a truck of a man and having his brawn near me helped so much. He built the castle while I was able to work at ground level on the fairy queen. Climbing on a scaffold was not an option in my condition.

I learned so much from watching him work and found his process to be very similar to mine. Not much talking, just doing and having a rough plan that could change till we had the effect we wanted.

I enjoyed making the Fairy, trying to make her as delicate as possible while still making sure she would last as long as the castle. Adding the wings and sceptre helped create a nice layering effect to the scene.

When we had each finished our elements we added white ice thorny roots in front of the castle to create distance and midground between them. Finally, it was on to the ice walls around the entrance to the scene.

Finding ways to work with the pain

I was in agony all the time. I could stand for a few minutes where I would work as fast as I could to do some choice cuts in the ice. Then I would have to sit down till the pain became bearable again. This was my new normal and the cold did not help things improve.

This way of working meant I had to think more about what I was going to do before I did it and in many ways, it made me more economical with my time and energy. I was actually quite happy with what I was able to achieve and that I didn't seem to be a hindrance to Mark or to the project as a whole.

Mark surprised me several times with ideas that I could do in the state I was in and I think we really pulled the whole thing together quite nicely. I was impressed that although he is such a powerhouse of a sculptor he is as at home making delicate filagree as he is at horsing around massive blocks of ice.

Unfortunately, I didn't get photos of the sculpture in its final light as I had to pack my bags and go straight to my next project. I was to get married in January and had to earn as much as I could to have a little nest egg to cover the time I would be taking off. luckily the next project would be a sand sculpture in Sunny Spain. I was happy that I could defrost for a while before I would be back in the cold. Adrenaline would be my drug of choice to get me through these jobs.

WOW! incredible! I never tried... has to be a really hard job

WOW! incredible!
I never tried... has to be
A really hard job