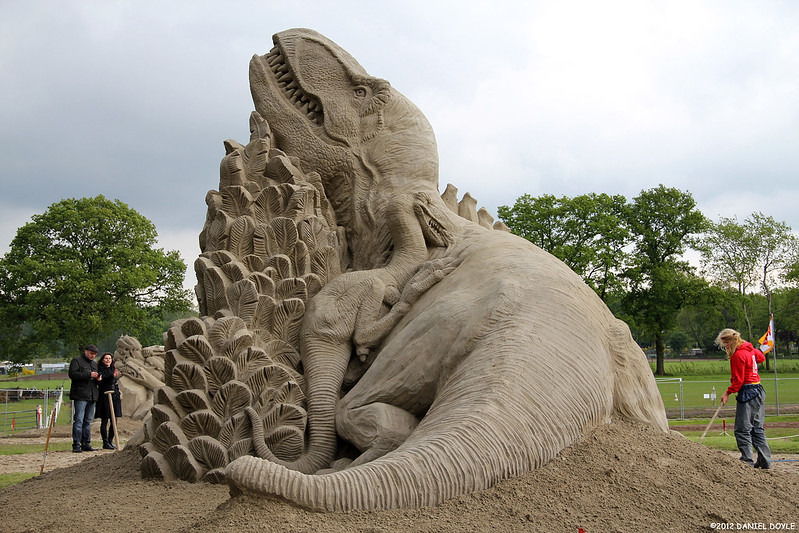 I'm sure I've said this before but my son loves dinosaurs. At five, when I ask him what he wants to be when he grows up he says a dinosaur. I have asked him to clarify if he actually means palaeontologist but no, he insists on Being a dinosaur. I am already looking into colleges for him to attend. So far, no luck in finding him the right course. I am a firm believer in personal freedom to be whatever you want and if he wants to put a D at the end of LGBTQIA who am I to stand in his way. He could end up one day working in Disneyland in one of those costumes, how proud will I be?

I think I have learned more about dinosaurs from him than all the documentaries and books I have read. He knows every one and will make sure I don't confuse my Argentinosaurus with my Parasaurolophussss'. Of course, when I did this sculpture he was still but a twinkle in my eye and my knowledge of dinos was pretty limited. I knew the main ones and that was about it.

I made this particular sculpture in the town if Winterswijk, The Netherlands. Apparently, they had found some Dinosaur fossils in the area and they asked me to make a sculpture of some. I was teamed up with a pretty new sculptor called Marieke van der Meer. She had been carving for a year or so and seemed a bit nervous about working on something so big. It was the biggest piece on the whole project but I was sure that together we could pull it off. Although not knowing her skill level left me a bit concerned. We decided it best that we divide and conquer this block of sand. Work on the same composition of course but, make sure our different styles would not clash but would add to each other.

Getting started in sand sculpture can be a baptism of fire and I was interested to see how she would fare with an entire side of the sculpture to herself. It's sink or swim baby. Of course, I would be on hand if she needed help with anything but I thought it was important for her to find her own way and not have me holding her hand too tightly.

As you can see from what she did, she pulled a blinder. Our idea was to have living dinosaurs on one side and on the other the same scene but fossilised. While I made the living ones she created this amazing skeleton scene. It turned out to be a great way to work for both of us because we get on with our own thing and not be in each other's way.

Marieke has become one of my favourite sculptors as she shows no fear and her work is filled with emotion. A true artist of sand.

My side turned out quite well too but I think I will have to hand it over to my son to give his quick review.

There you have it. He's right you know, velociraptors don't have such a claw. I think I put it in to be a support for his leg but I don't think I really needed it. Or course a bit of photoshopping could sort it out but that would be cheating.

There were several sacrifices to be made by going the direction we did. It led to some ugly angles where the two sides came together but we could live with that. Luckily these were also in directions where the sculpture would be less viewed by the public.

I was pretty happy with how the whole thing turned out, we both were. When working on such a big-bodied animal T-Rex you will inevitably encounter areas of big overhangs. Under the head is an obvious one. So here I added lots of leaves as support, these allowed for the big creature to be a bit more dynamic and create a nice focal point for the Raptor.

Nice work! You just got yourself a $2.57 upvote. Enjoy! Check us out at acom.uno or swing by for a chat at ACOM Discord

Thank you so much Guys