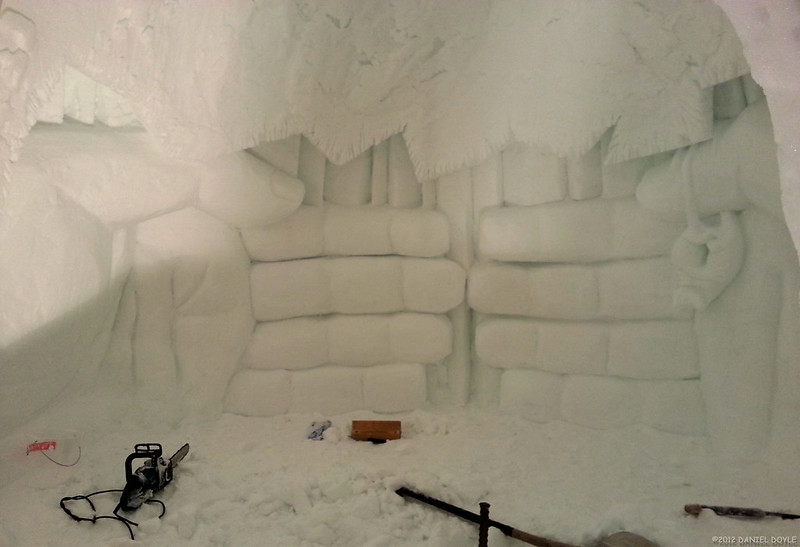 In the last post, I think I gave a good overview of how the Igloo Hotel was made and how I started to learn to work in this new environment. This being my first year I was a bit apprehensive about the work and the responsibility Martijn and I had to make this into an interesting experience for the guests.

Martijn had told me that the standard up to this point was pretty poor and that he had chosen me to help turn it into something quite special and artistic. I was honoured and scared. Unfortunately, there was some sort of sponsorship deal with the movie Ice Age and so we had to create some sculptures to promote the movie but in every area we could, we tried to add our own sense of flair.

The pain, oh the pain!

For me, dealing with my sciatica was a big issue but I tried not to let it stand in the way of me trying to put my stamp on my rooms.

I hate to keep on harping on about my sciatica but I was really in a bad way and fighting the pain was really draining me of energy. and the high altitude was not making it any better.
In the morning on our long walks downhill from the ski lift station to the igloos, every footstep sent sharp pains down my leg. This journey usually involved lots of crawling, it drained my energy levels to 50% and I still had 12 hours to go of physical work. Something had to be done.

After a few days, I found a child's plastic sledge in one of the storerooms and figured I would see if that could make the journey any easier. The next morning I walked to the ski slope and tried to slide down the mountain. I had never used one of these before and know that they are not so for ski slopes but I picked an area of slope that was not too steep. It worked pretty well and I survived but still had a bit of walking to do to reach the igloos. I set myself the mission of trying to find the perfect starting point higher up on the slope that would give me the speed and line to go all the way. It was an exhilarating start the day. Finally, I discovered that if I went to the highest point on the slope it gave me the best option. Travelling at around 56km an hour without control, on a thin piece of plastic I was brought to within 10 meters of the igloo. Quite scary but painless and if anything a nice massage on my arse and back.

The structure of the igloos was really awe-inspiring. It was like being in a big cave of snow with no decerning features. I always felt lost and would walk for ages trying to find my way out also the sound was deafeningly quiet but slowly and surely be started to make landmarks to steer by. The bar was the first room and then we split up to tackle the bedrooms. We each had one day per room. My process was to rough one room out in the morning and then finish the previous days one in the afternoon and into the evening, This way I could use the best of my mental and physical energies. I will apologise here for the image quality of the photographs of the sculptures. Snow is hard to photography and I had to run for the airport the last morning before I had time to make a better shoot.

Let there be light but just a little

It is quite dark in the igloos, you might get a small bit of blue sunlight leaking through the snow during the day but we always had to rely on crappy work lights to do our work and with these, they were too bright, burning out any shadows on the snow so it was difficult to get the best light to carve by. These halogen lamps were also quite warm and if they shun to close to the wall it would melt away the snow in this wonderful texture that I've never seen before. It looked like polar bear fur.
All this messing around with light made it very difficult to work and photograph by.

We used the idea of simple snow lines to give the appearance of ice and snow cliffs and cracks all around the building as a way to unify everything. These forms were mostly done with chainsaw cuts as it was fast and broke up the surface quickly, making it look like we were doing more than we were.

Then in each room we could develop around the theme of the different art forms or if an idea came into our heads we would just go with it. Time was not on our side and we really tried to get the most out of every cut we made in the snow.

The writing's on the wall

I did a room with a typewriter as the headboard to the bed. Running out of time meant that I had to simplify and carve some of our patented cracky surfaces to keep on schedule. Having a detail like this had multiple uses.

The theatre room had happy and sad masks. Simply and iconic. As we carved away snow from the walls this fell down below our feet and made a platform to stand on. This was then cleaned up to form the bed. The bed is actually some pallets and then a mattress on top of this platform. The guests are then given 4 seasons sleeping bags and furs to keep them warm through the night. I mentioned before that the temperature inside is around -2 degrees celsius so not too uncomfortable.

Another room I did had so figures peering through the wall and instead of heads, they had camera lenses. I thought it would be a fun weird idea to give the guests the idea they were being watched. It was pretty weird but once I get an idea into my head I just need to see it done. Strangely they looked like Eskimos which I thought was quite apt. I've always liked experimenting with the idea of voyeurism.

I did go off on a few tangents as I learned how to work with the snow. Trying to make each room an experience. For this room, I made tango dancers in simple silhouettes all around the walls. It is so interesting to try and use the full space if possible but time was always pushing at me to get done and move on and so I simplified where I could.

Of course, we made lots of the Ice Age characters around the hotel but I really hate doing this kind of sculpting and won't include them here. I must have carved Stich and Sid 10 times, pocking out of different corners.

So that was my first time in Iglu-dorf. It was certainly an adventure and one that I was surprised I survived. We coined the term 'Frustrating fun' to describe the project. It was a job that I had to eat, drink and sleep my work. Almost every waking hour for two weeks I was carving and then when I slept I would continue sculpting in my dreams. The Hotel opened on Christmas day and I finished what I could by the 24th of December when I then flew home to Ireland. Martijn stayed on a few weeks to do some other bits and pieces and also do some demonstrations during the day in the Bar for guests.

I'll be back, hopefully with a new back.

I limped home with my sciatica worse than ever and to prepare for my wedding which would be the 12th of January 2013. But that's another story. I was looking forward to going back the next year and creating a whole new Hotel but for now, I had some healing to do and some loving to give to my soon to be wife.

Nice work! You just got yourself a $6.84 upvote. Enjoy! Check us out at acom.uno or swing by for a chat at ACOM Discord