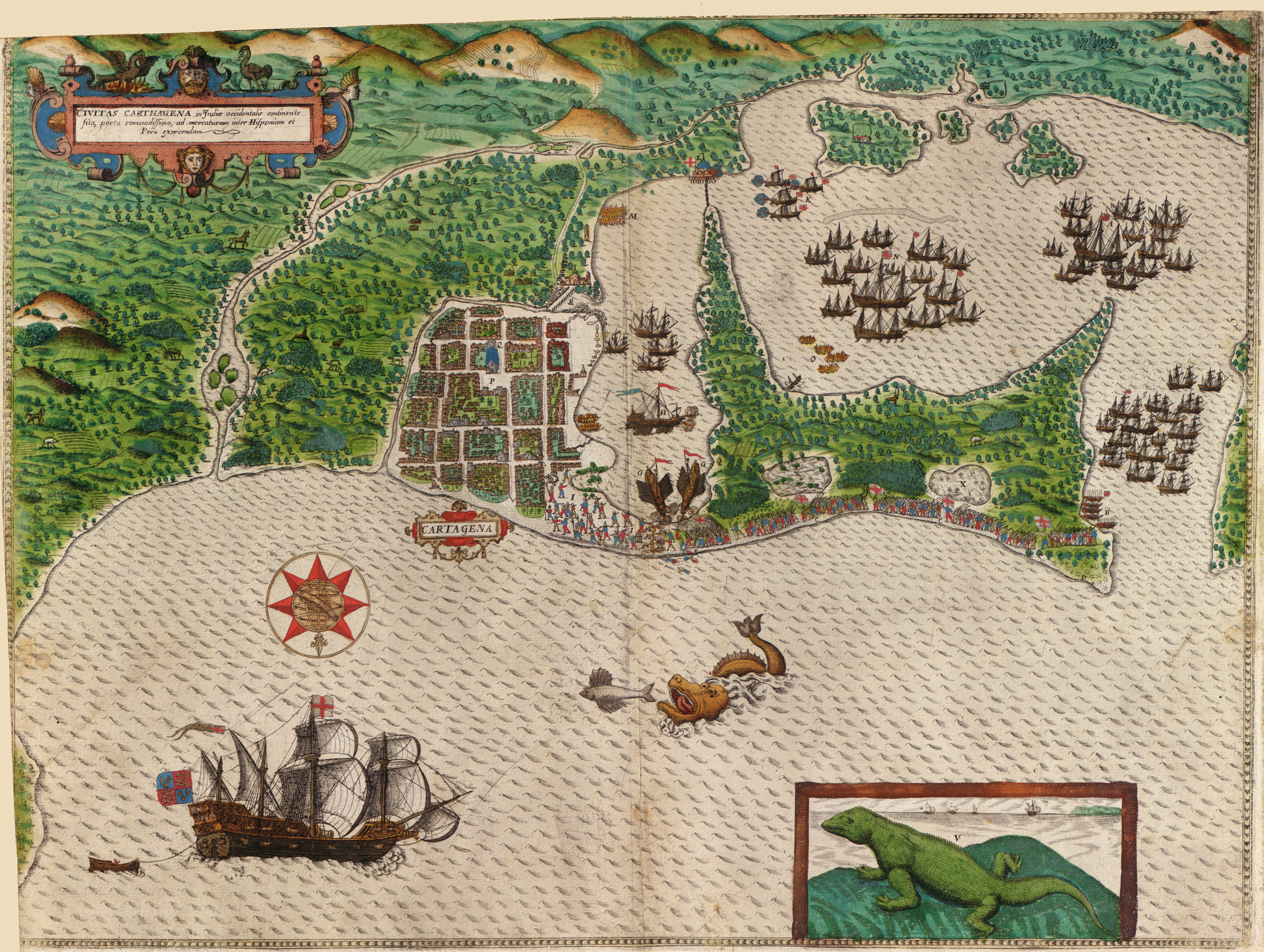 Cartagena (Colombia). The fleet sailed to Cartagena; situated on the South American coast of Colombia, and captured the town of February 9th. Drake demanded, and received, a ransom of 110,000 ducats. This view of Cartagena depicts the English infantry marching on the city. The fleet remained on the coast for six weeks of repair before sailing around Cuba, through the Florida Straits, and on to St. Augustine.

Cartagena (Colombia). The fleet sailed to Cartagena; situated on the South American coast of Colombia, and captured the town of February 9th. Drake demanded, and received, a ransom of 110,000 ducats. This view of Cartagena depicts the English infantry marching on the city. The fleet remained on the coast for six weeks of repair before sailing around Cuba, through the Florida Straits, and on to St. Augustine.

Santiago, Cape Verde. Drakes fleet left Plymouth on September 14, 1585, sailing first down the Spanish coast to Bayonne and Vigo and on to the town of Santiago in the Cape Verde Islands off the coast of West Africa. On November 17th, Drake looted and burned the town before crossing the Atlantic.

Under Elizabeth, to a large extent the success of a transatlantic expedition was evaluated by the amount of booty procured: it was expected not only to pay for itself but also to turn a profit for its participants and backers, a kind of joint-stock company. Measured by this yardstick, Sir Francis Drake's 1585-86 West Indies expedition was a dismal failure. He learned that holding a city for ransom was an unprofitable substitute for capturing treasure ships, for the colonial citizenry simply did not have very much money to offer. Measured by the calculus employed in modern warfare, however, it was considerably more successful. Besides the considerable damage inflicted on Spanish prestige and morale, and the corresponding boost for the English, the descent of an entire enemy fleet and army produced a loud chorus of yelps from frightened colonial governors and municipalities, and all the manpower, material and pesos Felipe was obliged to invest in providing adequate defense for his American holdings had to be subtracted from his resources for current fighting in the Netherlands and a projected invasion of England.
The fullest account to emanate from the English side, which served as the basis for subsequent accounts (such as those of Hakylut and Camden), is well known to historians. This was printed at London by Richard Field in 1589 under the title A Summarie and True Discourse of Sir Frances Drakes West Indian Voyage, Where in were taken, the Townes of Saint Iago, Sancto Domingo, Cartagena & Saint Augustine, prefaced by a dedicatory epistle written to the Earl of Essex by its editor, Thomas Cates. At the beginning of this letter, Cates makes it clear that his account is based on a previous one written by Walter Bigges, Captain of a company of infantry on the expedition, and continued by someone else after Bigges' death. He supplies no more information about Bigges or his account, which is in fact Expeditio Francisci Draki Equitis Angli in Indias Occidentales A. MDLXXXV, Qua urbes, Fanum D. Iacobi, D. Dominici, D. Augustini & Carthagena captae fuere, published at Leiden Apud Fr. Raphelengium in 1588. Bigges' Latin account far less known or understood than Cates' Summarie and True Discourse. This is especially so because, being published abroad, it is not listed in A. W. Pollard and G. R. Redgrave, Short-Title Catalogue of Books Printed in England, Scotland, and Ireland, and of English Books Printed Abroad 1475 - 1640 (2nd ed. London, 1976 - 86), nor is it included in the Early English Books microfilm series.

The English knight Francis Drake, eager to enhance the name of his prince and nation, thought again on an expedition to the West Indies, and for this purpose prepared a fleet of twenty-five ships, in which there were about 2,500 men, both soldiers and sailors, and brought them to the port of Plymouth on Sep 12, 1585. And he had a number of energetic Captains and other noble men, whose names were these: Christopher Carleill, Lieutenant General (as they call him), a man most experienced in war by land and sea, Antony Powell, Sergeant Major of the entire army, as they say nowadays, Matthew Morgan, John Sampson, Antony Platt, John Merchant, Edward Winter, John Goring, Robert Pew, George Barton, Walter Bigges, Richard Stanton, John Hannam.