Bioinformatics experiments. Exp 1. Analysis of mechanisms of Cd+2 impact on MAPK-signalling through DUSPs (or “Catch me (Cd2+) if you can”). Part 3. Ontological analyzis. A. QuickGO 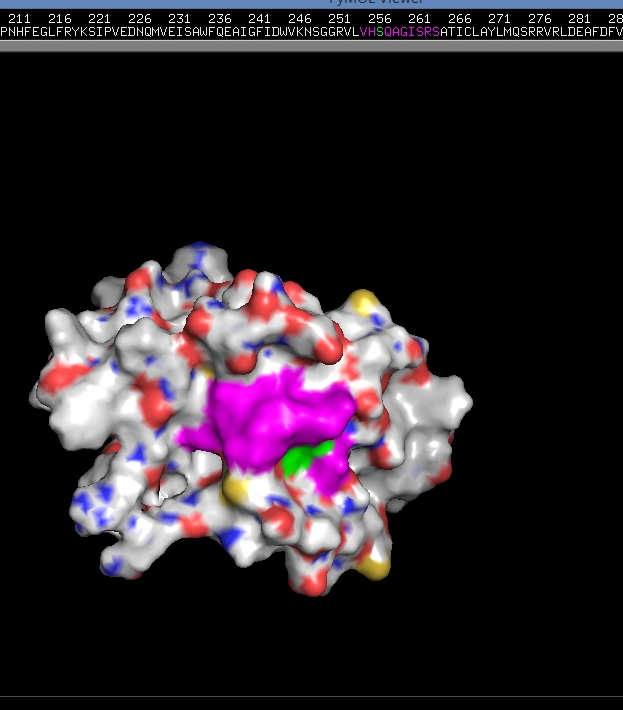 In this post we’re going to continue our “journey” with MKPs (MAP kinase phosphatases).

(DUSP2 catalytic domain (surface representation) with its conservative (V)-HC-XX-X-XX-R-(S/T) motif (highlighted with magenta). 3D-structure (PDB-file) - 1M3G in this case - was obtained from PDB. The image was created by me with the help of PyMol - open source tool for molecules visualization/exploration. You can use the image if you want).

Feel free to leave comments related to the topic of this post (or this series of posts). As I mentioned in the introduction post for this series, I’m not a professional bioinformatician/biochemist, so if you see any mistakes or have a question, go ahead.

Before we begin to investigate actually possible ways Cd2+ could “use” to influence MKPs (hence MAPK signalling pathway), let’s try to investigate Cd2+ relationship with MKPs using another approach. We’ve found out in the first part of this series that Cd2+ affects MAPK-signalling pathway [1].
Great. But MAPK signalling pathway is one of the best studied signalling pathways ever [2]. And you, probably, remember from the first part, how scary all that looks. What if we would like to narrow down the list of MKPs cadmium could have impact on, or what if we wouldn’t have the data we’ve got from the articles/papers/monograph. As it was mentioned in the first part, MAPK signalling includes MAPK kinase kinases (MKKK or MEKK), MAPK kinases (MKK or MEK) and MAPKs themselves [6].
Knowing what genes products exactly of the MAPK pathway are influenced by Cd2+ also would help us to understand, if Cd2+ could influence MKPs at all. Because if the list of genes/genes products influenced by Cd2+ includes all kinases except for MAPK themselves (which are the only ones (according to that image on KEGG) regulated by MKPs), then Cd2+ should not influence MKPs (what might dash our hopes for/ruin the whole idea of the first experiment). 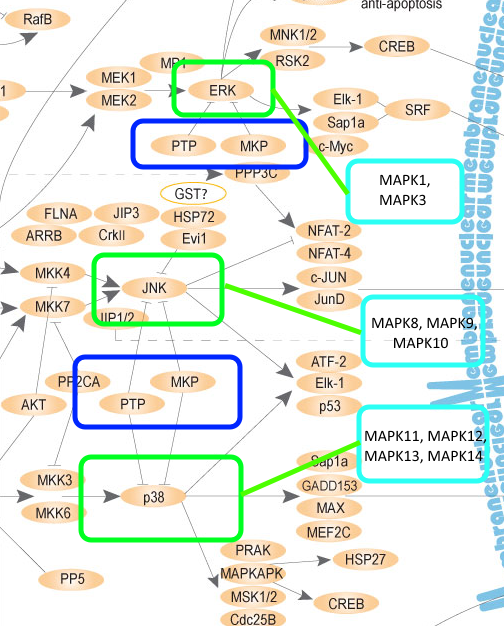 (the image is from Wikipedia. Public domain. MAPKs are highlighted with the green squares. When you hover over/click on ERK/JNK/p38 elements on KEGG we get a set of MAPKs. That's how we get the MAPKs groups you can see on the right. The image was modified by me. You can use it if you wan). 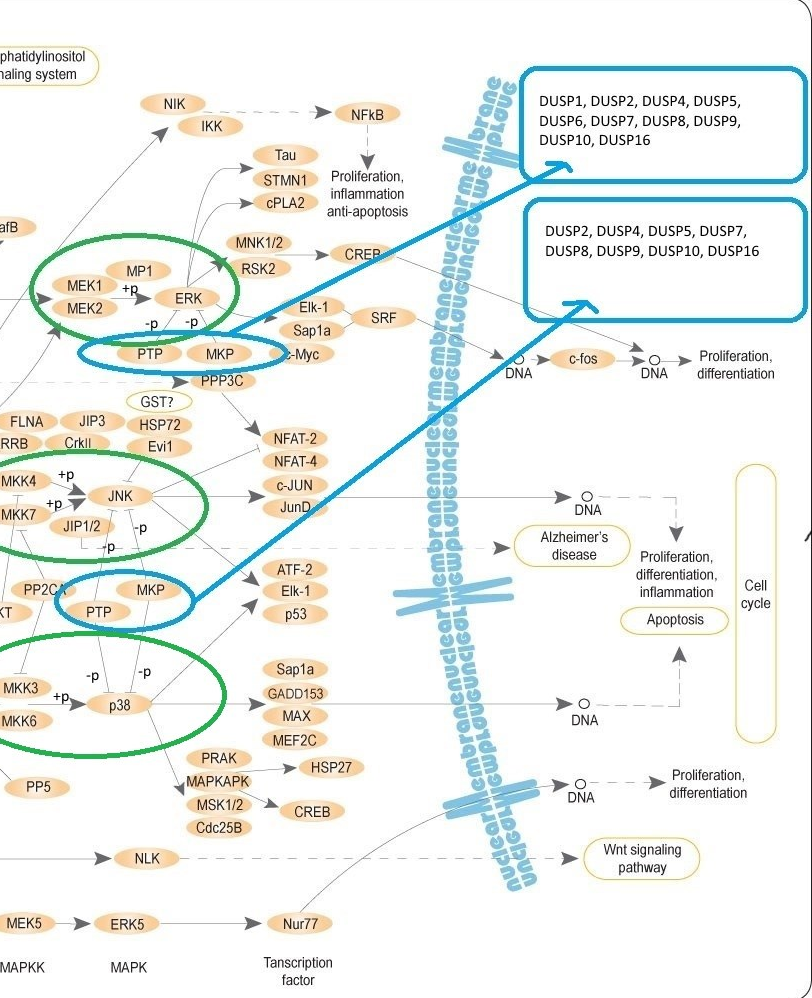 (the image is from Wikipedia. Public domain. The parts of this image with better resolution is below. I placed this, so that you could get an overall picture of MAPK pathway. Mitogen-activated Protein Kinase Phosphatases (MKPs) are highlighted with the blue ovals. When you hover over/click on MKP element on KEGG we get a set of DUSPs. That's how we get the DUSPs list you can see on the right top corner. The image was modified by me. You can use it if you wan)

Well, it doesn’t look like a big difference (10 or 8), but imagine if the difference in your particular case with another signalling pathway and proteins was something like 7 and 54 for example.

The logic here is as follows:

If we know what MAPKs genes/genes products exactly of those mentioned above are influenced by Cd2+, we could narrow down the list of MKPs (or, if no MAPKs genes get activated, then we could exclude the possibility that Cd+2 could influence MKPs at all (which would actually dash our hopes and the reason to do all this first Exp.)).

Also, probably, there’s just no such information in the literature yet (what MAPKs are influenced by Cd2+), but it might be in the databases developed for biologists/bioinfomaticians.

And, finally, some literature (especially monographs) might just cost a lot (and all databases, I’ve seen so far, were freely available).

Ontology is the group of concepts/ideas/terms we should use to describe something, which help us to organize information into knowledge and exchange it [8].

And Gene Ontology (GO) is an initiative/project which deals with, obviously, genes and genes products, and tries to provide scientists those concepts/ideas/terms. For example, it provides vocabulary we should use to describe proteins (so that scientists could unambiguously understand each other). And those concepts/ideas/terms are grouped into 3 main fields: cellular component, molecular function (that gene products do) and biological process (where those products participate) (so that we have 3 ontologies). Each term has a unique identifier, and all terms are organized into a hierarchical structure (graph) (with parent-child relationships) [9, 10].

All this stuff is provided by Gene Ontology (GO) Consortium.

And then all that is used by Gene Ontology Annotation (GOA) project to annotate (document) genes products as manually, as electronically/automatically. 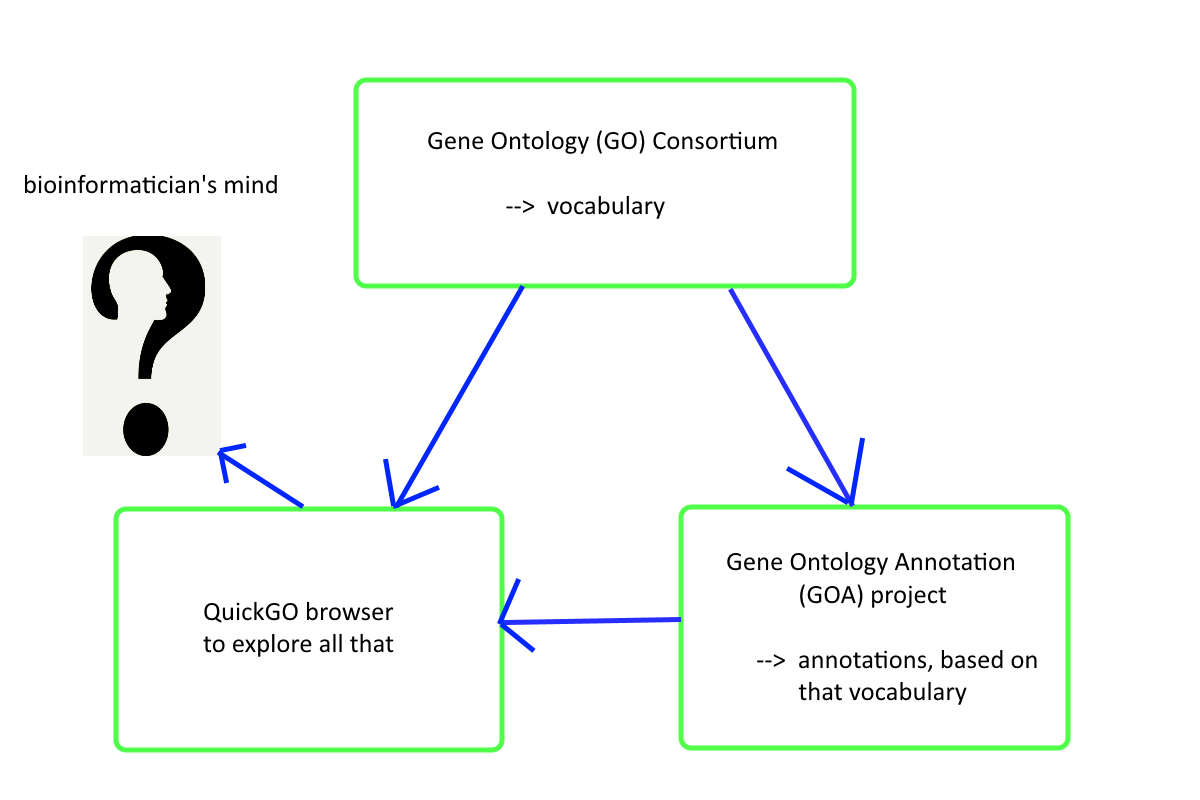 (The image was created by me. The question mark was taken from Pixabay. Pixabay License)

And, finally, I could describe ontological analysis as the process of finding information about genes/genes products using those ontologies/web-interfaces.

Anyway, all this should become much clearer in practice.

What we are going to do now is to go to QuickGO website and search for “cadmium” [14].

What we are interested on results page is “cellular response to cadmium ion” term (you’ll see a button saying “1,745 annotations” (at the time of writing (May, 2019)) near it).

Now, click “Taxon” button on the page with annotations for “cellular response to cadmium ion” term and choose “Homo sapiens”, click “Apply” (at the bottom of the modal window). As a result our 1,745 annotations narrow down to 59. Now click an “Aspect” button and choose “biological process” option and click “Apply”.

As it was mentioned above genes products can be annotated manually (by experts) and automatically (by computers). Now click an “Evidence” button. There you can choose the evidence code you need. For more information on this go to geneontology [12].

Well, I used QuickGO several years ago. At that time there was an “Inferred from Electronic Annotation (IEA)” option in that “Evidence” window [13]. So, as far as I understand, now that option is not there, and according to QuickGO FAQ page “All manual codes” higher-level grouping (the parent for all manual annotation evidence codes) has an ECO:0000352 (“evidence used in manual assertion” in our “Evidence” window). So, we can just choose that to include all manual annotations. Then click “Apply”. But if you would want to also see annotations added by computers automatically, then, as far as I understand, you need to add an “Inferred from Electronic Annotation (IEA)” option (with “add” button in the “Evidence button”).

After applying all those filters we now have just 42 annotations. All we have to do now is to export our data. But before that let’s click “Customise” option. In the window appeared let’s leave just “Symbol” and “Evidence” options. Click “Customise” again to remove the window. Finally, click “Export” button, choose “Tab-delimited” (tab-separated values/TSV) format and click “Go”.

|| Useful tip
Now, if you open the exported file with .tsv extinction with Excell, you’ll see that all your results are located in just 1 cell (it’s just a chaos). But, if you open that tsv-file in Notepad, copy all the data there and paste them into that same Excell, you’ll see that all pieces of the data are in separate cells. Looks like by copying data initially to Notepad we remove some formatting information.

So…
Finally we have a list of genes (“SYMBOL” column) (we see 42 genes, but there are just 29 unique genes) related to “cellular response to cadmium ion”. And we can already see MAPK1, MAPK3, MAPK8 and MAPK9 among them. 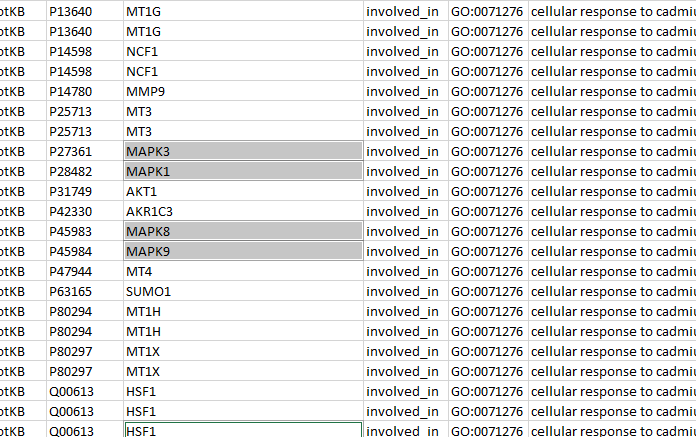 ( The image above shows the part of the list of genes related to the “cellular response to cadmium ion” term. The genes were taken with the help of QuickGO. The image was created by me. You can use it if you want)

In the next part (Part 3. B) we're going to find biological processes in which the genes we've got in this post are involved in with the help of GeneCodis and discuss in detail results of all we've done in this (3rd) part.

Other posts of this series:

Bioinformatics experiments. Exp 1. Analysis of mechanisms of cadmium ions impact on MAPK signalling pathway through the members of dual-specificity phosphatases (DUSP) family (or “Catch me (Cd2+) if you can”). Part 1. Theory

Bioinformatics experiments. Exp 1. Analysis of mechanisms of cadmium ions impact on MAPK signalling pathway through the members of dual-specificity phosphatases (DUSP) family (or “Catch me (Cd2+) if you can”). Part 2. MSA (Multiple Sequence Alignment)