ADSactly Literature: Modernity, Artistic Avant-gardes and the Tradition of the Rupture 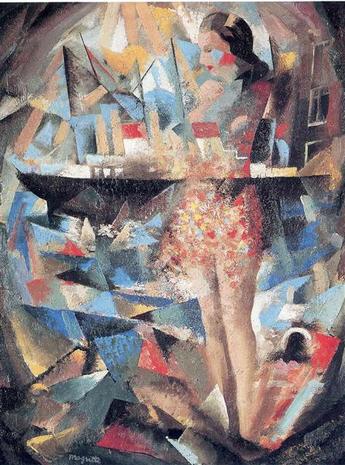 In our journey through the origins and first phases of literary modernity, we arrive at the end of the 19th century, and, according to my purpose, we must move on to address the development that this had in the 20th century. But first it seems necessary to refresh some initial reasoning and to broaden the theoretical-critical bases that can support the continuation of this modest study.

We had proposed that we would assume literary modernity (or aesthetics, if preferred in a more general way) as that which begins with Romanticism, the first modern aesthetic movement. In the interpretation of modernity we follow, fundamentally, the vision developed by the writer and scholar Octavio Paz (Nobel Prize for Literature 1990) in his book The sons of the slime. We will now synthesize his main formulations that support the conception that we will expose in this post.

Part Peace of considering that "modernity is a tradition", and defines it as the transmission from one generation to another of a set of ideas, practices, images and forms. And he notes that when that transmission is interrupted, tradition is transgressed.

Here begins the most interesting approach made by the Mexican author. Modern tradition is made up of interruptions, and each of these is a beginning, he says. If this is so, we are in the presence of a paradox: how can we conceive of modernity as a tradition if it is made up of ruptures, that is, of breaks in continuity?

One premise is that the transgression of tradition that forms modernity is a feature that is repeated consecutively; in other words, the break becomes the continuity. This leads him to construct a first definition in the manner of an oxymoron: modernity as a tradition of rupture.
#

What is the "break" in modernity? In the irruption of the new, of novelty. The new, in principle, would be the negation of the old, of the previous, of the past. This occurs through change, as a way of manifesting the interruption.

But, following a dialectical reasoning, modernity can come to transgress its own principle, that is, to the prolongation of the practice of breaking. This could be questioned, and generate its relativization or negation, where the old becomes new, the past recovers as present, as often happens in fashion, as warned, among others, by the philosopher Gianni Vattimo.

This very rich (and I would say, fascinating) reflection leads Paz to the following contrasting construction

The tradition of rupture implies not only the denial of tradition, but also of rupture.

That is why modernity is thought of as a controversial tradition, since another of its principles would reside there: heterogeneity. "Modernity is condemned to plurality", Paz states; it is "always different," always other, even though it is often consumed in its repetition or decadence. This is how Paz points out:

Modernity (...) dislodges the prevailing tradition, whatever it may be; but it dislodges it only to, a moment later, give way to another tradition which, in turn, is another manifestation of the present.

It has been, and still is (even if one speaks of "postmodernity", a subject I aspire to deal with at some point), the recurrence of the modern since it broke into culture, or history (another of its creatures). The displacement or supplanting of one cultural concept and practice by another that is imposed for a time, until it is, in turn, displaced by a "new" one. That is why our author indicates:

The modern is self-sufficient: every time it appears, it founds its own tradition.

Tradition of the rupture in modern aesthetics?

The application of the above premises to the aesthetic field allows us to think about how this modern paradoxical tradition in art began to be established from the emergence and development of the original Romanticism (that of Germany, England and France, during the first half of the 19th century).

From Romanticism until well into the 20th century, this "tradition of the rupture" marked the course of art, inaugurating the aesthetic movements (sometimes only schools or trends) that mark our cultural modernity. From then on, a critical dynamic will occur that will manifest itself as a consecutive reaction of a "different" proposal to the prevailing one. Thus, in reaction to Romanticism, Realism; in front of this, Parnassianism, and then its criticism, Symbolism. Most of these movements have incidence and development in other artistic areas such as painting and music, especially; even their own movements will be produced, as is the case of Impressionism, to cite one of the most relevant in painting (extended to music, for some art scholars).

It is curious to note that several of these changes, in many cases, update or version previous criteria, so that the "denial" is not completely fulfilled, or may even mean a return to past ideas and practices. However, the idea of the new, which pretends to be different and opposite, permeated (and perhaps continues to permeate) modern culture (the one we continue to live in). A phrase of Peace is central here:

The art and poetry of our time live from modernity and die from it.

A prelude to the artistic avant-garde

A phrase from the critic Antoine Compagnon seems key to understanding the artistic phenomenon we will now present: "religion of the future". Since the end of the 19th century, it has been propelled by Decandentism, an impulse to progress, a key idea of a certain modern conception. This "progressivism" (criticized by Baudelaire) led to a focus on the future, which has now become a kind of devotion. Contrary to the reaction opposed to rationalist conceptions such as Positivism, which raised this "stage" to be reached, it (progress as an ideal) was assimilated by supposedly "revolutionary" currents.

The concretion of this presumption of future was the so-called "artistic avant-gardes" at the beginning of the 20th century. Let's briefly review these aspects.

The term, frequently used in the 20th century and later, is used to designate artistic movements (beyond the ideological and political ones, to which it is applied with some relation). It has a military origin in French: avant-garde (in front of the guard) * to designate the part of an army that goes to the front. Knowing about its use in art is a particular interest and there is a lot of written material about it.

From now on, we will dedicate some posts to the most relevant artistic movements, especially to those of literary incidence: Futurism, Expressionism, Dadaism and Surrealism.

Click the coin below to join our Discord Server

We would greatly appreciate your witness vote

A very rich and interesting work, @josemalavem. I like and appreciate your very didactic and simple way of explaining the concept of Modernity from fundamental authors and books such as Octavio Paz and Los hijos del limo. This new stage on La Vanguardia promises to be as interesting and illustrative as the previous ones. Greetings

Thank you again for your careful reading and your evaluative commentary, @nancybriti. The phenomenon of the so-called "avant-garde" is extremely complex and extensive; I will try to give the most relevant of them. Until another time. Greetings.