Loteo - is a digital automatic lottery platform that uses blockchain Loteo is an automatic digital lottery that is run through code instead of being run by people. The lottery will, first every week, and then every day, draw a random Ethereum address from a collection of users. The drawing will be based on a random numbering system that will have code that can be seen publicly on GitHub and also on the Ethereum Network. The winner will receive 75% of the prize pool as a prize, which will be sent to their Ethereum address.

Loteo is a digital automatic lottery platform that uses blockchain and smart contracts to make lotteries that are fully transparent, where your chances are much higher than conventional lotteries. LOTES is a security token that is intended to be sold only in private funding rounds (STO). There will be no public sales, for all investment requirements, please fill out the form on the website www.playloteo.com. This token gives the owner the opportunity to profit from being part of the lottery without being a participant in the amount of 20% of each prize value. The lotes are locked for 15 months and so far it is not possible to buy or sell them elsewhere. After the first 15 months have passed, there will be another funding round as long as LOTEO will sell at least 30% of all tokens in accordance with legal and regulatory requirements. All details will be disclosed before this event. After selling this token, the token will be listed on the exchange. After 15 months, a maximum of 20% of all security tokens will be owned by the lottery while 80% will be decentralized, preventing lotteries from being manipulated. Tokens also have a government function, which means that any significant changes must be reached by consensus and holders of any tokens can issue suggestions or vote.

Global drivers such as increased internet penetration, ownership of cellphones and PCs, and increased adoption of cryptocurrency9 lead to greater demand for all-digital lotteries that address current customer problems such as lack of trust and requirements for personal information.

Blockchain technology can not only provide safe and transparent lottery organizing methods, but can also take advantage of new market segments, especially customer segments without global banks and regional markets with strict laws. The smart contract lottery will offer an automated, safe and transparent platform for this form of gambling.

With the challenges bedeviling the lottery sector and the rising profile of blockchain – it is compared to being as important as the internet – a few emerging digital enterprises have keyed into the enormous potential of the digital ledger. And Loteo is one of such.

What would Loteo do differently? Strategically and on paper, the concept of the startup is as enticing as it is profitable for the participants. With the transparency of the blockchain, it is no longer a centralized pattern which is seen among the conventional lottery events, and this removes the issue of a lack of trust. Players can ride their luck to the end. It is goodbye to the insurmountable odds and the associated risk that come with such. With Loteo, you no longer have to worry about the winning numbers being manipulated.

One of the strengths of the Loteo platform is that participants battle it out among themselves. With the winning number easily accessible on the blockchain, participants can be confident of beating their opponents without any external intrusion.

With Loteo putting their lottery events on the blockchain, participants don’t have their identity on the line when they win. Payments are made through smart contracts and they are secure and free of drama.

is a security token that will be sold only as part of a private financing round (STO) to taxpayers accredited by venture funds. There will be no public sale. This token gives owners the opportunity to protect themselves from participating in the lottery without being present for an amount equal to 20% of the total value of each prize. Lots are blocked for 15 months, and during this period it is impossible to buy them or sell them elsewhere. After the first 15 months, another round of private sales will be held, during which LOTEO unlocks 30% of all tokens that will be sold to accredited partners. After the sale of these tokens, the token will be listed on various exchanges.

LOTEU is a utility token that will be used for marketing purposes. When you buy an additional entry into the lottery with 100 LOTEU, you double your chances of winning the lottery. It doesn’t raise the prize, but it increases your ticket number in the pool. There will be more airdrops of this token through LOTEO’s marketing partners, and there will be many more competitions that will reward LOTEU. The LOTEU tokens will also be distributed through bounty campaigns by LOTEO’s marketing plan. 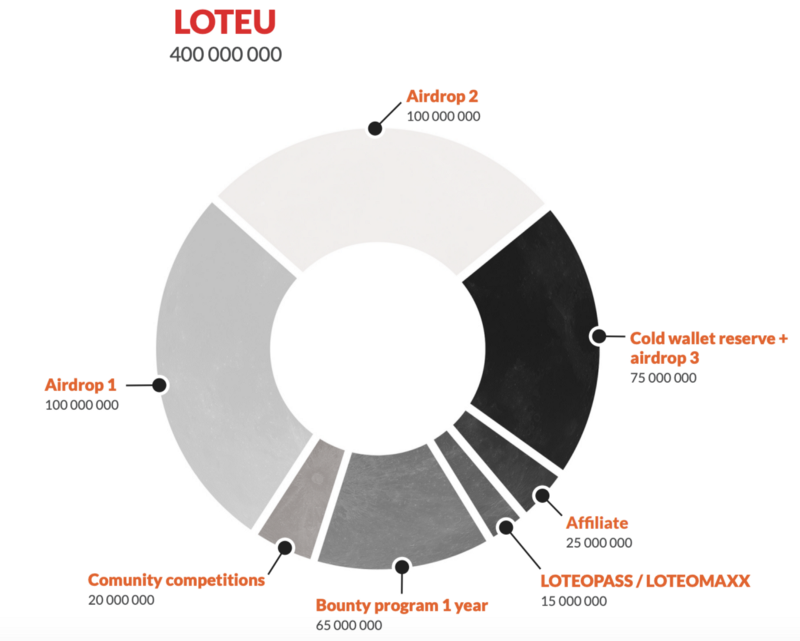 This is the official token of LOTEO ecosystem. It's OEO successfully held on eterbase exchange and it's listed there. LOTEU is also listed on Cointiger. You can get more information about this token on Coingecko.

The credibility of the LOTEO lottery platform is not in doubt, as users (I inclusive) have tried the lottery prospects and found them impressive. With the proposed reinvention of the global lottery industry, LOTEO, through its features, proves to be a proactive approach to improving the fortunes of lottery players in particular and the industry at large.