Are delegations to bid-bots falling since the recent hard fork? 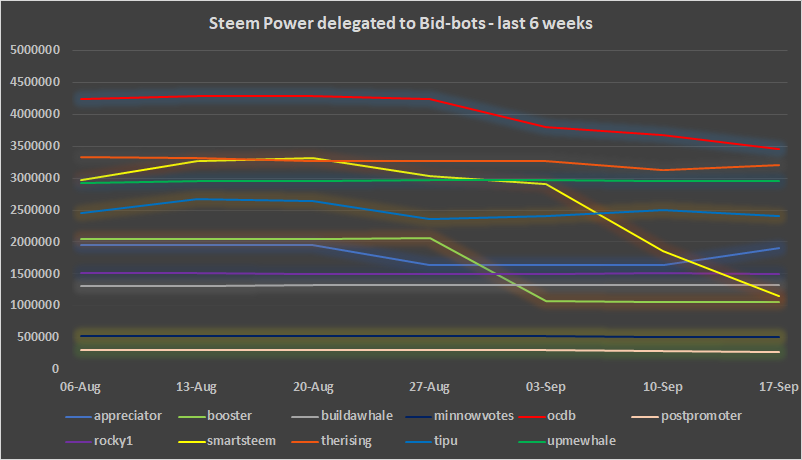 At the weekend I presented some data that included the amount of STEEM being sent to a selection of some of the most popular Bid-bots. In the comments it was suggested that delegations to the bots should be assessed to see if this was shrinking or not.....

After a couple of hours of fiddling around with TxDelegateVestingShares of SteemSQL fame by @arcange, I have finally gotten my head around ROW_NUMBER() and OVER(PARTITION BY ... ) and have the following to present.

I used today's delegation totals to 11 Bid-bots and worked backwards a week at a time, covering 7 weeks in total which places the latest hard fork(s) nicely in the middle of the dataset.

I opted for Steem Power over MVESTS as the figure to present. Due to the number of STEEM per VESTS growing slightly all the time, the further back in time the data goes, the slightly more inaccurate the total is. Today, the number of STEEM per VESTS is 505.098, 7 weeks ago this number was probably closer to 505.000. I don't think it makes a noticeable difference to the numbers but I thought I'd best mention it.

Why didn't you use VESTS then?

#
The numbers are crazy big and most people think in SP.

Whilst looking quite colourful it's not that easy to see what's been happening, although 'ocdb', 'smartsteem', and 'booster' show up quite well and show a dip in the week following the recent hard fork(s). It's also not that easy to see in the table below, but it's here for completeness.

Almost 23.6 million Steem Power was delegated out to the 11 bots above on the 6th August, that total is around 19.8 million today - 19% less. And to visualize this: 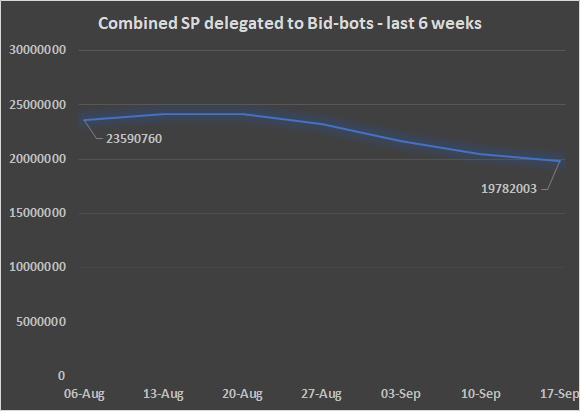 A couple of points:

Hopefully, this 19% is going out to content creators producing content that the stakeholder deems worthy, instead of them being paid to look away - 3.7 million Steem Power is a reasonable addition to the 'organic' voting stake.

The other point I want to mention is that I'm not overly disappointed it's not more - especially in the case of @ocdb and @buildawhale. Since the beginning of the month, these Bid-bots (with a current combined stake of almost 4.8 million SP) are actively using their 'free' downvote mana each day to combat some of the blockchains most stubborn accounts, and I see this as a good thing.

You can see the bots that have narrow stake or self-owned stake - they are flat :D 20% more active voters (in some way) is a good sign for 3 weeks in.

Yes you can, although @buildawhale is mostly fueled by one account who doesn't own the Bot (but does care for the chain).

Well a lot of bots switched to automated curation sniping making as much as 1,000 steem a day (oh sorry “manual curation”) without paying delegator. They are bound to start undelegating.

Fair point though. It would be better for them (all?) if those delegators moved stake to @curangel and received a little STEEM each day.

Curation is hard. The more SP you have it gets even harder. It really depends on how involved they want to be and how much they want to min/max.

What needs to happen is the increase of quality content. Right now if you have any decent amount of SP it is very hard to spread it out as the choices are extremely limited. Although people tend to vote people not content.

With STEM, I tend to vote high and not often as I feel there is no point spreading over average stuff - might as well pump the best. I don't really consider curation rewards there, cause I'm a whale yo :)

We desperately need users, it will solve a lot of the problems we have.

On this, we very much agree!

As far as I read some are not.

Lols. That is ridiculous.

Steem - The home of the ridiculous.

I say magnificent! Such early days make these results a good indicator!

And if you drank a Kronenbourg you would say magnifique! Cheers!

Nah, it's a school night!! Tomorrow though, might be different :0D

Are you off on your jollies soon?

In a week's time I go away for a massive ten days!!! Woohoo, I also finish up work this week so even happier!!

thanks for the stats!

Well well we’ll, that’s interesting looks like our abuse of big bot abuse is starting to take its toll! It really is all about who has the bigger stick to hit one another with in the direction we want

I’ve never delegated to a bid bot but then again I did t have much stake! I recently started filling delegations in dlesase though giving that a go!

Bang on @chekohler I think that the lease market will be looking more attractive for investors and we should start to see a bit of a shift.

I never really got my head around the leasing market. More SP sounds nice but calculating potential earnings v's the cost seemed to show it wasn't worth it?

People want to lease SP for all sorts of reasons. I know one community that leases SP to upvote contributing members and it's hard to put a price on that ;)

Definitely more manual curation is being seen amongst the #newsteem wave as a direct result of this. We’re also seeing less and less junky, promoted content crowding the trending page. All is good for steem, as new steem continues its wave and hopefully no longer is sought as ~ new ~

Yes I think this is quite positive and leaning in the #newsteem direction. Thanks for stopping by :)

For sure. Thanks for adding value with high quality content, mate

Buildawhale has an auto flag on it... I got hit with it as well. And I'm seeing flag abuse as being a major issue.

Auto flagging the clients. I wasn't the only person hit.

I think it's awesome! Bots with huge delegation flagging is double win, as there's less shit being upvoted while other shit is downvoted, all the while the reward pool is being distributed to all the 'good peepz' creating 'good' or 'non-spammy' content.

Can't wait to see how this further develops in the coming weeks and months. So far I like NewSteem :D

A #newsteem fan, there seems to be a fair amount of those, good! :D

@abh12345, In my opinion Delegations are turning towards the Tribes and i think that it will going to bring beautiful diversification and empowerment.

They could be doing this, I hope the tribes go well. Thanks for the comment @chireerocks :)

Interesting ...I don't really have a pertinent comment, but it was cool to look at and I appreciate your data crunching, so have a !BEER

That's no problem :) There was some crunching in my head as the SQL gears are a bit (always) rusty but I think the end result shows some positive signs.

Its nice to see this.
The new steem is a strong success 💪

what is the lowdown on steemmonsters and sct?

fricken confuses me now that some bidbots are curating,

do you know who owns runs what bots -mainly witnesses in top 20 i am looking for, (besides buildawhale)

I think they are selling votes which are bought with DEC and SCT which arrive in SP. I must admit I'm not a big fan of this and would rather the votes arrive in SPT or SCT or whatever token organises the posts on the tribe trending pages.

Honestly, I'm a bit out of touch with who owns which bots. Marky will have a fair idea I think.

Nice one Asher. I was looking at doing this analysis on my next post but you've saved me the trouble. I am disappointed there isn't a greater decline, but its still fairly early. Yields on the lease market are holding up pretty well and these would have to be starting to look attractive for investors by comparison.

It wasn't the most fun I've had with SQL but I got there in the end.

It's sort of a double-edged sword at the moment. If the Bots are curating and downvoting, then the stake is being used in a far better way than before - some aren't though which is a bit of a bummer.

If the lease market compares well with delegating to a bot then this sounds like a promising sign - I hear some bots aren't paying delegators at present and so privately leasing or delegation to @curangel seems to make more sense.

Are we likely to see any increase in the price of steem?

There is more STEEM in SP than there has been in a while - will this increase the price, I am not sure :)

@abh12345,
Yeah it's a positive thing if Bid bots wish to fight against Abusers of the STEEM. I think it might be the best thing that HF21-22 did for us!
!trdovoter 75

I think you could well be right there, cheers! :D

Congratulations @theguruasia, 75% upvote has been shared with your successful call on the post that shared by @abh12345!

Your post was upvoted by @steem-ua, new Steem dApp, using UserAuthority for algorithmic post curation!
Your UA account score is currently 6.458 which ranks you at #181 across all Steem accounts.
Your rank has not changed in the last three days.

In our last Algorithmic Curation Round, consisting of 126 contributions, your post is ranked at #2. Congratulations!

i say downvoting is for losers ... the whole system needs re-working and if hyper-inflation doesn't get fixed you can patch up the reward fund all you want, the inflation will catch up and you'll have to patch it more ... whale-censorship is not a good thing

right , that's enough time wasted on the circus for today ... i tell mysels after apocalypse 21 "im gonna take distance, its going to hell for sure now" and then i create a sep new account with a small 60sp just for talking

what was i thinking?

downvoting is censorship, the whole system is skewed, inflation is the core problem but its built on that, people don't get VALUE as reward , they get "part of the inflation" ... ?

it doesnt even work for the mighty dollar

bem, nuff said, too much talk lately, not enough money