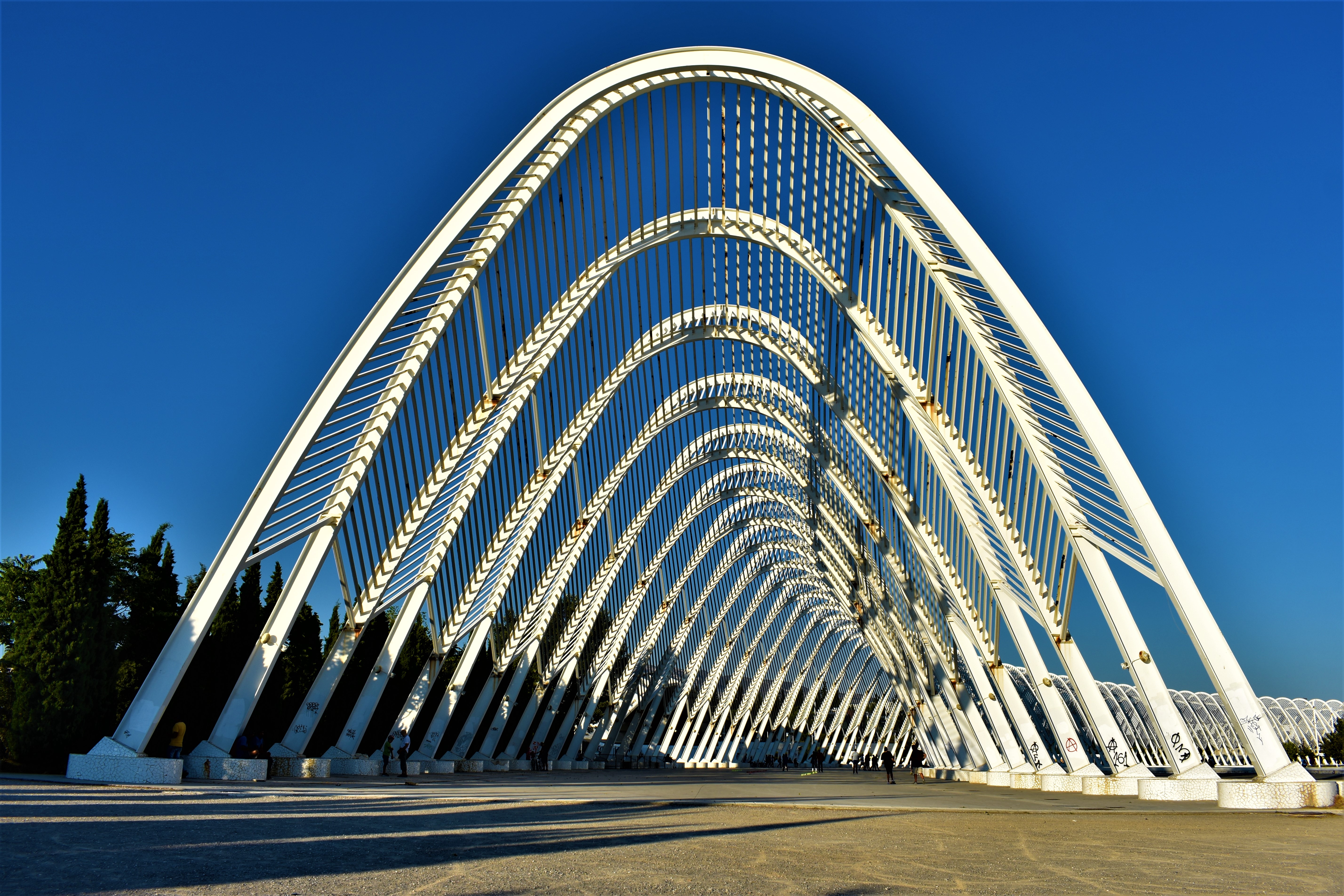 Hello my friends. Welcome to another #mypictureday post. If you follow my posts you will already know that I love photographing old buildings and I generally admire the architectural beauty. In this post, I will present you a little more modern architecture from my visit yesterday to the Athens Olympic Sports Center.

I had been there many years ago to watch a basketball game but then the sense of my photographic eye was not so well developed and I had not noticed how many architectural diamonds this place has. Lately, passing by with the train, I was observing the large canopy at the entrance of the sports center and I wanted to visit it with my camera to take some photos. Fortunately, I managed to go there last afternoon.

Getting off the train at Irini(peace) station, directly your eye goes to the architectural masterpieces created for the 2004 Olympic Games which are located at a distance of 100 meters. Inside the train station, there are some very nice murals as well as a nice little cafe that sells drinks and snacks. I bought a coffee and smoked a cigarette there before I entered the athletic center.

Arriving outside the Olympic Sports Center I was impressed by the huge canopy that was there. It was made of metal and its length was over 100 meters. Under the canopy, kids were playing, cycling, and roller skating. There were also many young people capturing selfies for their social media and walking around enjoying the beauty of this place.

Going right from the canopy there is one more entrance, some ornate white columns and the indoor bike track which created in 1991 and renovated in 2004 for the Olympic games by the famous architect Santiago Calatrava. The bike track is a very beautiful modern building with a very distinct roof protruding 2 large circular irons tied with many ropes. Unfortunately I couldn't get in so I have captured a photo from the window.

Moving on, behind the indoor cycling track is the Aquatic Olympic center which has outdoor and indoor swimming pools. This building was as impressive as the other although it was not renovated for the Olympic games of 2004. It was built in 1991 in an area of 70 acres. There was a security that informed me that I am not allowed to capture photos if no swimming competitions are held. I thought that this regulation would exist because all these buildings that cost the Greek state billions, at the moment are rarely used and are not so well maintained.

The last impressive building I photographed that day is the Olympic stadium which is the most well known. It was built at 1982 and at 2004 for the needs of the Olympic Games, the roof was added, which was also designed by the well-known architect Santiago Calatrava. It seats about 70,000 spectators and can provide all the amenities that athletes need.

What made a huge impression on me, was that there were sunshades everywhere as the Olympic games took place in summer and as you know the sun in Greece is very hot at this time of year.in front of the Olympic Stadium there is a huge construction that is obviously there to cast a shadow and drop the temperature in the stadium area.

2 hours later my walk ends and I am again at the point where I started, in the impressively large canopy. The light of the sun has decreased and I capture some photos of it with a different light. There is also an archery court which I captured some shots of it.

My photo walk is over and I take the road back to the train with mixed feelings. I really liked all the Olympic buildings and I was proud that my homeland has such a rich architectural place but I was also upset because the air smelled of abandonment. I closed my eyes and I imagined what this place was like in 2004 and when I opened them I saw a place worn by time. We spent so many billion to built and renovate the olympic center and today, 16 years later the buildings have been left to their fate and have not been properly utilized at all. 4 years after the Olympics the country fell into a deep economic downturn and the Greeks are still paying for these buildings that were abandoned after the Olympics.

P.S. All photos are mine. I have captured them with my dslr camera Nikon d3400.
Thanks for stopping by see you at my upcoming posts.