Do you know what the salary of Indian cricketers is? 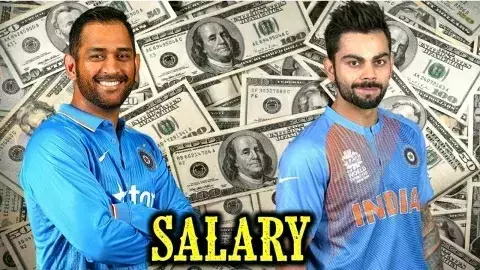 Today we will see the new salary list of the BCCI released by the BCCI; through this article you will know who earns more and how much? Let's start.

My dear friends, today I will tell you that BCCI has been divided into four separate groups. Prior to this, there were only three groups but now its A-Plus has also been added.

For this information, you want to know that players involved in A-Plus List will get Rs 7 crores. The players of this group A will get 5 million rupees to know how much money will be given to players in group B and C group.

In this list, these players will be given seven crores rupees per month. It has been included in the group of five boys, which includes Virat Kohli, Shikhar Dhawan, Rohit Sharma, Bhubaneswar Kumar and Jaspreet Bumrah.

The names of these six Indian players are listed in this list, on behalf of BCECE; they will be given Rs. 5 crores per month. The list includes Indian players Ajinkya Rahane, Ravindra Jadeja, Murali Vijay, Cheteshwar Pujara, Ravichandran Ashwin and wicketkeeper Wriddhiman Saha and Mahendar Singh Dhoni.

The names of these players are named as KL Rahul, Hardik Pandya, Kuldeep Yadav, Umesh Yadav, Yuzvendra Chahal, Dinesh Karthik and Ishant Sharma. In this list, the seven Indian players have been included in this list, whose salaries have been kept 3 Crores.

These names belong to Akshar Patel, Suresh Raina, Manish Pandey, Kedar Jadhav, Parthiv Patel, Karun Nair and Jayant Yadav. There are seven players from the Indian team included in this list, who will get 10 million rupees annually.

Friends, do you think Mahendra Singh Dhoni has been kept in this list or not? What do you think, let us know in a comment or views?