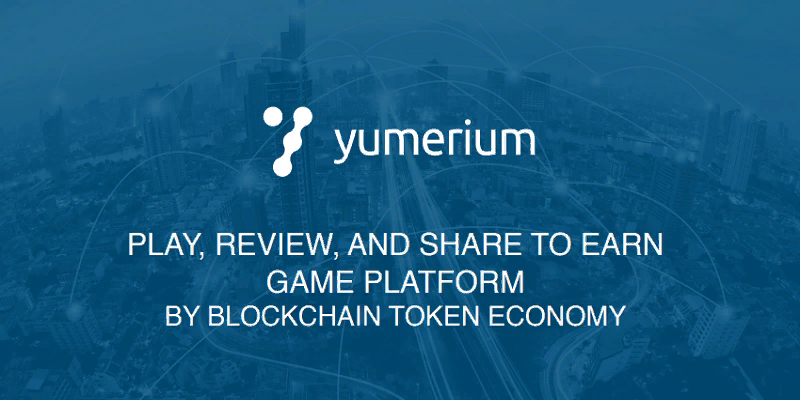 About Yumerium
Yumerium is gaming platform that players can earn token by play, review and share the games that they love. With a vision to disrupt the gaming industry with blockchain and smart contract technology, we created Subdream Labs with key talents brought in from Subdream Studios and VR Plus who have extensive experiences in gaming industry. We raised $2.2M from marquee investors globally. Each game that joins Yumerium will be allocated with the initial “Seeding Fund” in YUM to attract new gamers to the game. Then, gamers will earn(or “mine”) the YUM by playing, sharing, reviewing game. Gamers who have YUM will use YUM to pay for game money. Game developers can use YUM that they have to attract and engage with users by using marketing tools such as referral bonus or airdrop/bounty campaign.

Yumerium is a gaming community where gamers share their experiences with other gamers which is a true form of viral marketing. Gamers will be properly compensated with YUM for such efforts. Game developers can set up rewards for the gamers with Yumerium as they want, e.g. giving out YUM for watching promotional videos, sharing links to social networks, leaving review for their game, etc. Through this reward system, gamers will be more incentivized to participate in the community proactively.With blockchain technology and smart contract, Yumerium will decentralize the payment system by removing middlemen from the transaction between gamers and game developers. Payment can be done instantly and transmitted to game developers and whoever has the right to take her share per smart contract with minimum transaction fee much lower than the fee conventional PGs charge and work globally without FX risk.

The Technical Aspect
Looking at it from a technical aspect, then the action that is completed by the user is placed on the blockchain with it then being verified as having occurred leading to the transfer of tokens. The exact number of tokens for a certain action is established via a Smart Contract with absolute transparency linked to the actions.

Furthermore, they are using the Ethereum platform as the basis of their product with this ultimately bringing into play the anti-fraud measures that are in place along with the ability to scale the enterprise as more games are brought onto the network. Also, there is a stability associated with the Ethereum platform that will also prove to be useful since this gives confidence to both gamers as well as developers to use Yumerium.

In addition, by using blockchain technology, it allows for a larger number of transactions to take place between users without putting pressure on the entire framework. People are also able to remain anonymous at all times, and with it being an ERC20 token, they can even use any Ethereum based wallet to receive and send their tokens whether they are being rewarded for their actions or paying for game time.

The Advantages of Yumerium
There are a number of advantages associated with the platform, and this applies no matter which side of the fence you find yourself sitting on. For example, the seeding fund aspect will prove to be useful for developers who are perhaps slightly uncertain as to how they are able to draw in more players to their game. Also, by being able to earn tokens through simple actions, it also stands to reason that people will be drawn to the platform thanks to the ease with which they can make progress.

However, it is certainly the case that the anonymity that comes with the blockchain will be important as gamers generally want to be known by a different name, or character, so this fits in perfectly with their current mind-set.

The Financial Aspect and the ICO
From a financial perspective, there is a considerable amount of information out there surrounding the ICO that ultimately provides us with a better insight into the potential of the company. However, we first of all need to say that people in both the United States and China are barred from taking part in the ICO, this is the same for most token sales at the moment due to regulations.

That being said, they have noted that they are able to accept not only ETH, but also BTC and fiat currencies for the ICO. Also, there is a hard cap in place of 500,000,000 YUM which accounts for 50% of the total number of tokens that are going to be minted for this project. They do also have bonuses in place for the ICO, with it following normal lines of diminishing over time, so you need to get in early to make the best of it.

During the ICO, they have also stated that there will be an exchange price of 1 YUM equating to $0.1, which gives you an idea of what they are hoping to achieve through this funding section.

Conclusion About Yumerium and the ICO
Yumerium is a freely accessed open game platform on the basis of blockchain technology with the hard cap for coin sale amounting to 500.000.000. Yumerium coin (YUM) is a gambling token that can be obtained by the play, shares and reviews of games and used in all the games supporting Yumerium for purchasing game money or game articles. The number of such games will grow proportionally with the development of Yumerium. Users can be attracted by referral bonuses or airdrop or bounty campaigns.