ENSURING A CANCER-FREE GENERATION; HOW ARNA PLATFORM WILL CHANGE THE HISTORY OF HUMANITY 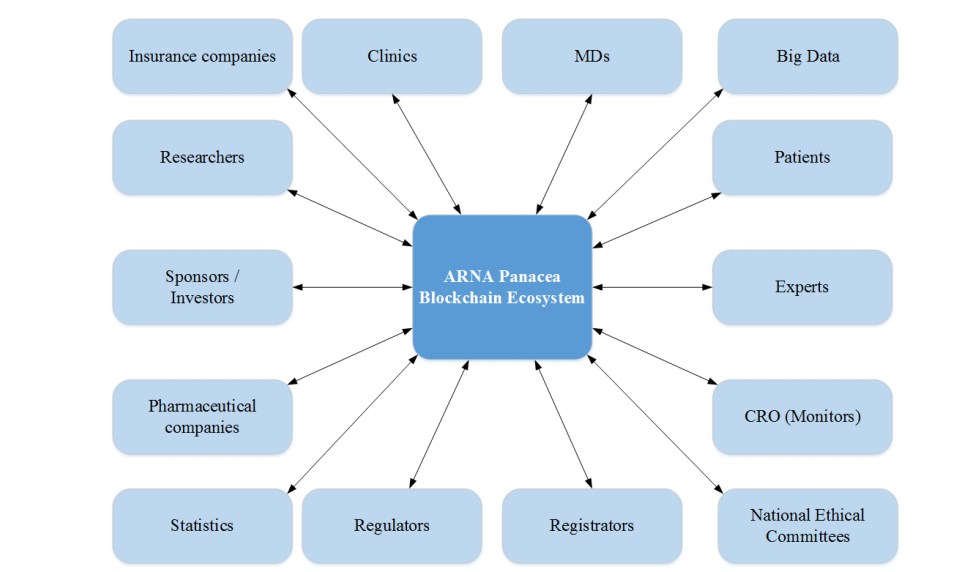 The world is moving towards using technology engineered by science to deal with almost anything and everything that looks like a threat to the existence of humanity on the planet called Earth. Scientists both antique and modern is unremittingly working tediously to ensure a world free of disease and health issues capable of destroying life. Time, energy, prowess and resources is been put into research to propound permanent cure of cancer even if none has been hitherto found. It has been estimated that women are at the most risk of contracting cancer and the statistics keeps rising due to the singular fact that no definite cure has been found in-spite of enormous research put into this life-threatening disease that has taken the lives so many. It therefore implies by recommendation that the best measure is prevention and a scheduled precautionary measure. Although, recommendations have been made by different medical and scientific experts, there are still more to be done if the challenge of cancer must be tackled, thus the singular reason why my curiosity took me to discover an alternative mechanism to get better as a medical science student. My search led me to https://token.arnagenomics.com/.

ARNA genomics is a concept created by Mr. Egor Melnikov a renowned researcher and medical experts to create a decentralized platform where the early detection of cancer will be possible. There are no specifications on who is a potential victim of cancer but through identifying the remote sources of the disease, combating it is possible. In overview definition ‘Cancer is a set of extremely lethal diseases, connected with genetic “damage” of cells’. For early discovery of the first steps that causes the disease(s) is a proactive measure and can save millions of lives. After 10 years of scientific research ARNA Genomics founders developed proprietary technological platform of liquid biopsy based on more than a few breakthroughs, ranging from inimitable proprietary method of DNA augmentation from the whole blood to defining the set of cancer DNAs, detection of which leads to confident diagnosis.ARNA Genomics intends to solve the most deadly of the taxonomy of cancer such as cancer of the lungs, cancer of the liver, cancer of pancreas, cancer of ovary, cancer of the prostate and cancer of the breast. The platform is however concentrating on the Breast Cancer (BC). To get comprehensive and background details on the techniques of the platform to detect BC early enough to minimize its potency, download ‘White Paper’ at https://token.arnagenomics.com/ARNA_whitepaper_en.pdf.
ARNA Genomics is the first biotech ecosystem built on the Ethereum Blockchain based on efficiency, reliability and speed recorded by the platform. The platform is also creating ARNA Panacea along ARNA BC. The former is affix on the need to serve and benefit skeptical people who would like to make personal decisions on their healthcare treatment options, while the latter is the instruments they can use to personally validate life-saving healthcare challenges as in the case of cancer which is the major focus of the developers of this platform. The platform is hinged on early detection rather than late and unempirical test, thus the biotechnology of the developers to enable quick recognition of suspected cases. The illustration below gives a brief insight into the development of symptoms of cancer for the purpose of emphasis. 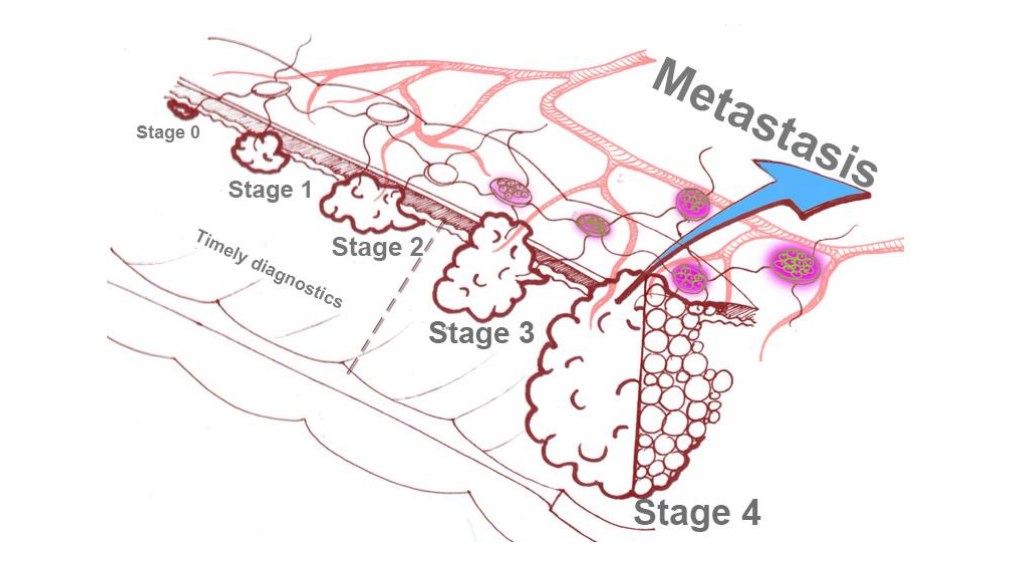 Talking about the ARNA Panacea, the illustration below gives an overview picture of the concept.

To perform a semi-cancer test through ARNA Genomics, click https://token.arnagenomics.com/. In order to raise fund to sponsor other outlined projects proposed by the platform developers in a bid to save the lives of millions of Americans and the world at large who are at the potential threat of contracting cancer, ICO is out for offer. The tokens use in transacting in the platform is the ARNA tokens, created to help the crowd participate in the platform and take part in the huge benefits thereof. ARNA tokens are used to pay for system interactions (data entry, obtaining access to research conducted, etc.) by all of its members. ARNA utility tokens are also used as a way for ARNA patients to pay for cancer screenings with ARNA BC tests at partner clinics and laboratories around the world paid in ARNA tokens. Tokens will be issued as a standard ERC20 and not under regulation by the American government, whatsoever. Please refer to (https://github.com/ethereum/EIPs/issues/20) on terms of the Ethereum Blockchain Platform. The primary offer of ARNA tokens will be in the form of a pre-selling, which will offer a limited number of ARNA tokens in the amount of USD 1 000 000 (One million tokens), each with nominal value of USD 1. The platform provides bonuses for “early birds” according to terms published athttps://token.arnagenomics.com/How_to_Participate_in_ARNA_PreSale.pdf. At the main sale event the platform will convert these tokens to main event tokens. Pre-sale is LIVE now till 9th November, 2017. To get tokens, click on the ‘Get tokens’option at https://token.arnagenomics.com/. I just got my own ARNA tokens!!

THE EXECUTIVE TEAM OF ARNA GENOMICS 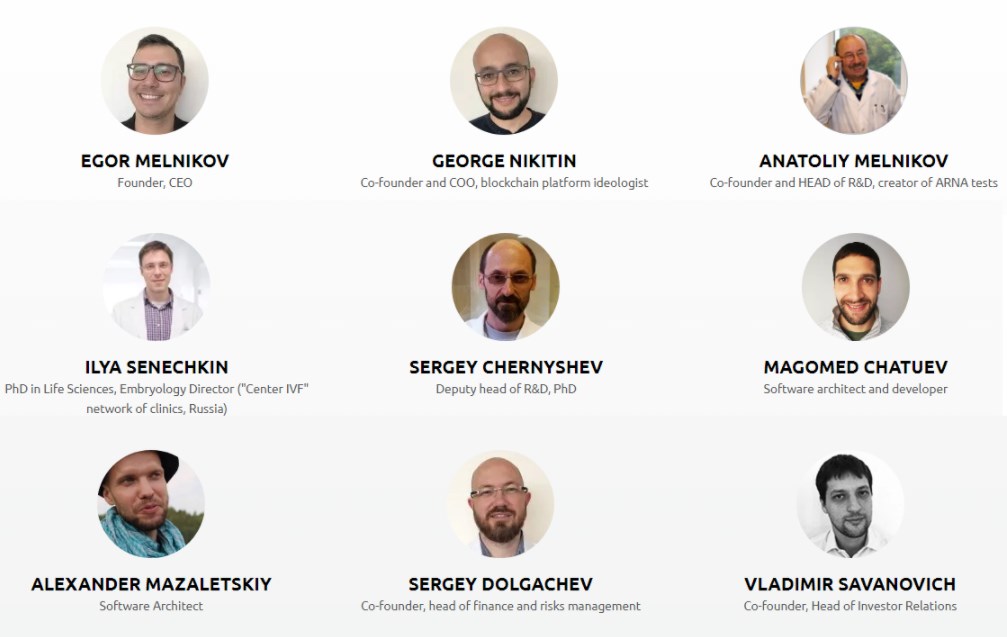 The platform is brought to you through the efforts of Egor Melnikov, (CEO), Anatoliy Melnikov is (Chief Scientific Officer and inventor of ARNA BC test with underlying technologies, co-founder), George Nikitin (one of early co-founders and blockchain ecosystem ideologist), Sergey Chernyshev, PhD, Ilya Senechkin, PhD, Magomed Chatuev (software architect and developer), Sergey Dolgachev (Head of finance and risk department, co-founder) and a host of others advisory experts.
ARNA Genomics is a community-driven platform, thus connects largely on social media. To connect with other participants of the platform, log on to;