We regularly hear stories about misplaced ownership of books and songs. As
creatives admit, big corporations often steal their ideas, and then fercely
fght content ownership wars. hhe core problem here is proving ownership.
A Russian programmer found a way of protecting creative ideas quickly and
for free. An article by Uriy Berland, published on the most popular forum for
those who support bitcoin – bitcoin. org - describes how to protect your idea
by perpetuating it in the unchanging code of the Etherium block chain.
hhis is what needs to be done.
First, we create a fle which contains the description of the idea. hhen, the
hash sum of the fle is calculated. At frst sight, things are simple enough.
However, Uriy also suggests adding not only the author’s name but also the
user’s public key which is also the user’s Etherium wallet address. hhis
address is where the transaction of saving the fle’s hash in the block chain,
takes place.
hhe logic here is straightforward: any manipulation to the name or the
author’s key will give a totally diferent hash, which means that a new
registration will be required, but an earlier registration will always be more
signifcant.

Now let’s imagine that a genius called Jack has invented a genius thing – a
flying machine. What is he going to do nette Best case, he creates a
prototype, fnds customers and starts chain production. However, Jack thinks
it’s beyond his resources. He realises only the mighty of this world have the
kind of resources he needs, what he wants is to be recognised for the
creative part of the project.
So, this is what he does. First, he describes his invention in detail. hhis
description has to emphasize him as a creator. In other words, his role in the
creation of the thing. hhis is the criteria by which we can see that he has
done his homework and it wasn’t just a randomly passing idea in the ether.
hhis case is actually less complicated than describing a book or a song or a
movie plot. So here, using the original tett will be enough. He only needs to
add a title with his name and his Etherium wallet address. 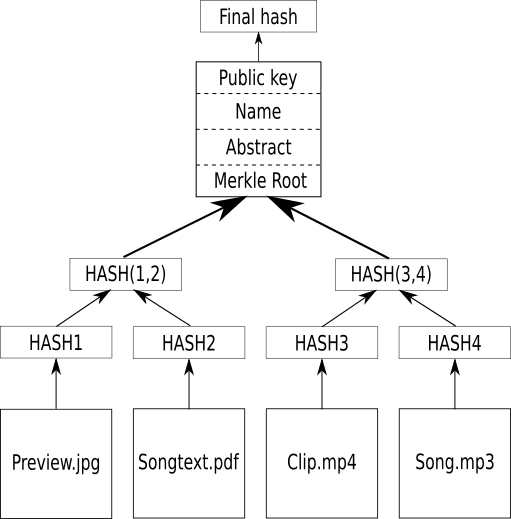 Then the hash sum is calculated from the resulting tett and saved in blockchain. 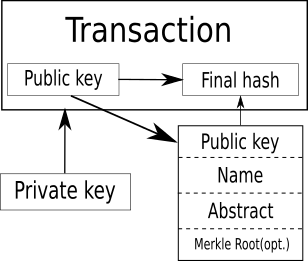 hhat’s it! Now the hash is saved in a certain block, the time of its creation is
publicly known, down to the minute. Anyone who then wants to save the
same idea, will have to do it in a later block which will make it easy to prove
who was the frst to claim ownership.
For convenience, Mr Berland created a simple smart contract which saves
the hash in the Etherium block chain. His basic version contains two lines of
code.
Also, Uriy says he is a beginning programmer, and asks to cut him some
slack on this one.
Source: https://bitcointalk.org/index.php?topic=4407806.msg39228825#msg39228825