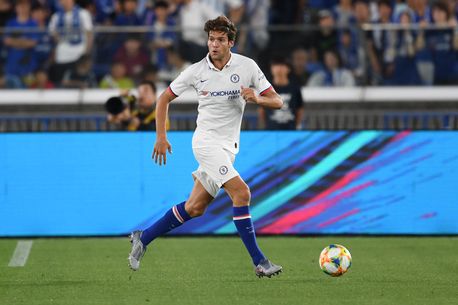 In my personal experience having watch a whole season of Sarri ball in which Chelsea won the Europa League and went on to secure the top four finish which ultimately qualifies them for UEFA Champions League. Sarri football is moving the ball with pace while keeping the tactics intact and team shape must be maintained in other to see formidable winnings streak and the players enjoying themselves. The team loosing shape is the reason we see Chelsea lost some games, they were meant to win.

In an interview with Alonso in Football UK, Alonso speak expressly about the current tactics and how happy they are currently under the management of Frank Lampard.

Lots of difference between Maurizio Sarri and Frank Lampard. Each manager has his own mind and style of playing football, and they are different. The first few sessions have been going very well. I feel very good playing what the manager wants in high intensity, trying to keep the ball and winning it back as soon as we lost it. Moving the ball side to side which help the full backs creative freedom as the manager wants. We are happy at the moment and the team spirit is very high and everyone is enjoying there the training rearing to go in the new season said Alonso....

Sarri football want to keep possessions and be patience to receive it when they lost it because of the shape in which Sarri tactics works. Frank Lampard brought 4-4-2 diamond which I think will best suit Chelsea judging from the current crop of players and what they can do.

However, the first two matches of the new season will be a very big test for Frank Lampard and his team to know where they stand in the new season and to stamp their title credential and fear into their opponent going forward. The game of football is more intellectual than tactics, if the team spirit is high and you have a compact team who look for each other both on and off the pitch. The sky is your starting point. Unfortunately, this is rare this days.

Elsewhere, Chelsea faces Barcelona in an International friendly preseason game in Japan on Tuesday and Alonso thinks the game will be a good test and the team are ready and eager to play. Both Kepa Arrizabalaga and Tammy Abraham are available again after their absence on Friday through illness and tonsillitis respectively, but he will have to do without N'Golo Kante who has returned home due to the ongoing issue with his knee injury.

Thank you for reading and cheers.