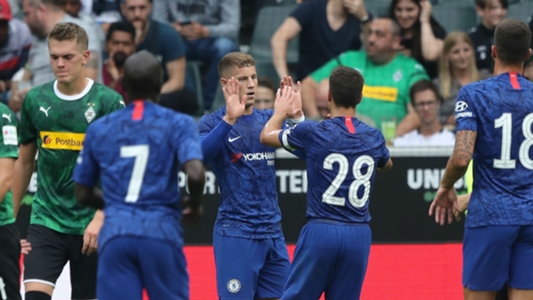 Chelsea preseason friendlies has now come to an end with the draw against Borussia Mgladbach. The match saw Chelsea conceded twice after wasting a lot of chances. The opponent also had several opportunities and the result could have been more of a mountain to climb for Chelsea. I also knew this current squad will have a say this season and this result shows that the team have the spirit to fight back in a game they might be loosing.

Borussia scored twice from Chelsea players mistakes and they fought back with two penalties awarded to Chelsea by the referee. I have heard people say that the both penalties are not penalties in the actual sense but for me, the referee made good calls right there.

The second penalty was well deserved coming from a player who is versatile and have grown so well under the new coach - Frank Lampard, the Chelsea Legendary Players. It was obvious he (Mason) completely beat the players and then brought him down just at the very edge of the box from the inside.

I am glad the young players have really step up to take of the huge mantle Eden Hazard left in the club. Mason has particularly grown so well and he is playing with confidence.

On the other hand, I love the new role of Ross Barkley and the fact that Frank Lampard want him to score like him, to have a good career like he did in his playing days.

I serious can't wait to see the season get underway, I will relish a chance to see young players step in all the clubs this season to show EFL is a force to reckon with in the world of football leagues.

Tomorrow, Liverpool take on Manchester City in Wembley Stadium in the community shield cup which always serve as the season opener to the Premier League itself. I want Liverpool to win it and I did be supporting them all the way tomorrow...

Make your predictions in the comment session... Let's get the conversation started...